Clinical trials at 17 domestic radiation oncology centers discovered 33.1 percent of rectal cancer patients who received a new preoperative chemoradiotherapy treatment found their tumor had gone, much higher than the 17.4 percent rate under traditional treatment, according to medical experts from Shanghai Cancer Center, who led the trials, on Monday.

Colorectal cancer is the fifth leading cancer in China and there were 376,300 patients in 2015, about half in the middle or terminal stage while being diagnosed.

Dr Cai Sanjun from Shanghai Cancer Center said the rise of colorectal cancer is related to a Western lifestyle. However, Chinese people have a poor awareness of prevention and screening compared with people in Western countries.

Traditionally, patients with locally advanced rectal cancer first receive a fluorouracil-based preoperative chemoradiotherapy then a surgery. However, this treatment only have 10 to 15 percent of patients with complete response (tumor vanished) and a more than 30 percent rate of cancerous spreading.

Doctors at Shanghai Cancer Center added a new drug called irinotecan to traditional chemoradiotheray with the guidance of the gene UGT1A1, which is considered an effective predictor of irinotecan-associated toxicities.

A total of 360 patients were enrolled in 17 radiation oncology cancer centers and the new treatment strategy almost doubled the complete tumor response, said Dr Zhang Zhen, who led the trial. “More patients with locally advanced stage are expected to have their disease under control and achieve long-time survival through a multi-disciplinary treatment,” Zhang said. 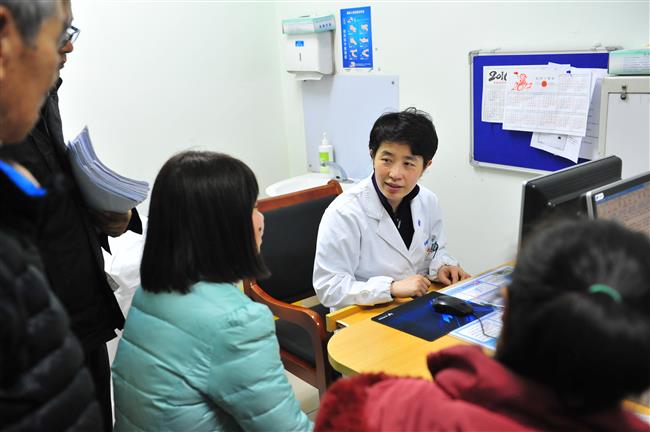 Dr Zhang Zhen, director of the Shanghai Cancer Center's radiation treatment center, talks to a patient and relatives at an out-patient clinic.