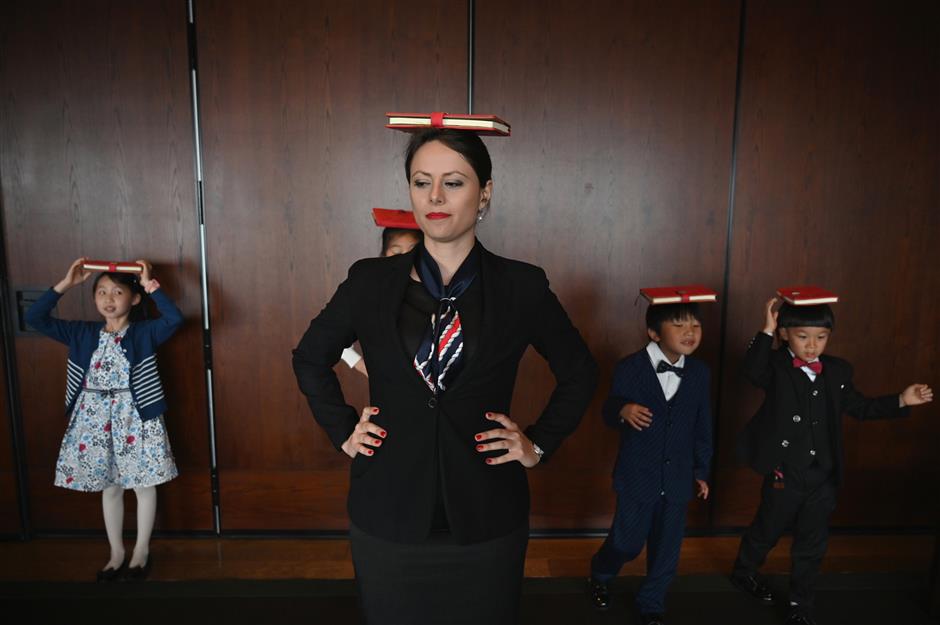 This picture taken on June 1, 2019, shows Danielle Liu (L) watching Miona Milakov walk with a book balanced on her head during an etiquette and manners class in central Shanghai.

Danielle Liu stares straight ahead, a book balanced precariously on her head, and carefully walks along a red line on the floor.

The 10-year-old's mother hopes the exercise will help make Danielle "a little lady" and allow her to shine among the offspring of China's ultra-competitive elite.

Danielle is with seven other young children spending their Saturday holed up on the top floor of a five-star hotel in central Shanghai for a class in etiquette and manners.

The four boys look dapper in bow ties, suits and shiny black shoes. The four girls are all billowing dresses and angelic smiles.

"You have a stability problem," Guillaume de Bernadac, the self-styled French doyen of all things etiquette in Shanghai, tells one boy of his attempt to walk and keep the book on his head.

If the children, who in this class are aged between nearly seven and 11, enjoy that exercise, they are less keen on having to sit straight and keep their elbows off the table at lunch.

"I'm scared," Zachary repeats as he attempts to eat his pea-and-mint soup while keeping two pieces of white paper tucked under his armpits.

The paper is to ensure they eat with their elbows in, but soon enough, the carpeted floor is littered with A4.

The children also have a red ribbon tied behind their shoulders to stop them slouching. Those that do are gently upbraided by de Bernadac or his staff in English or Chinese. 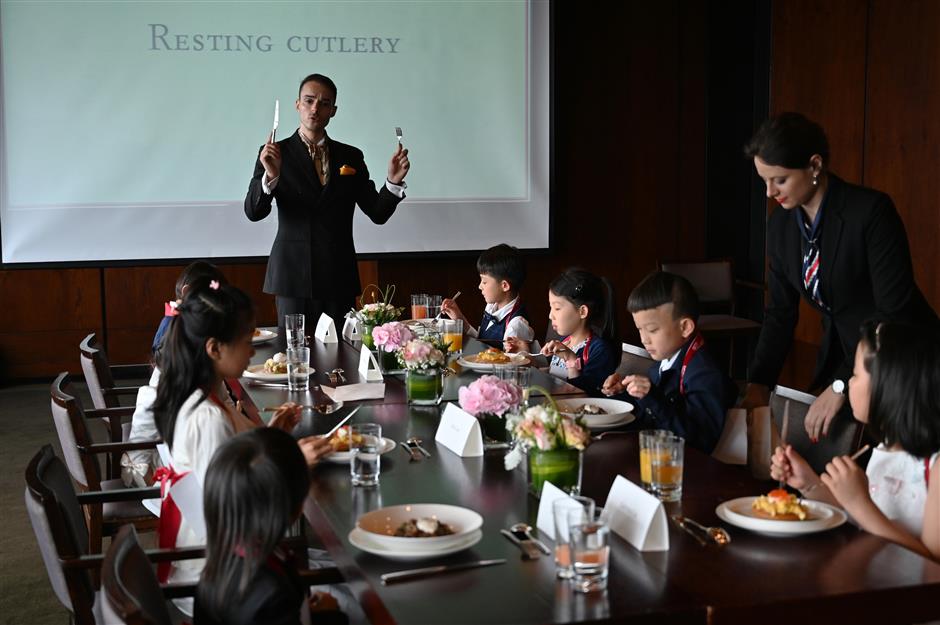 This picture taken on June 1, 2019, shows Guillaume de Bernadac teaching children how to use cutlery during an etiquette and manners class in central Shanghai.

Danielle's mother Cheng Liyan, who also uses the English name Shirley, wants her only child to be "perfect."

"To be lady-like, to be athletic, also academic, I hope she can develop herself in an all-round way," said Cheng, a teacher, in near-faultless English.

Danielle already takes part in extra-curricular swimming, piano and dancing, which is her favorite.

"I always talk to her and ask if she likes it," said Cheng, but admitted there is "fierce competition" to stand out in Shanghai, China's most international city and which has a population of about 25 million.

Cheng and the other parents pay the 31-year-old de Bernadac 2,688 yuan (US$390) for four hours of practical instruction for one child.

Against a soundtrack of classical music, the children learn social skills, dining manners and deportment — hence the books on heads to teach them to walk nicely.

Other exercises include how to introduce themselves and greet people, including "air kisses," and even what topics are appropriate to discuss at the dinner table.

De Bernadac, who first came to China as a student, says that demand has surged since he started his company Academie de Bernadac in 2014.