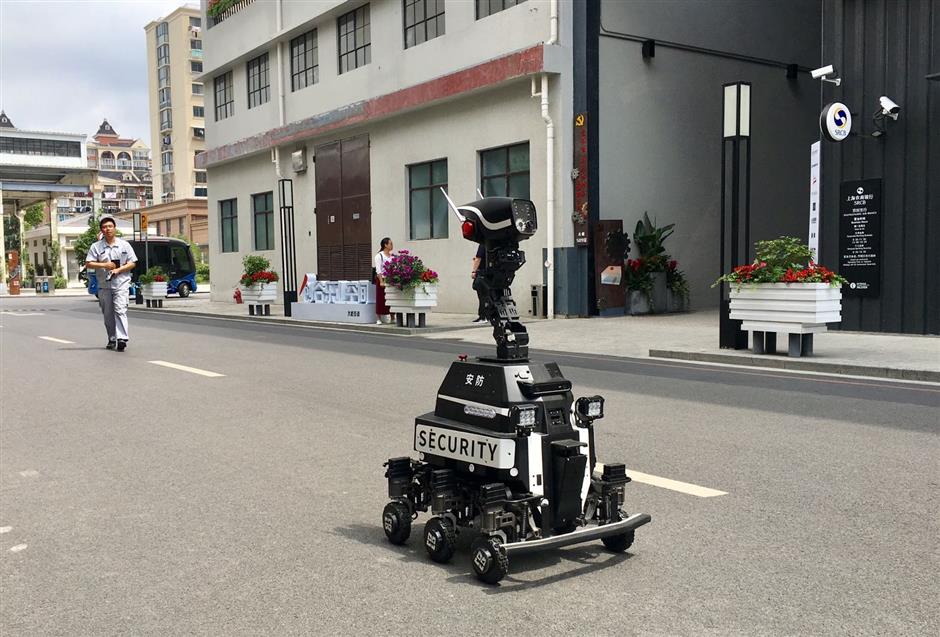 Intelligent robots, gadgets incorporating facial recognition, automated driving and the Internet of Things are everywhere you look at the Changyang Campus in Yangpu District. An unmanned shuttle bus known as Apollo carries guests around the campus.

China aims to take the lead in AI research and development, and the city has an “Intelligent Shanghai” plan to become a hot spot for AI.

Shanghai generates and uses a colossal amount of data — flows of people, cargo, vehicles and capital — making it an ideal testing ground for AI applications, said Zhang Ying, deputy director of Shanghai Commission of Economy and Informatization at the park opening.

Data and algorithms are the basics of AI research and the park on Changyang Road will create the best atmosphere for research on both, said Ding Huanhuan, deputy director of Yangpu. 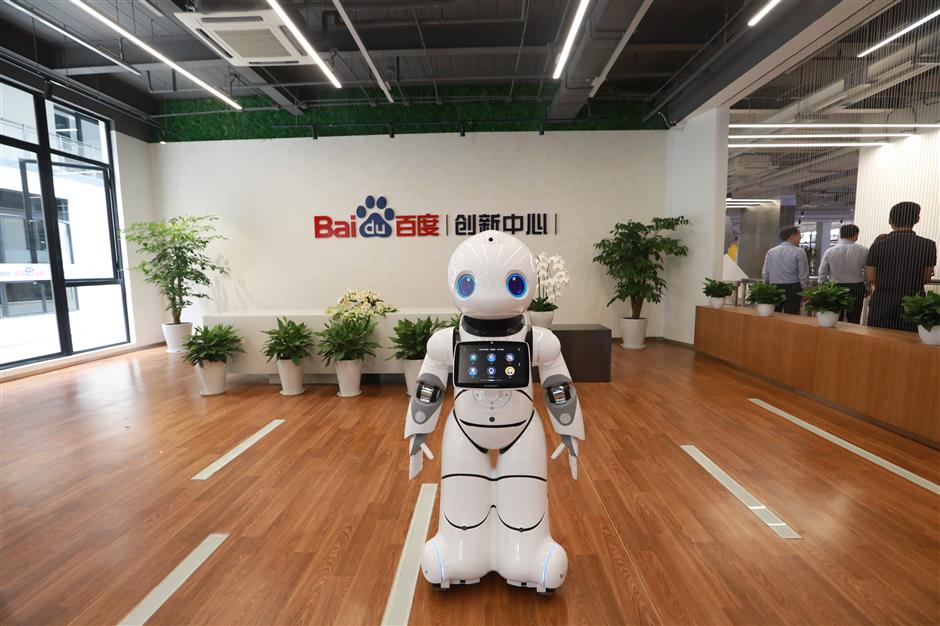 A robot is on duty in the Baidu innovation center at Changyang.

Essential to the plan is a 5G network that already covers the whole park.

About 20 AI specialist companies have moved onto the campus, making up about half of the enterprises there. They include teaching app Liulishuo, literally "fluent spoken English," AIWAYS Auto who is working with autonomous vehicles and Rontgen Medical whose interests are medical imagary.

Accenture’s Digital Hub, the company’s second research center in China, is working on the latest in robotic arms, an automated bus and manufacturing processes, and will help local enterprises achieve new levels of efficiency, the company said.

Baidu plans to set up its first innovation center in the campus, alongside an AI experience center.

“We are upgrading the safety and stability of the Apollo shuttle bus, which is already quite able to navigate local roads,” a Baidu engineer told Shanghai Daily on Tuesday.

A center for research into brain-like chips is also based at the campus. Operated by NeuHelium, a startup established by Fudan University, Yangpu District government and local AI company ENNEW in 2017, the center is focused on euromorphic chips capable of processing and reacting to information in real time like the human brain.

Entering the park, visitors encounter robots and unmanned vehicles. Zhang Xin, a manager with the park’s property management company, supervises cleaning and security across the site on his phone.

Three security robots patrol the site around the clock with facial recognition cameras to detect wanted criminals. They can alert the police the instant a suspect is detected.

The street-cleaning robots avoid pedestrians and parked vehicles. Two robots clean the whole park after being charged and emptied once a day, Zhang said.

A courier robot delivers parcels and another robot can charge electric cars parked on site.

Arms will soon be added to Roboway, the delivery robot, to make it be able to deliver food and even walk dogs, said Liao Liming, founder and CEO of developer Shanghai Xingjie Development Co. 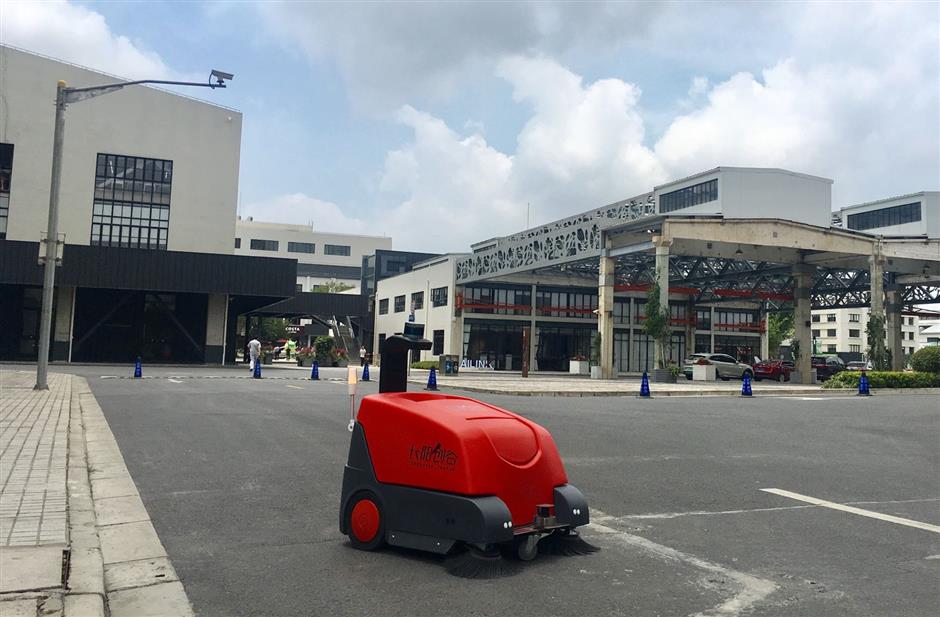 A robot keeps the campus clean. 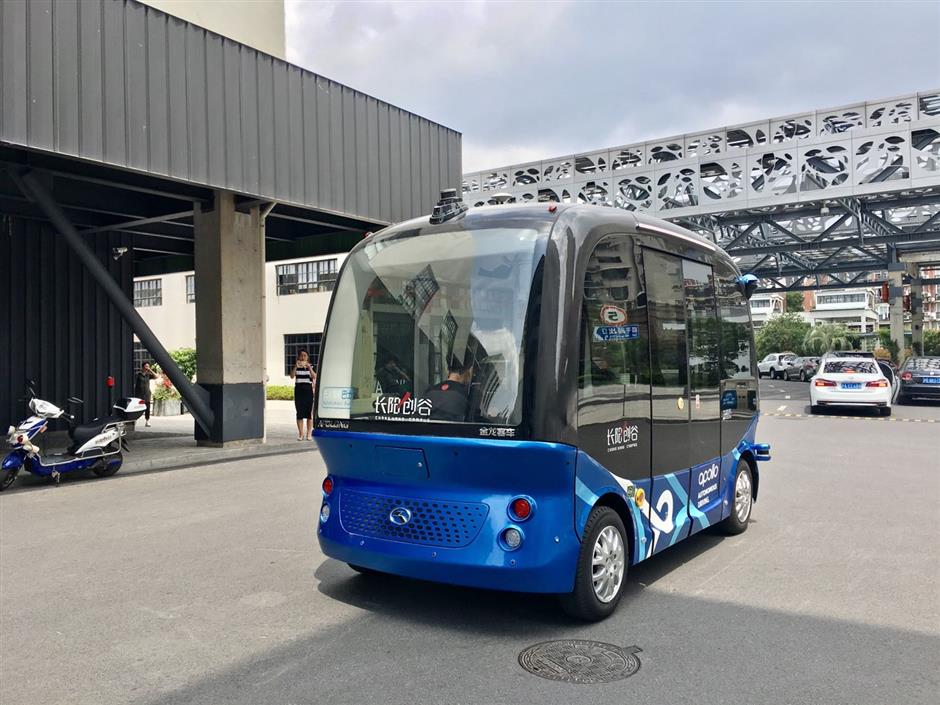 The Apollo unmanned shuttle bus ferries visitors around the campus.

Workers at the park can play with a table tennis robot or keep fit in an unmanned gym. AIPHA BOX, a renovated container with a ping pong table and a ball machine, costs 10 yuan (US$1.5) for 10 minutes. The robot inside changes tactics and difficulty based on the player’s proficiency, said Xu Jun, who developed the facility.

Xu said AIPHA BOX was developed for office workers and children to relax their eyes after staring at a screen for hours. His company is collaborating with Shanghai University of Sport to improve the experience, and boxes will be installed at innovation parks and communities.

An unmanned store, café and gym have robots making beverages, while other robots function as personal trainers at the gym. The unmanned store can learn what each customer wants within a few months.

The former cotton mill built by Japanese businessmen in 1920 was bought by the China cotton mill machine manufacturing company before it closed around 2000. It was renovated into the innovation park in 2014, and in 2018 Premier Li Keqiang suggested that the Changyang Campus become an international innovation hub.

Apart from the campus, 11 other sites will cover AI uses in administration, traffic, education and medicine.

Yangshan Port, Donghai Bridge and Lingang area, for instance, will be developed into a leading port and railway transport system.

The second batch of AI sites will be named soon, focused on bottlenecks in urban management, such as garbage sorting and traffic control as well as driving the transformation of agriculture and industry. 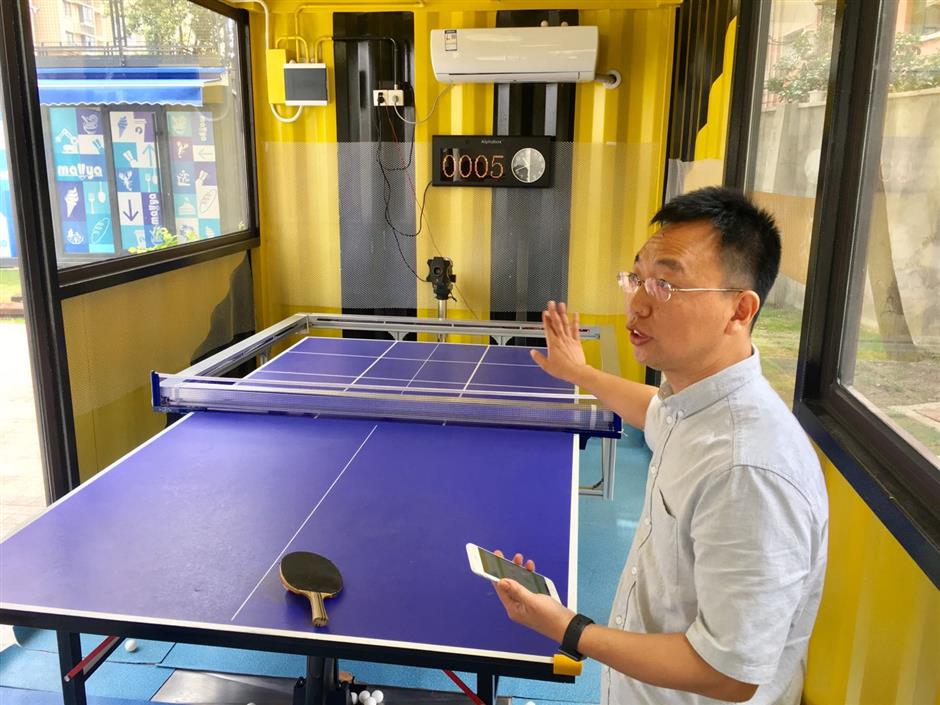 Xu Jun, developer of the AIPHA BOX, has put a ping pong robot in a renovated container. 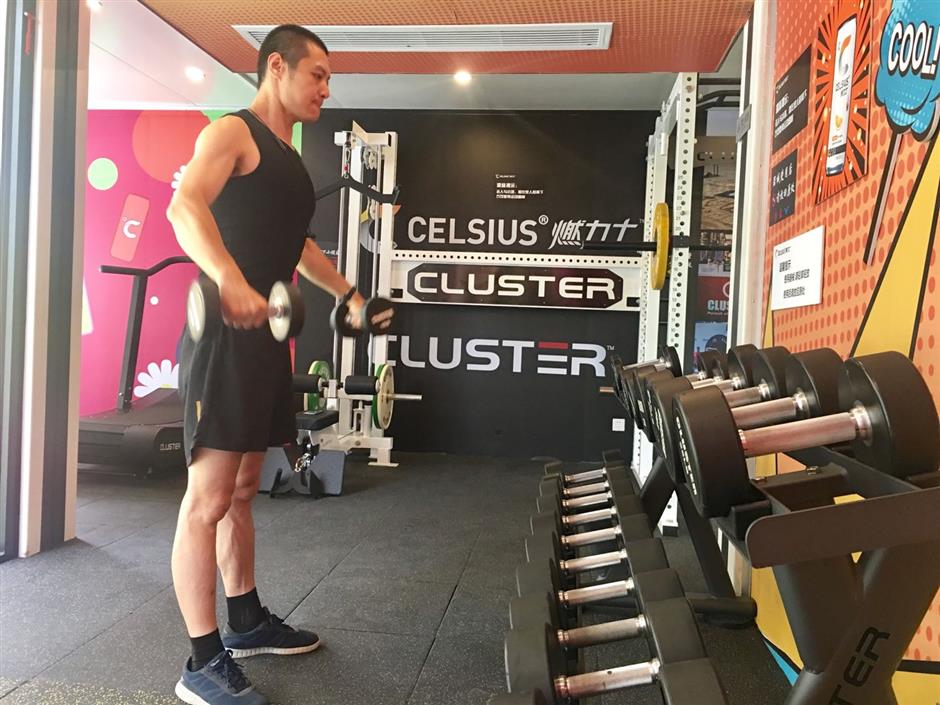 At an unmanned gym, AI can acts as a personal trainer.