Ship collides with patrol vessel as it tries to flee

A tanker suspected of smuggling crashed into a Shanghai Maritime Safety Administration patrol vessel as it tried to escape inspection on Monday.

The ship, Hongpu 228, was spotted on a suspicious course near the Yangtze River estuary around 6:20pm. Officers on patrol vessel Haixun 01 radioed the ship but there was no response before it tried to speed away.

When Haixun 01 caught up with the tanker and asked it to stop, it suddenly turned toward the patrol vessel, causing damage to both in the ensuing collision.

No one was injured but the administration's Pan Jiefeng said the incident was extremely dangerous and could have caused an explosion.

“They did it on purpose,” said Pan.

Hongpu 228 was handed over to the coast guard at 10pm and a tugboat towed it to dock at the Pudong coast guard’s wharf.

Hongpu 228 was suspected to be smuggling refined oil when it was spotted.

Xie Qunwei, deputy head of the administration, said vessels which tried to dodge inspections and made reckless maneuvers posed a great danger to shipping.

“Which is why we must continue to clamp down hard on them,” Xie said.

An investigation is continuing. 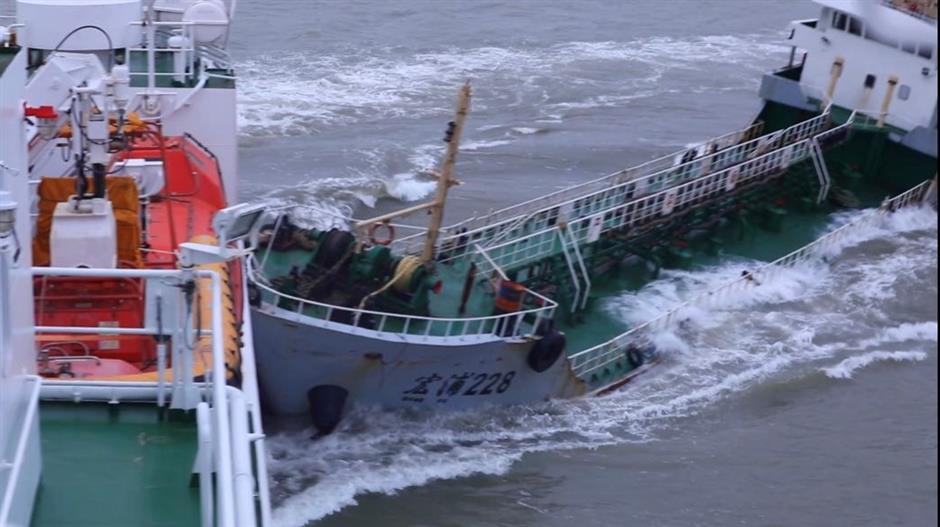 The tanker, Hong 228, is seen after it collided with a patrol vessel near the Yangtze River estuary on Monday evening.