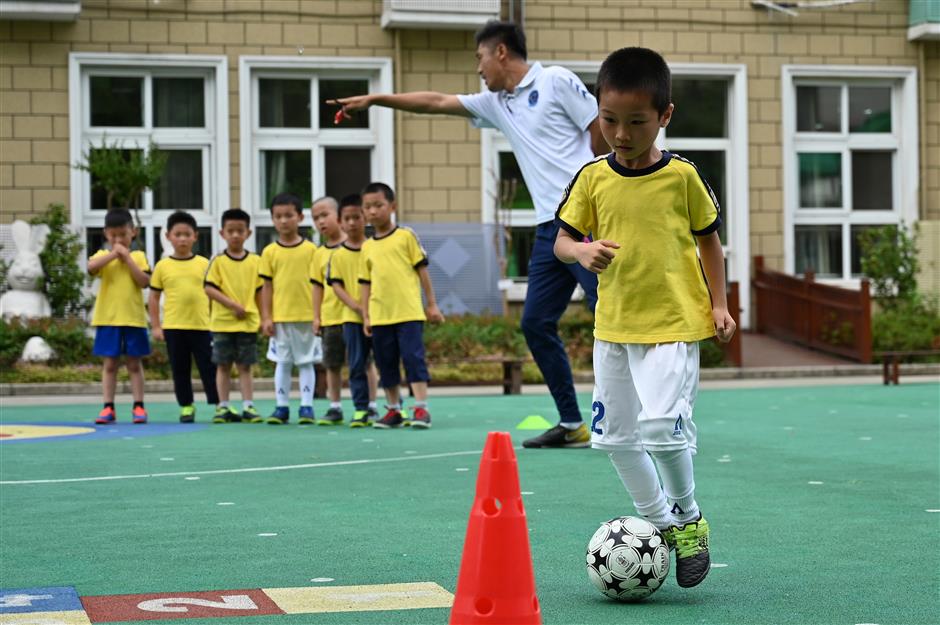 In this picture taken on June 6, 2019, students of Kangcheng kindergarten attend a football training session at their school in Minhang District in Shanghai.

Their heads soaked in sweat, a class of little boys practises Lionel Messi-esque stepovers at a kindergarten tucked between residential tower blocks in Shanghai.

They do not know it, but they are a tiny part of President Xi Jinping's aggressive drive to make China a footballing superpower by 2050.

At Kangcheng Kindergarten in Shanghai, 23 of the best boys aged 6 and 7 play football twice a week in what is their final year before primary school.

At some other kindergartens in Shanghai they play from as young as 4.

Zhu Guanghu, president of the Shanghai Football Association, says that when it comes to coaching, it is a case of the earlier, the better.

"I personally think 3-year-old children can play football as long as they can walk steadily and keep the ball at their feet," said Zhu, as a coach armed with a whistle goes through ball drills at Kangcheng Kindergarten.

"It's really important to lay the foundation for them at an early age."

There are nearly 200 kindergartens offering football in Shanghai, both boys and girls, he said, calling the sport "a particularly critical education."

The boys, wearing matching yellow T-shirts, spend most of the time with a ball each.

Exercises focus on control and dribbling, and they are told to use both feet.

Towards the end of the hour-long practice, they do one drill where they place the ball in front of them and, without touching it, alternate between left- and right-foot stepovers.

It is the sort of manoeuvre that Messi does at pace to tie opposing defenders in knots.

Rather than the Camp Nou and a fanatical Barcelona crowd of 100,000, the boys of Kangcheng Kindergarten are in the playground and have statues of cartoon rabbits watching.

Wang Zhilin's father does not play football, but he has hopes for his 7-year-old son.

"He wants me to be play for (Shanghai) SIPG," said Wang, referring to the Chinese Super League champions.

Perhaps one day little Wang will lift the World Cup for China.

But it would take a major improvement — the men's side is ranked 74th by FIFA and has reached the World Cup only once, in 2002.

They lost all three games and failed to score a goal.

There is particular concern about the dearth of quality youth players emerging, despite China having a population of 1.4 billion.

That is where the football-focused kindergartens come in, although the potential benefits won't be felt for more than a decade.

Kangcheng was ahead of the curve and has had football classes for two years. Its principal says that more parents want their children involved.

"We don't have sufficient time or manpower so it's only carried out as a small club for the time being," said Xu Rong, the principal.

"But of course if there are guarantees of human, material and financial resources in the future, I think we can expand this."

She and the Shanghai FA president Zhu say that playing football has wider benefits, such as making the children more attentive and more likely to show leadership.

"Europe has more than 100 years of professional football history, ours is only about 20 years old," said Zhu.

"There is indeed a big gap, but we will work hard.

"I hope we can quickly become a standout team in Asia and then in the world."