Working in the Metro, speaking to the world 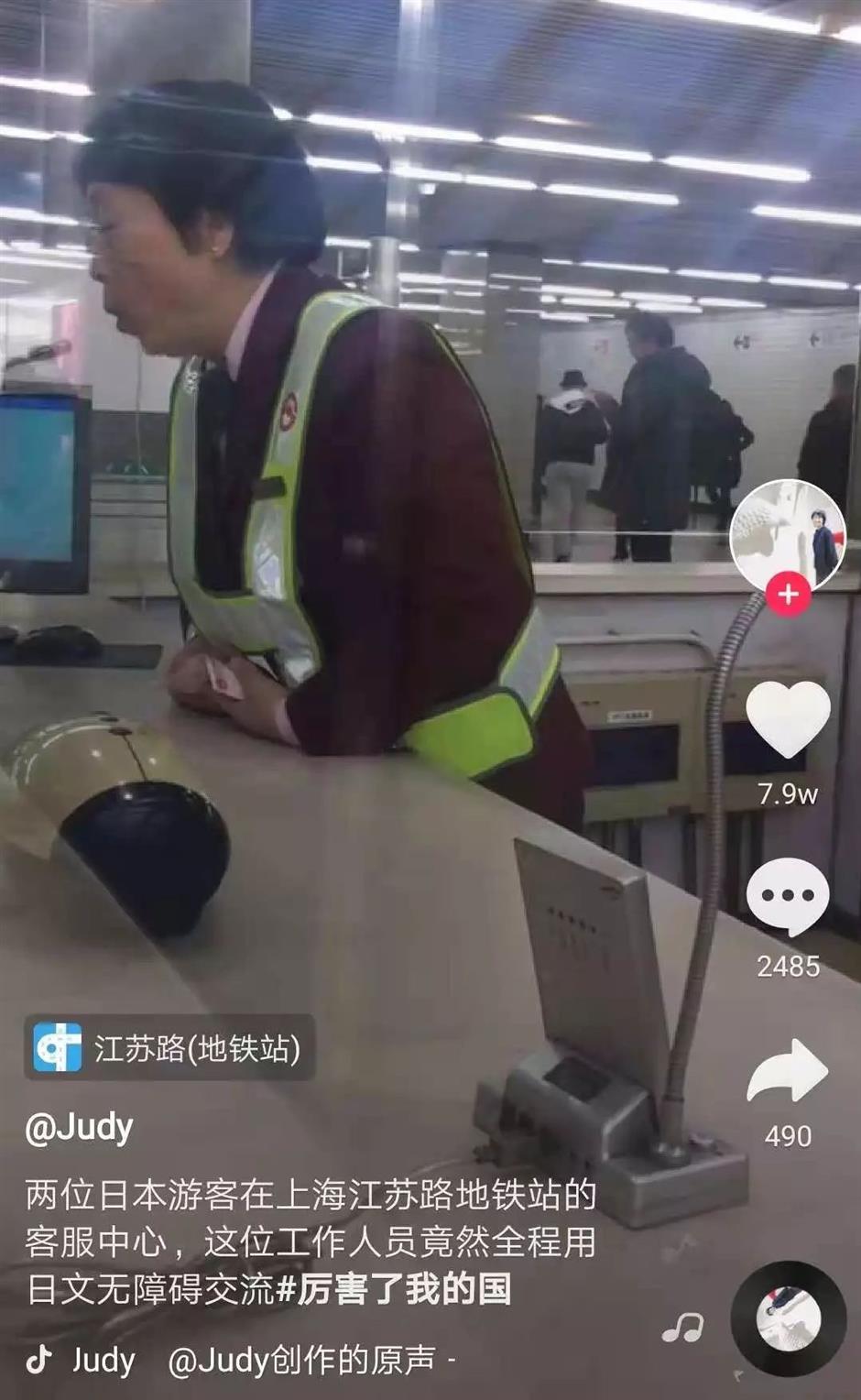 A screenshot of the video which made Wang Weilin an instant Internet celebrity shows her telling two Japanese passengers how to use the one-day Metro pass. Thousands of viewers gave the clip a thumbs-up, impressed by Wang’s fluent Japanese.

In the age of the Internet, strange and unexpected things happen all the time: People can be seen waiting in line for five hours to buy a cup of wanghong (Internet celebrity) tea, while middle-aged Metro station attendants find uncomfortable fame.

Wang Weilin, 46, is just such a Metro attendant. She became a “celebrity” after a short video of her helping out two Japanese passengers at a Metro Line 2 Jiangsu Road Station service center went viral last December. The video was uploaded by a passenger on short-video platform Douyin, known overseas as TikTok.

Wang was seen telling two Japanese passengers the price of a one-day pass and reminding them that they could take any train on the Metro for 24 hours after they first use the pass. Thousands of viewers gave the clip a thumbs-up, impressed by Wang’s fluent Japanese.

Scratch below the surface, and what is even more surprising is that she speaks a few phrases in more than eight languages, including German, Spanish and Russian, often just the basics such as "hello," "thanks," "how are you" and some numbers. Nevertheless, it’s a huge “wow” factor for bewildered and confused tourists to be addressed in such a way.

But a modest Wang is uneasy with the praise and acclaim, especially after recent Chinese media coverage claimed that she could speak eight languages.

“That was a complete exaggeration. I can communicate with passengers in intermediate Japanese and elementary English,” said Wang. “As for the other languages, I can barely say things like 'hello' and 'goodbye'.”

Wang joined Shanghai Metro in 2011 and has worked at various stations. Last July, she was transferred to Jiangsu Road Station of Line 2 where she found the number of foreign passengers much higher than where she had worked before.

Jiangsu Road Station only accepts electronic payments for public transport cards, and many foreigners don’t have this facility. Very few speak Chinese, which makes trying to help them problematic. The brief English training Shanghai Metro gives its staff is far from adequate.

Wang said she wanted to break through the “awkwardness of silence” when showing a foreign passenger to the exit or elevator.

“We are supposed to serve passengers and make them happy. It’s not enough just to stare at each other in the process,” Wang told Shanghai Daily. 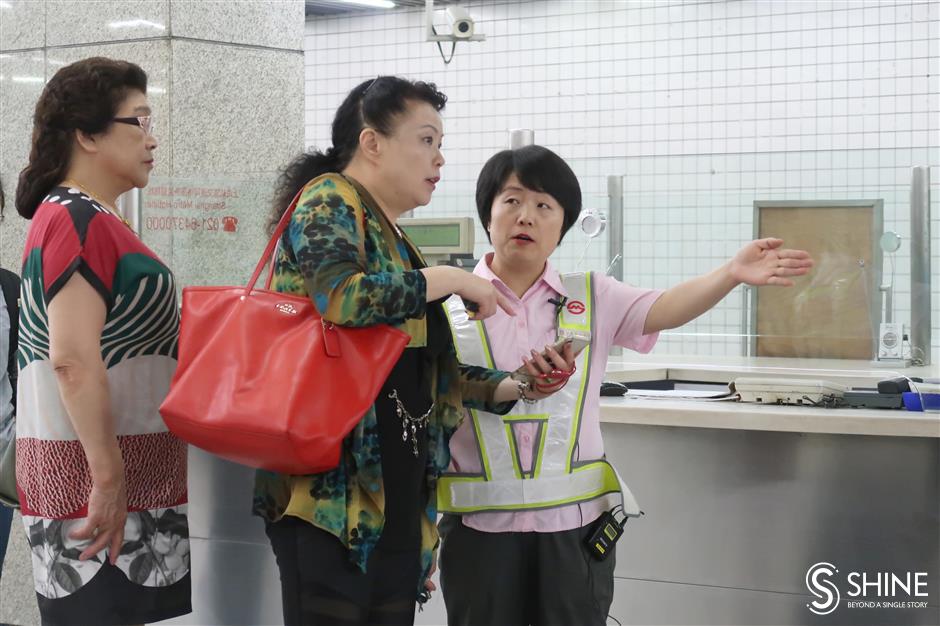 Though English is the universal language of today, she decided it would make passengers feel relaxed and cared for if she could just say even one or two words in their own tongue, such as "take care," "have a nice trip" and "you are welcome."

She normally asks passengers “Where are you from?” when she tells from their accent that English is not their first language. When they tell her their home country, she asks them to teach her a few greetings like "hello," "thank you" and "goodbye." She repeats the words as often as she can during their conversation. If she happens to know a few words of their language, she tries to use them, too.

“I have always been quite interested in learning languages,” said Wang. “It is the window to other cultures.”

However, at her age, learning is not such an easy task. More than 20 years ago, she attended a Japanese course and was working for a Japanese firm. She picked the language up quickly.

“I was quite fluent by the time I left, but that was a long time ago, and after so many years of not using the language, I thought I had almost forgotten it,” said Wang.

“The key to learning a foreign language is an authentic language environment. I don’t have a good memory, so I try to write down everything I learn if I have time,” she noted, pausing before adding, “though I don’t have much time to take notes while I’m working, which is another problem.”

At the station, Wang never misses an opportunity to learn and practice. If time allows, even if for just a few seconds, she tries to speak some English with everyone she can. 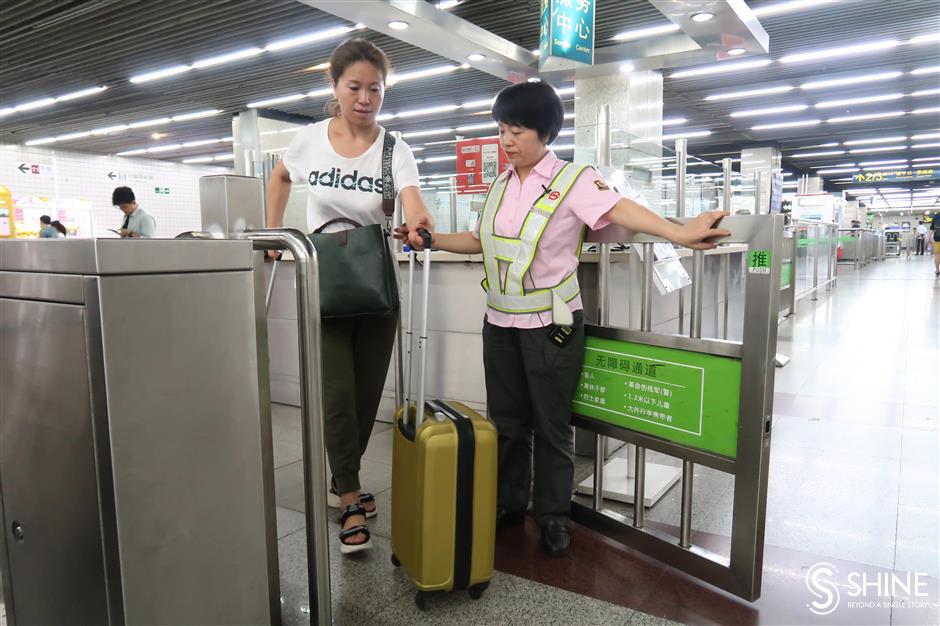 Wang Weilin helps a passenger leave through the ticket turnstile at the Jiangsu Road Station on Metro Line 2.

Thickly annotated on her tiny notebook are useful daily expressions for passengers in a diversity of languages such as German and Portuguese. She constantly looks over them whenever she can spare some time from her busy work.

“It takes me a lot of time to learn and my pronunciation is not so good, but I never give up because there is no better feeling than helping passengers. I feel happy when I see that they are happy.”

One day she greeted a Mexican mother and son using the Spanish word lindo. Lindo in Spanish means “beautiful,” in the masculine form, but can also be a noun. A lovely boy is a lindo. A few minutes later, she came across two men with a little girl in a pram. She guessed they were Spanish, or at least from a Spanish-speaking country, so she went up to greet them by saying “Hola” (hello) and "linda” to the girl (lindo for a boy, linda for a girl). They replied “Hola!” to her happily and added “Sou brasileiro” (“We are from Brazil”) in Portuguese. Wang quickly switched to Portuguese, saying “Oi” (hello) which caught the Brazilians by surprise. “Você é tão bom!” (You are brilliant) they said, walking away smiling.

Later, when they saw her at the station again, they waved frantically.

Through the years, Wang has made friends with many passengers. A German couple who live near the station come to visit her at the service desk from time to time. They teach her simple sentences in German, and in return, she teaches them simple Chinese. 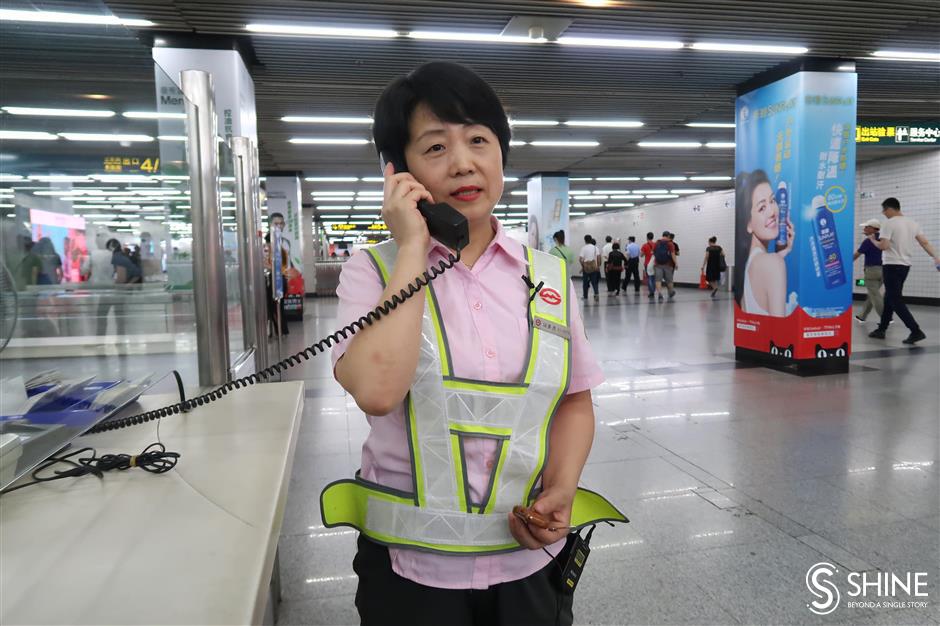 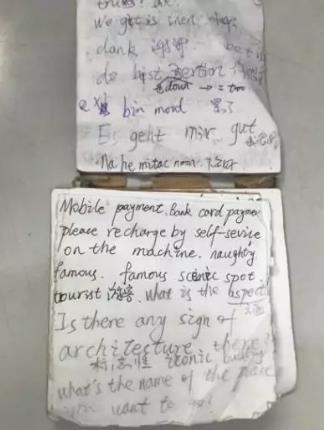 Thickly annotated on Wang's tiny notebook are useful daily expressions for passengers in a diversity of languages.

The Metro is often the first point of contact a visitor has with the city, and has a lasting impression which reverberates through a visitor's whole impression of Shanghai.

“I want people who do not know our city to fall in love with the place,” said Wang.

She has memorized brief introductions of many tourist attractions, and when passengers ask, she tells them that there is so much more to Shanghai than the Bund.

As a member of Metro staff, she thinks she can do more than simply offer directions at the station. She asks passengers questions like “How long are you going to stay?” and tells them the right tickets to buy. She even points out the best tour routes.

For Wang, all her efforts may just be rewarded with a smile or a heartfelt “thank you,” but it is more than enough. Such hospitality brings joy to those unfamiliar with the city.

“Many people fear that the more they do, the more likely they will make a mistake,” Wang said. “It is a very common concern among those in the service industry.”

“People come to the desk, asking abrupt questions, without even moving their eyes from their phones,” Wang said. “But it is my job to be kind and patient.”

Many just walk off, eyes still glued to the screen, before she has finished explaining, but she is pleasantly surprised to see how things have changed since her viral moment in the Internet spotlight.

“The other day a young girl came to our desk just to say 'hi,' and more people look at me with a smile while I help them. Some even take the tickets I give them with both hands,” she said. “Such acquaintanceship gratifies me. But I will be happier when all my colleagues are treated the same way.”

In April, Wang was invited by the China Central Television to go to Beijing and take part in a reality show called “Kaimendaji” in which ordinary people perform their everyday skills. She remembers shivering with nerves when the spotlight fell on her.

“If a woman like me can do something to make a difference, no matter how insignificant, we can all do more to help one another and to gain each other’s respect,” she said. 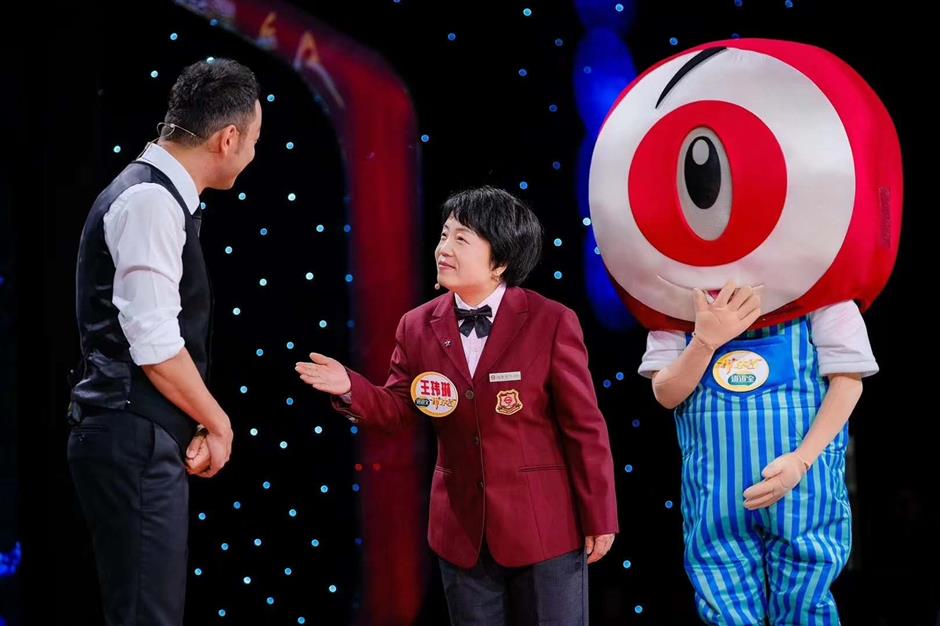