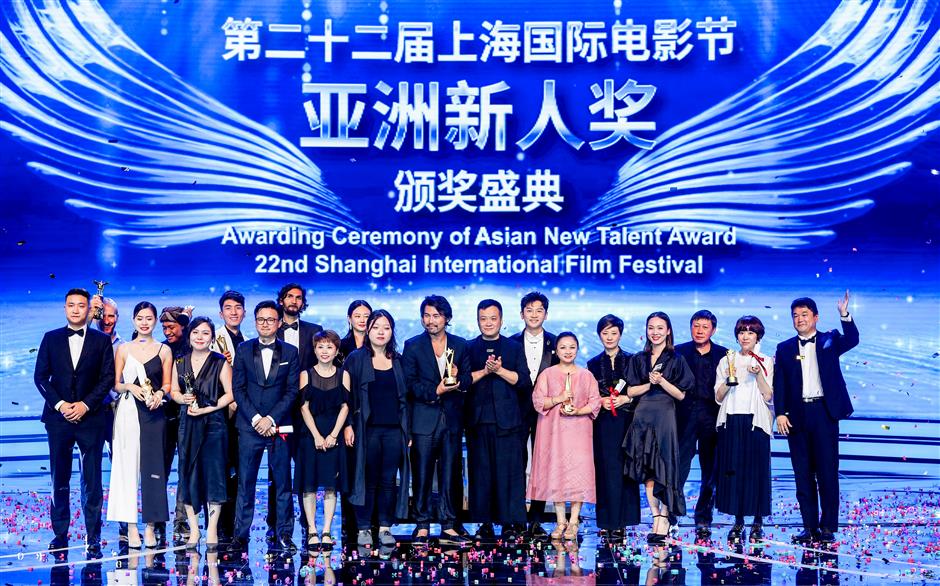 Winners and the jury pose for photos at the ceremony of Asian New Talent Award at the 22nd Shanghai International Film Festival.

Chinese-Canadian director Johnny Ma makes movies about the feeling of home. His "To Live to Sing," a story of a Sichuan Opera troupe, has won the Best Film of Asian New Talent Award at the 22nd Shanghai International Film Festival.

The jury praised it for its delicate, yet not flamboyant, portrayal of traditional local culture.

“I’ve been making movies to try to find feelings of home," Ma said.

"This time, I was brought to Sichuan, to the Sichuan Opera troupe, and I found home. Now at the Shanghai International Film Festival, I found the feeling of home again."

Zhao is a professional Sichuan Opera singer and expressed her gratitude for being brought to the world stage.

Japanese director Yuko Hakota won Best Director for her movie “Blue Hour,” about an overworked girl’s return home and the memory trip she then embarks on.

Hakota spoke her thanks in three languages, excitedly waving her award in the air.

The best actor award went to Malaysian Yuan Teng for his performance in “The Paradise.”

“When I was little, I would pretend like I was accepting an award, and I can’t believe ‘The Paradise’ now brought me here today,” he said.

Yusuf Radjamuda, the Indonesian scriptwriter of “Mountain Song,” received the best scriptwriter award. Radjamuda dedicated the movie to his hometown.

“Nine months ago my hometown was hit by a tsunami and earthquake, and movies can make their lives better," the native from a village in the Pipikoro mountains in South Sulawesi said. "So this is for them."

Indian Venumadhav Gajjalai won Best Cinematography for “Moan,” a film about longing for a dead mother and the conversation of life and death.

“Nowhere Put” was awarded the best live action short film award. It is a touching story of a daughter and a father who suffers from Alzheimers.