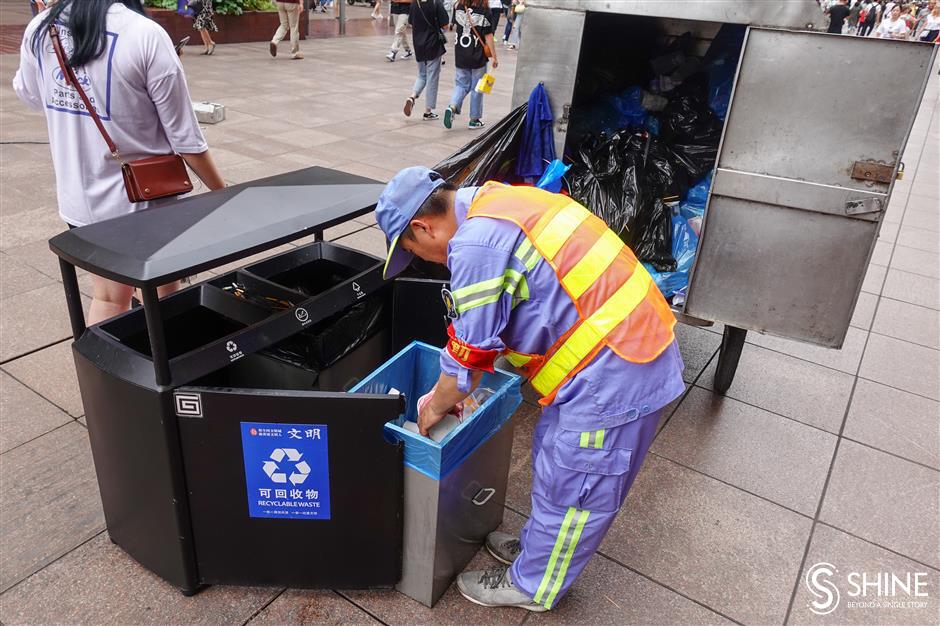 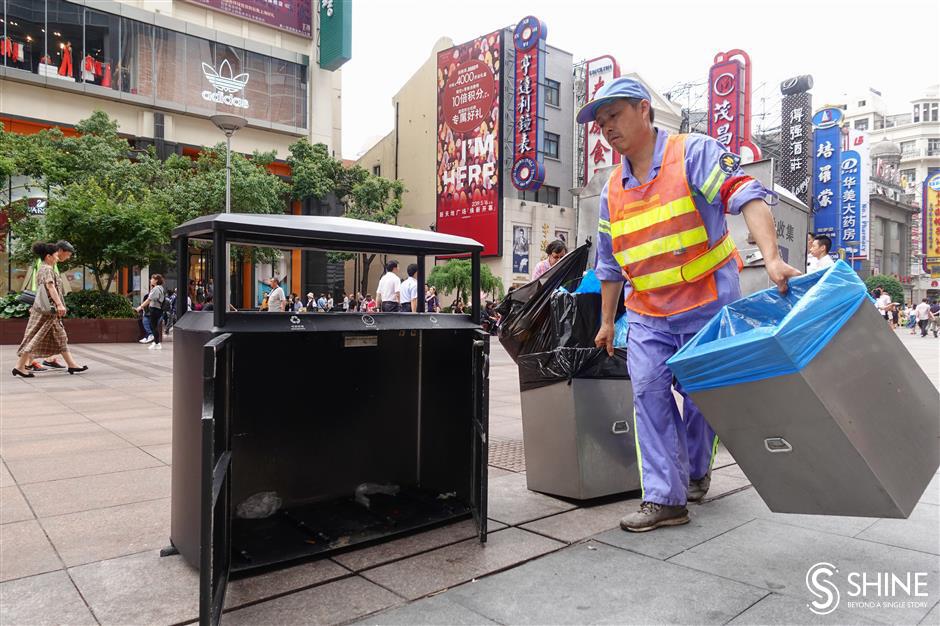 Shanghai’s tough new garbage management regulations come into effect on July 1 after months of carrot-and-stick efforts to persuade the public to sort trash into bins designated for dry, wet, recyclable and hazardous wastes.

Undercover visits by Shanghai Daily reporters to venues such as tourist attractions and Metro stations found a mixed picture of public compliance. Some people applauded them and some still expressed confusion.

Once the new regulations come into effect, violators may face hefty fines.

On streets and in Metro stations, only bins for dry trash and recyclable rubbish are provided. There are few bins around for disposal of food waste because eating is not encouraged in public venues.

Come July 1, people who dump takeaway food waste or other wet garbage into dry or recyclable trash bins face fines of up to 200 yuan (US$29).

Bins for wet trash are provided only in commercial or tourist areas with high concentrations of eateries, according to the Shanghai Greenery and Public Sanitation Bureau.

Bureau officials said bins aren’t provided for wet waste and hazardous trash in public areas to reduce the cost and improve the efficiency of garbage collection. It’s a common practice in other countries, they said.

People are urged to carry their own garbage bags to collect any wet waste they produce when out in public and then dispose it in bins back home. Residential blocks are equipped with bins for the four kinds of waste, and programs to educate people about sorting trash have been intensive.

But out in public, the sorting equation becomes more complicated.

"I didn’t pay attention to the signs on the bins," said a tourist from Anhui Province, after she dumped unfinished barbecue food into a bin for recyclable waste.

She added: "If there is no bin for wet trash at tourist attractions where there are a lot of food stalls, what are we supposed to do? I don't want to carry food waste with me all day while I am sightseeing.” 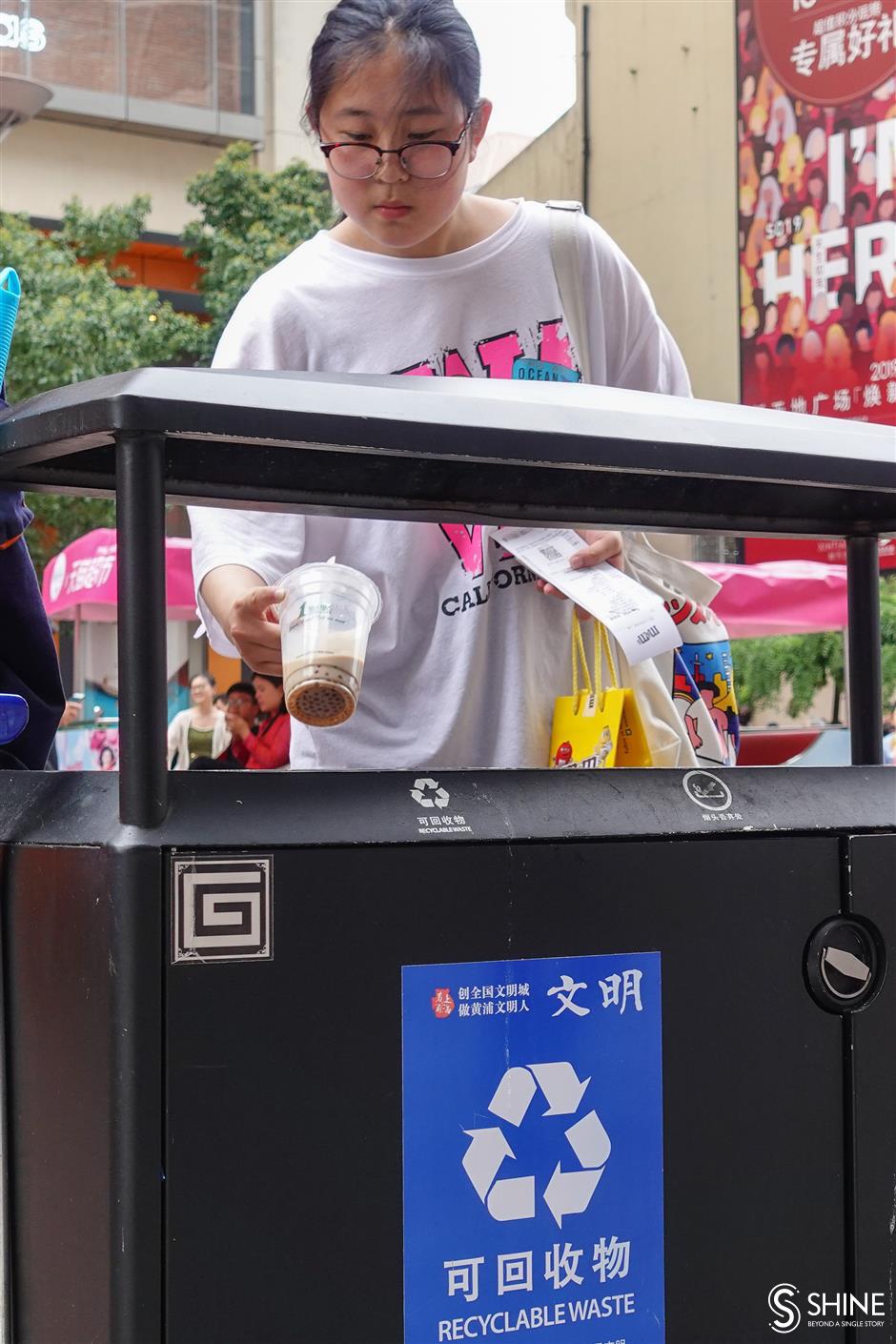 A woman drops a cup with milk tea inside into a bin for recyclable trash.

Liu Shuang, a tourist from Suzhou in neighboring Jiangsu Province, was more acquiescent.

"No bin for wet garbage in public areas reduces the workload of sanitation workers," she said. "I am willing to cooperate and take food waste with me until I find an appropriate bin to dump it.”

Authorities are cutting the number of waste bins in public areas in Shanghai to improve and adjust the distribution of bins, and make the public form the habit of correct dumping and the awareness of reducing the production of garbage.

Authorities are actually reducing the number of waste bins in some public areas in Shanghai. They say not as many bins will be needed as the public becomes more used to intelligent trash disposal and embraces environmental efforts to reduce waste.

On Nanjing Road E., the number of bins has been cut to 46 from 129 in recent months. The incidence of littering did not increase, Ping Yongshu, a street sweeper for nearly 30 years, said of his patch between Fujian Road M. and Xizang Road M.

"They were not removed all of a sudden, but in phases," said Shi Qi, who heads the sanitation team on the road. "We surveyed the area in terms of pedestrian traffic during the May Day holiday before we decided to remove the final 20 bins. We need to place more bins in crowded areas, and fewer or no bins in others.”

A Shanghai Daily reporter who stood along Nanjing Road E. for about 45 minutes saw no littering.

In Changning and Jing’an districts, garbage bins on roads and in public squares have been reduced to 1,000-plus from 3,000-plus. 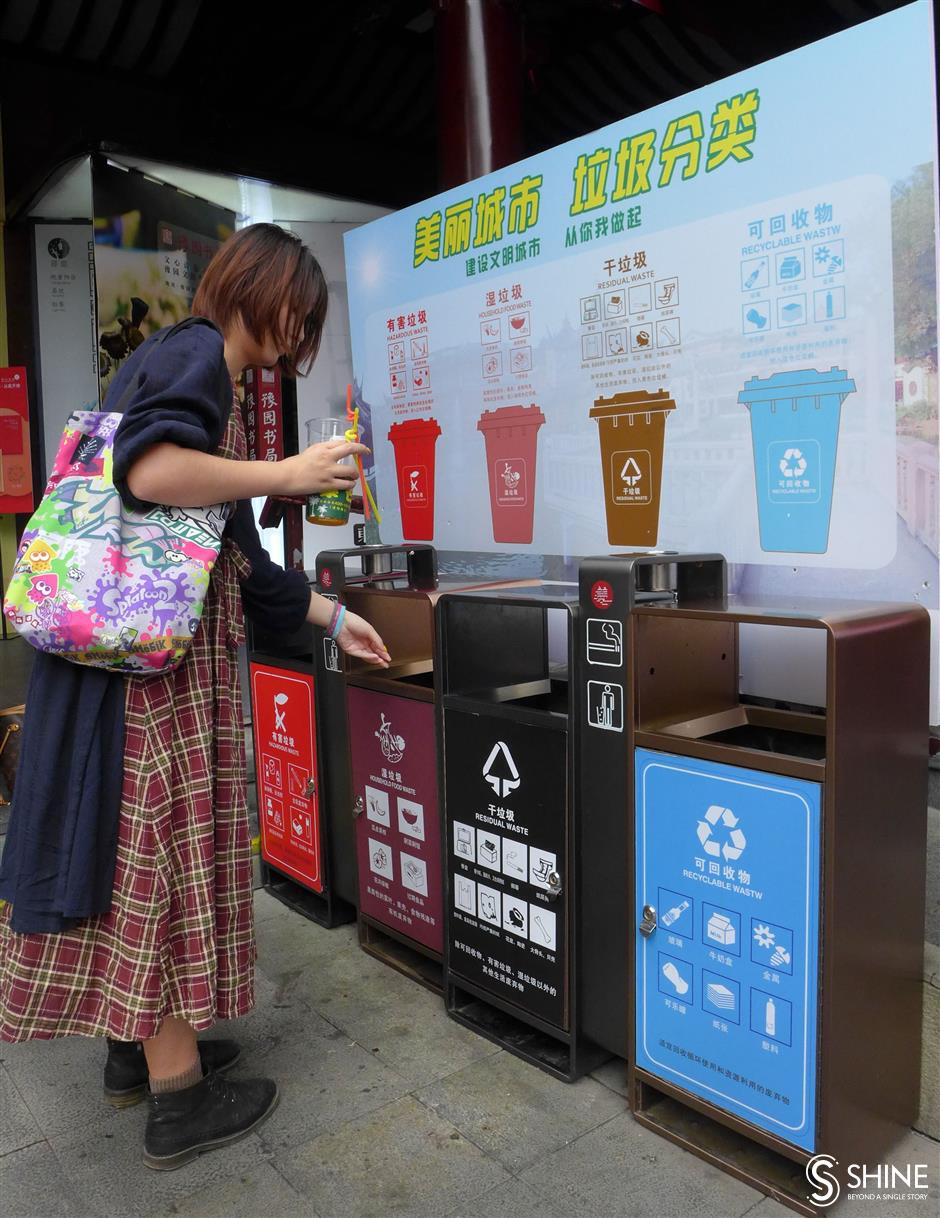 A woman drops trash in Huabao Building Square where there is high tourist traffic at the Yuyuan Garden Mall. Two sets of bins are provided there for all four categories, including hazardous waste.

At the Yuyuan Garden Mall, Wei Tianhai, a man in charge of handling Yuyuan’s trash, said there were originally 37 big bins in the mall area, which were changed to about 20 sets of categorized bins in April.

Now there are wet trash cans in the restaurant district, but only dry and recyclable waste bins in areas with few eateries. There are exceptions, of course. In Huabao Building Square, where there is high tourist traffic, bins are provided for all four trash categories, including hazardous waste such as batteries.

A sanitation worker surnamed Zhang, who keeps Zigzag Bridge Square clean, told Shanghai Daily that two bins had been removed from the square but she hadn’t really noticed any more trash on the ground. But some people still don’t dump trash in the right receptacles, she added.

“Some people try to put food waste in the bin for dry trash, so I have to tell them to walk 30 meters to the wet garbage can at the Nanxiang Steamed Bun Restaurant,” she said. “Most of them are happy to do so. It was a bit difficult at first, but now I don’t feel any embarrassment when I confront people. It’s just a matter of forming a habit.” 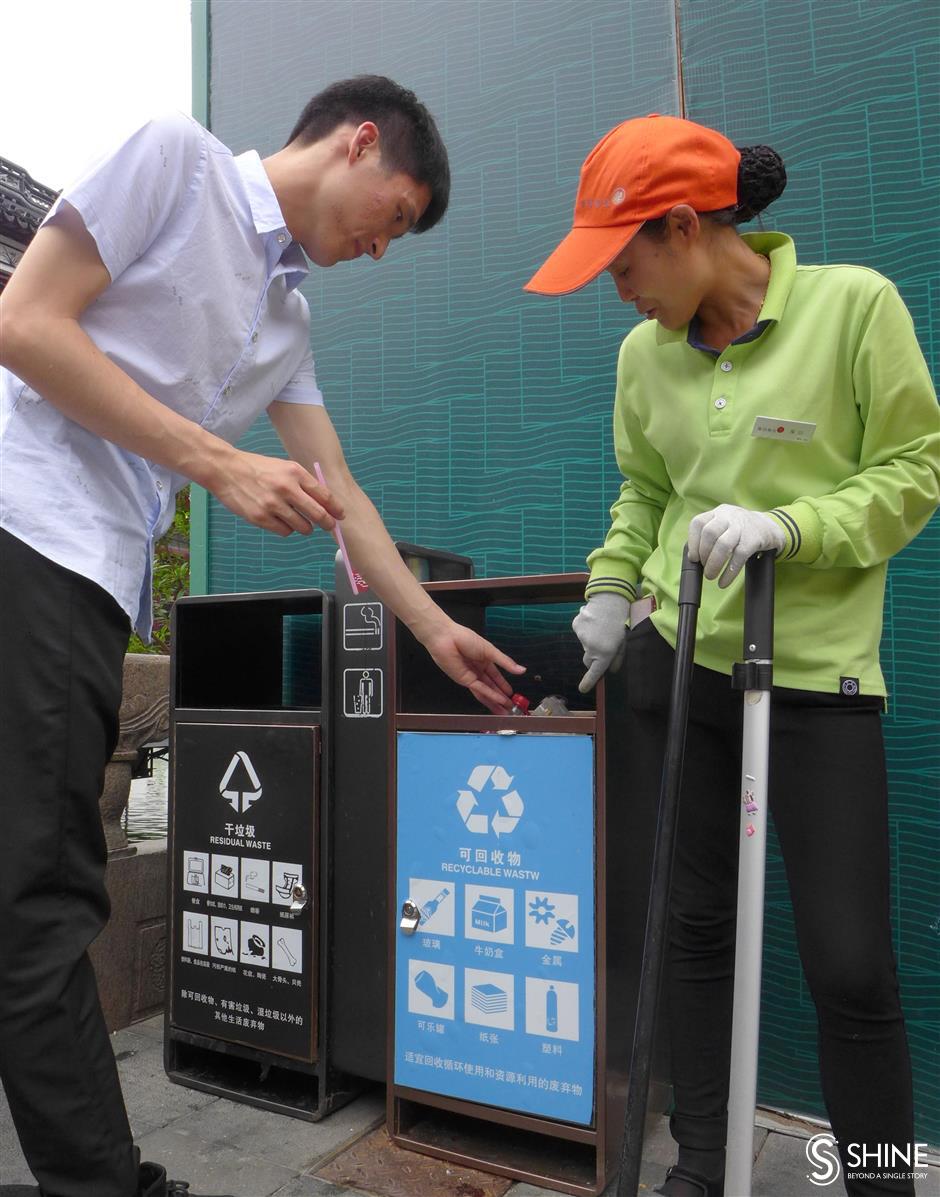 A visitor drops garbage when a sanitation worker looks on at Zigzag Bridge Square.

A reporter who spent about half an hour in the square didn’t see anyone dropping litter. Five tourists who were interviewed at the site said at first they found the new system irritating. However, when the purpose of trash-sorting was explained, most of them agreed that it is a good idea.

Another street cleaner said he now needs to clean up trash in his area every 10 minutes instead of 30 minutes in the past, but he approves of the new regulations.

The amount of trash on his route remains more or less the same, he explained, but fewer, smaller bins mean the waste has to be collected more often.

"Trash disposal has become much more orderly,” he said. “Shops must sort their garbage before I collect it, rather than just dumping it in any old bin on the street."

A visitor from Switzerland, who gave his name only as Giuseppe, said there really should be more garbage bins on the streets.

“People may just throw their litter in the street if there’s no bin at hand,” he said. “In Switzerland, we separate our household garbage at home, but on the streets, trash cans are for everything, and we have a lot of them. Otherwise, teenagers who go out at night and get drunk will just throw bottles in the streets.” 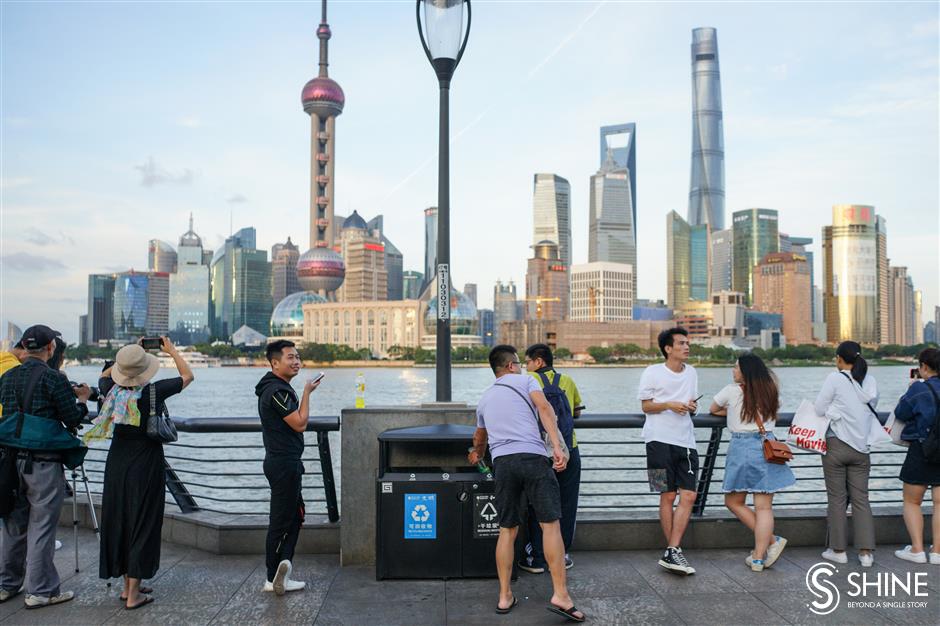 A tourist drops garbage in a bin on the Bund. 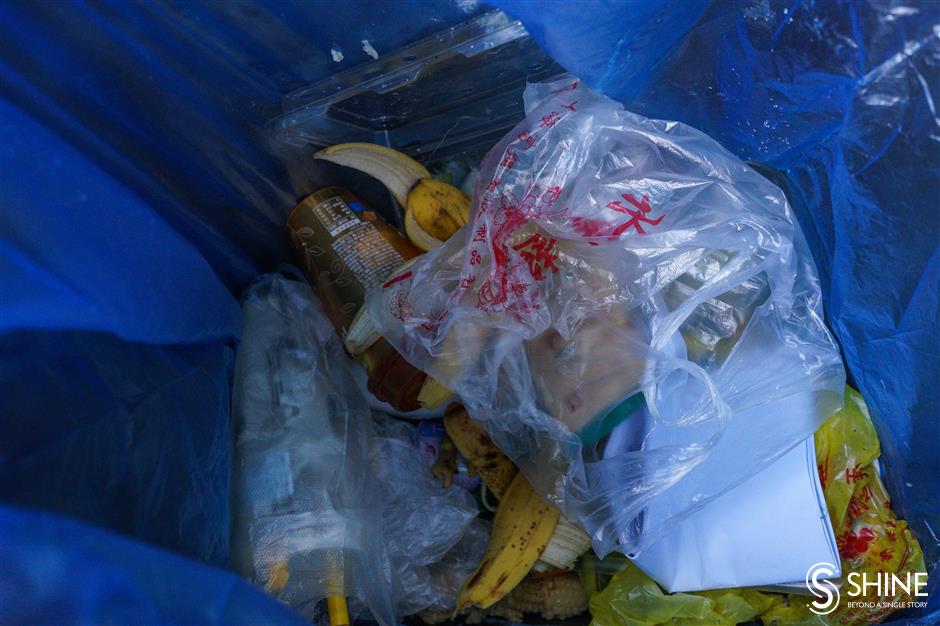 Banana peel is spotted inside a bin for recyclable wastes.

On the Bund, there’s still work to be done. Half-eaten biscuits and fruit peels were spotted in both dry and recyclable bins.

“I don’t know about the regulations or the different types of waste,” said a man who dropped an unfinished corn cob into a bin for recyclable trash. “There are so many types of trash. It’s all very confusing.”

“Garbage-sorting has become a hot topic of everyone in Shanghai these days, with July 1 approaching,” said Dai Wenwen, a local resident of the Bund area. “I try to remember each category of trash, and I don’t eat food in public areas. I think garbage sorting is important and necessary.”

People may have to think twice about eating breakfast or snacks in Metro stations once the new regulations come into force.

All stations have bins only for recyclable and dry garbage.

Wet waste bins aren’t provided, according to the Shanghai Landscaping and City Appearance Administrative Bureau, because the city does not encourage people to eat in public places.

The bureau conducted a survey that found most trash generated in public is dry or recyclable.

Passengers who want to eat in transit should carry bags for wet waste and take them home to deposit in appropriate bins.

Less than a week before the regulations take effect, a Shanghai Daily reporter checked out several Metro stations on litter disposal.

At the West Nanjing Road Station of Line 2, bottles were found in dry garbage bins and an apple core was found in a recyclable bin.

The reporter stood near the bins for about 10 minutes and saw about seven people throwing away tissues, paper and empty cups in bins chosen at random.

One passenger threw a Starbucks coffee cup into the dry garbage bin, with her eyes fixed on her phone, not on the bin.

Another passenger hesitated in front of the bins for a while with half a cup of bubble tea, then he decided it should go into the recyclable bin.

“I can’t finish it. I’m full,” he said when queried about his choice of bin and then walked away.

Shanghai Metro said staff will do their best to explain rubbish disposal to passengers who violate the rules or don’t understand them.

“We can’t issue fines, but urban management officers will be able to do so,” a Metro official explained.

An unfinished apple is spotted inside a bin for recyclable waste at West Nanjing Road Station of Metro Line 2.