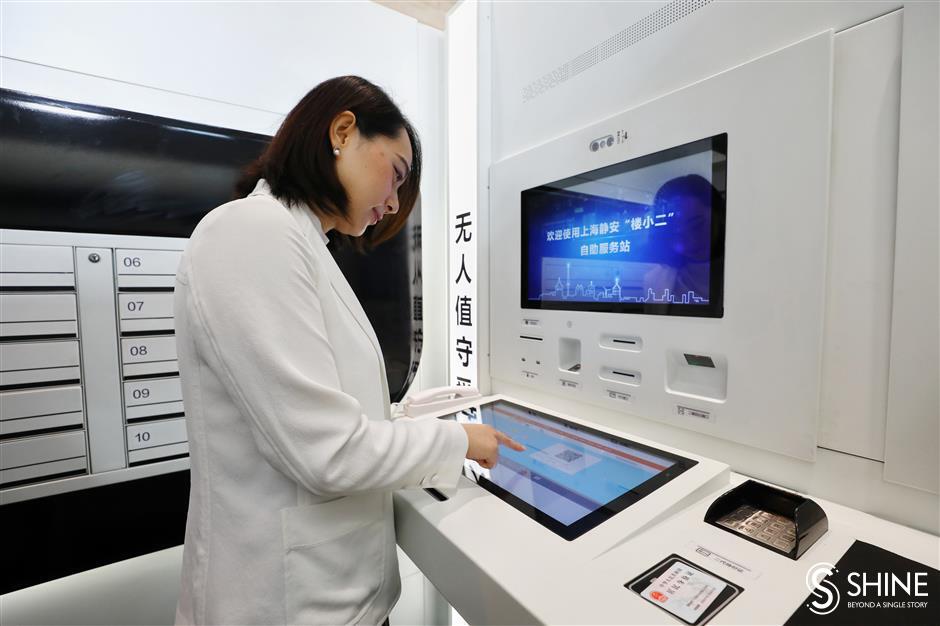 A woman processes information at the 24-hour services station in Park Place.

Jing’an sits at the heart of Shanghai. It represents the essence of the history and culture of the city, home to century-old buildings, big-name attractions, glitzy retail malls and charming art galleries. Annual music and art events give the district a distinctive ambience. In this series, we showcase the highlights of Jing’an

Despite being one of the smallest districts in Shanghai, Jing’an District is home to 80 regional headquarters of multinational companies, accounting for nearly 12 percent of the city’s total. Why is that? A primary factor: efficient services.

To achieve that, Jing’an says it will attract major global consulting firms, law offices and other services industry leaders. That means both domestic and overseas companies will be able to enjoy one-stop, world-class services.

The district says it hopes to add at least 10 such service companies and more than five new multinational regional headquarters a year. “We always believe that the government serves companies and companies serve the globe,” says Zhou Haiying, deputy director of Jing’an.

The first step in the campaign is the introduction of a 24-hour services station.

The eight-square-meter cube station is in a corner of the first floor of Park Place on Changde Road, where 41 companies set up offices — 40 of them foreign.

Equipped with technologies such as facial recognition and footprint scanning, the station provides more than 200 services, related to everything from personal business to corporate affairs. Answers to questions are just a quick call from phones there.

Among the first group of users was Qinyi Management Consulting Co. He Guangbin, a staff member of the company, used the firm’s business license and other documents scanned in the station to obtain a USBkey, which is necessary for the company to do electronic commerce.

“Previously, we had to visit the administrative affairs center to apply for it, and it usually took us two to three days,” he says. “But now, we don’t have to stand in queues, and everything can be processed here in just several minutes.”

Chen Jiaxin, from L’Oréal China, went to the station during her morning break to check the status of the housing fund. “It’s as convenient as a selfservice bank,” she says.

According to Huang, express delivery service will be available in the near future.

“Not everything can be done through the online platform,” he says. “Sometimes, duplicates of forms and documents are required to be sent on to other authorities for further approval. So, we allow people to lock the documents in safety deposit boxes installed in the station, and we arrange deliverymen. Clients are kept informed through short messages.”

Jing’an has gathered together 20 service organizations listed under the Globalization and World Cities Research Network, an organization that studies the relationships between world cities in the context of globalization. The network keeps a list of reputable service providers, and Jing’an has a third of such providers in Shanghai. They include consultancy Bain, accounting firm KPMG, advertising agency J Walter Thompson, law firm Jones Day and bank BNP.

Being internationally friendly is a prime talking point in Jing’an’s efforts to attract and keep overseas talent and foreign company offices.

“Shanghai is portal city where foreign companies enter China and domestic companies expand into overseas market,” Zhou says. “Jing’an, as one of the most international districts in China, should play a pioneering role and use its advantages to support the city’s campaign to become a major global center.”

“Authorities should make their needs as a top priority and create a great ecosystem based on their needs,” he says.

By the end of 2022, services provided by the government will all be bilingual. Major communities and public venues will provide such language assistance to make foreigners feel welcome and at home.