From residential communities and enterprises to public areas, the awareness of garbage sorting is at an all-time high among residents.

Garbage sorting has become the hottest topic in locals’ daily chats. It is an “lesson” that all people in Shanghai are taking.

The regulations approved in January by city legislators include all aspects related to waste sorting such as the categories of the four types of trash, namely the dry, the wet, the recyclable and the hazardous, the collection, transportation and treatment of waste, the responsibility of all people involved, and supervision and management.

People in Shanghai can be fined up to 200 yuan (US$29.13) from today if they fail to sort garbage properly and refuse to fix the problem.

The legislation commission of Shanghai People's Congress explained that wet garbage requires as precise sorting as possible to enable it to be made into useful biological substances or disposed without harming the environment, and residents are encouraged to sort out recyclable garbage as dry waste will be mainly burnt up in disposal.

Meanwhile, garbage collection with fixed schedules and spots will be further carried out because it is a key measure to ensure that parties responsible for looking over garbage sorting can effectively instruct residents on it, the commission said.

But it also calls for the managing parties to sufficiently communicate with the residents on the measure when introducing it and try their best to provide convenience to the residents, including making up for the fixed schedules with garbage-collection spots open outside the schedules.

In terms of punishment to people who fail to properly sort out their garbage, the commission said in most of the punishable cases, the offenders will be given an education when first uncovered, but they will be punished if caught on the offenses multiple times and refusing to abide by the rules. 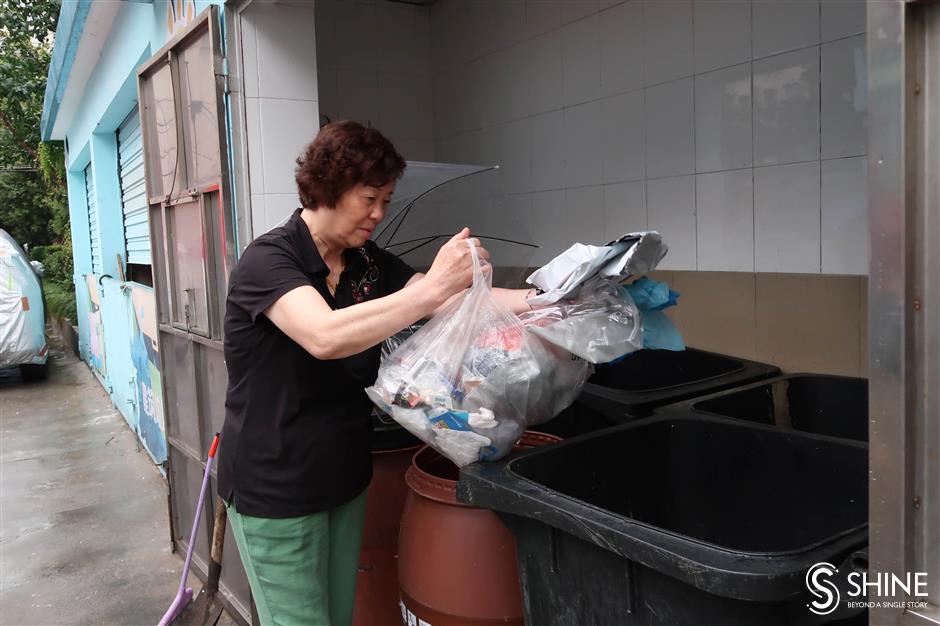 A resident at Taojiang residential complex dumps dry garbage into the designated bin.

"I have bought and prepared four garbage bins at home, and I bring well-sorted garbage to the dumping spot in the morning, at lunchtime and at night," said Fan Meiling, a resident of the Aibo No. 5 residential complex in Minhang District, which has more than 2,000 households.

Garbage-sorting facilities were in place at the complex one and a half months ago.

"I have been used to garbage sorting with knowledge acquired from promotional materials and television programs," said Fan. "I know each type of garbage clearly, and carefully sort napkins out from food trash as it is dry."

The complex has nearly 200 volunteers to assist in garbage sorting.

It has several intelligent garbage-collection machines which allow residents to dump garbage with a simple click, and the doors of corresponding garbage boxes will open then. The machines will also alarm workers automatically once any box gets full.

A total of 13,000 garbage-dumping spots at residential complexes citywide have been upgraded in accordance with Shanghai's waste-sorting requirements, accounting for 75 percent of all residential communities, according to the Shanghai Greenery and Public Sanitation Bureau.

Zhang Yong, an employee of Shanghai Spring Tour, has already adopted good habits for waste sorting, at work and at home.

"Bins for dry and wet trash were installed in working places in February and March, and we learned how to correctly sort garbage in trainings," she said. "We also participated in tests organized by the company to get ourselves fully ready for garbage sorting.

"We put dry trash into bins near desks, and wet garbage into bins placed at the tea area, and inspectors of our company checked whether we sorted properly," she said. "At canteens, we also sort wet and dry trash."

About 40,000 garbage bins on the streets have also been upgraded, according to the Shanghai Greenery and Public Sanitation Bureau. 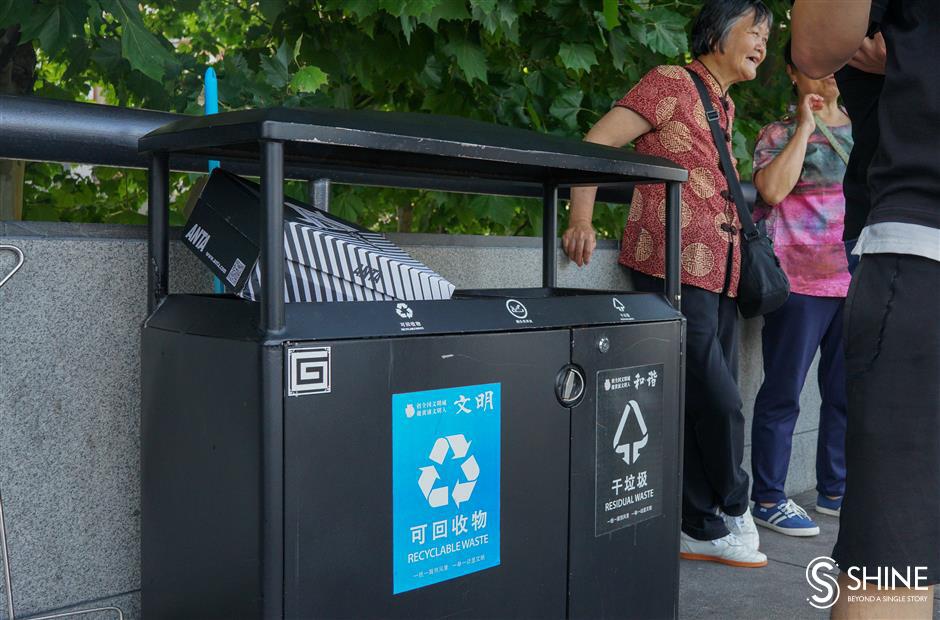 Different garbage bins are set up along the Bund.

On the Bund, a Shanghai grandmother surnamed Lin put her grandson's unfinished apple into a prepared plastic bag. She said she will take the trash home.

"Garbage sorting is good for the environment," Lin said.

"There is no bin for wet trash in public venues, and I used to carelessly drop food trash into the dry bins," she said. "Now, I bring two bags as garbage bags when I come out in case my grandson produces food garbage when he is hungry."

In most public areas such as streets and Metro stations, there are only bins for dry and recyclable waste because eating is not encouraged in public venues.

Construction of the collection, transportation and treatment facilities has been beefed up in Shanghai to ensure that already sorted garbage is handled properly.

A collection and transportation system of sorted garbage has been formed, and the city now has 982 vehicles for wet trash and 3,135 for dry trash, according to the Shanghai Greenery and Public Sanitation Bureau.

There are another 49 vehicles for hazardous waste, and 32 for recyclable items.

"Residents are also encouraged to tip off authorities by calling 12345 or via WeChat account (Where is trash going) if they spot mixed collection or transportation of already sorted trash."

A number of social supervisors will be hired to help spot irregularities during garbage sorting, including mixed collection or transportation, he said.

About 3,312 tons of recyclable items are collected daily citywide, and 6,164 tons of wet garbage are sorted out daily, according to the bureau.

The regulations state that a "designated spot, designated time" dumping system will be implemented in the city gradually.

The system has worked in improving the effectiveness of garbage sorting and enhances residents' sense of participation, said Tang Jiafu, deputy director of the bureau.

"Different residential complexes can have different practices based on their real situation, and it involves communication between neighborhood committees, property management companies and property owner committees," said Tang.

Arrangements should take into account the working times of people and seniors living in the residential complexes, and intelligent measures such as card-swiping before garbage dumping can be used as well, he said. The city has worked out 18 supporting policies for the regulations.

Among them, hotels in Shanghai will stop providing six disposable items such as toothbrushes and combs from today unless guests request them.

"Hotels should not place these items at rooms without the request of guests," said Jin Lei, deputy director of the Shanghai Administration of Culture and Tourism.

The category may be expanded in the future.

Hotels will first be asked to rectify the issue or face a fine of between 500 yuan (US$73) and 5,000 yuan if they continue to provide such items.

Restaurants and food delivery businesses will be banned from providing customers with four disposable items, including chopsticks and spoons, unless requested from today.

Catering service providers will first be asked to rectify the practice or face a fine of between 500 yuan and 5,000 yuan if they continue to provide such items.

A "no sorting, no transportation and no treatment" mechanism has been established to ensure the implementation of the regulations.

An information supervision and management platform covering the whole process of garbage sorting and transportation, transition and terminal treatment has been established in the city as well.

By June 25, 1,224 cases involving irregularities of garbage sorting had been handled by the city's urban management and law enforcement authorities, involving fines of more than 500,000 yuan.

"Education will come first and a fine will only be imposed when people refuse to correct or fail to rectify the problem within a certain period," said Peng Yanling, deputy director of the Shanghai Urban Management and Law Enforcement Bureau.