Some 170 officers were joined by others from related district departments such as the greenery and sanitation authority, market watchdog and culture and tourism administration. So far this year, the bureau has carried out 1,345 operations on household waste management, checking 2,568 organizations, educating 1,179 of them, urging rectification 826 times and dealing with 77 rule violations.

Minhang urban management and law enforcement officers issued a rectification notice to the market administrators and had them move the waste to the correct trash bin.

According to Gu Ronggen, an administrator with the Dazhenli Market, it was a delay in the collection of wet trash due to Monday morning's heavy rain that caused their six wet trash bins to remain uncleared, resulting in different trash being placed inside.

"All our six wet trash bins were overflowing and had no room for new trash, so we had no choice but to put some of the extra trash in other bins for the time being," Gu explained. "The wet trash truck usually arrives at 9am but today it didn't come." 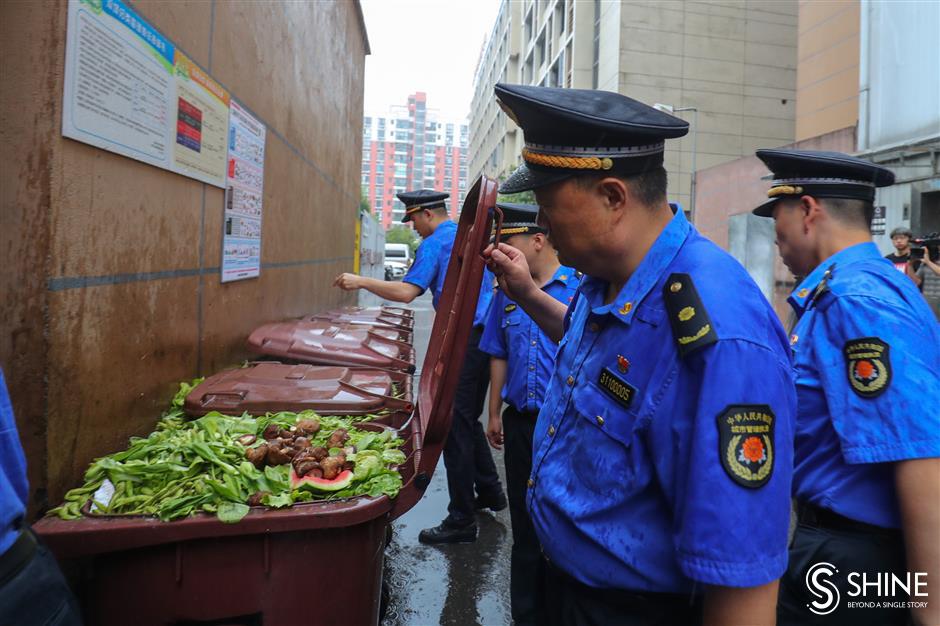 An urban management official checks a food waste bin at a wet market in Minhang District on Monday morning.

However, urban management and law enforcement officers didn't find such reasoning strong enough to account for their garbage sorting failure. They suggested that Gu and his colleagues perform timely communication with the organization that sends workers to collect the garbage.

The officers' second stop was a residential complex on Hongxiu Road, where all four kinds of waste were found in the correct bins.

Wang Anwu, with the community's property management company, told Shanghai Daily that they have two sites for their residents to dispose of their sorted garbage, and there are volunteers standing by to help them. Waste then goes through a second sorting to double check.

"Tomorrow we will have more checks of residential communities in Hongqiao Town with their neighborhood committees and property management companies on residents' dumping of household waste," said officer Qian Chunfeng.

"We will issue rectification notices to the property management companies if there are no volunteers guiding residents at dumping spots or if the four types of trash bins are set inappropriately. For individuals who don't sort their garbage, we will first talk to them with neighborhood committee members and later have community police officers talk to them. If they still refuse to do sorting, we will give them a fine ranging from 50 yuan (US$7.3) to 200 yuan." Gu Ronggen, an administrator with the Dazhenli Market, signs a rectification notice of garbage sorting on Monday morning.

At a cafe on the ground floor of a hotel on Hongmei Road, another rectification notice was issued after the its trash bins were found to have no marks for wet and dry waste.

The dumping spot of the hotel and some offices in the same building were seen to have correct garbage sorting but a poor environment, which triggered a third rectification notice. Some empty old trash bins used to contain all kinds of waste with no division marks were still at a corner. The person in charge of the dumping spot was educated by the officers and told to remove all those old bins.

In the hotel rooms, disposable toiletries such as toothbrushes, combs and soap can no longer be seen on the sink.

"We began informing our customers two months ago that we will not provide disposable toiletries anymore in room starting July," said Yan Jin with the hotel. "We posted notices and gradually removed these items from rooms. If the customers want something, they can call the reception desk and go downstairs to pick them up, still for free."