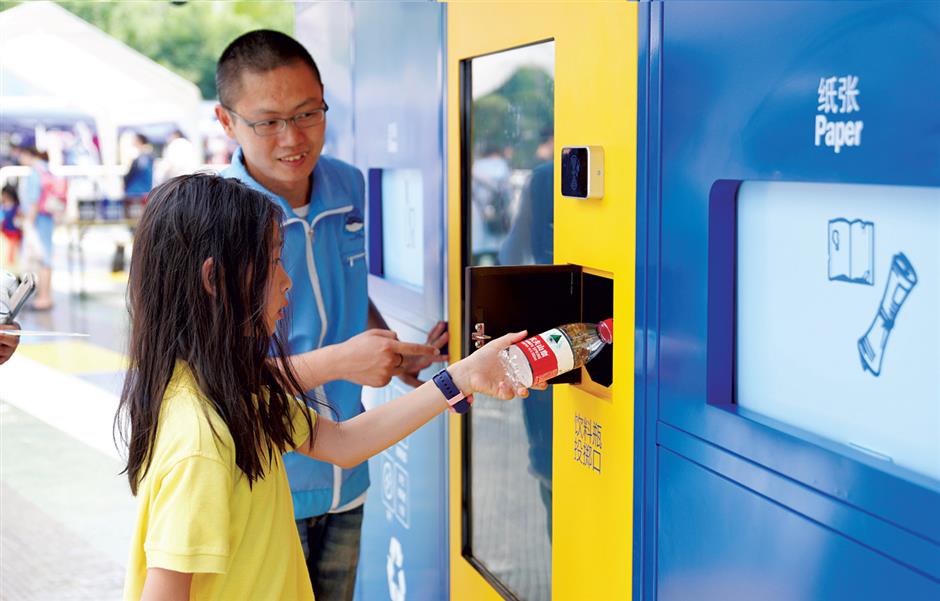 The northwest downtown district aims to take a lead among other localities to become a pioneer in garbage sorting. It will ensure the waste-classification practice is promoted across its communities, companies and public areas.

To achieve that goal, the district government has established a “new fashion” leaders’ group to promote garbage sorting and reduction.

While visiting a Shanghai community center in November 2018, President Xi Jinping commented that waste sorting is a “new fashion,” and that Shanghai should make sure garbage management is done well.

The infrastructure in Putuo has been improved to develop a system for garbage dumping, collection, transportation and disposal. The garbage houses in Putuo neighborhoods have been renovated, which will open at fixed hours for dumping.

The garbage trucks have been upgraded while transfer stations for recyclable waste have been newly built.

Four qualified third-party companies have been invited to take charge of the collection and transport of the wet garbage.

Putuo has made the fifth day of every month as a promotion day for garbage sorting. Volunteers will be visiting communities, campuses, hospitals, parks, government bodies, companies and local families to promote the eco-friendly habit.

Bespoke measures have been made to promote garbage sorting in different communities. Many Putuo subdistricts and towns have come up with innovative methods.

The Ganquan Road Subdistrict, for instance, which has been listed as one of the first demonstration subdistricts on waste sorting, has released 15 facility standards, collection procedures, supervision and promotion.

The Xinyang neighborhood of Taopu Town, where more than half of the apartments are rented, has organized six volunteer teams and released a residents’ convention to make sure waste is classified, while some kitchen waste has been developed into a fertilizer for gardens.

The Meisi neighborhood, in Changzheng Town, held public hearings biweekly to resolve difficulties for the residents. 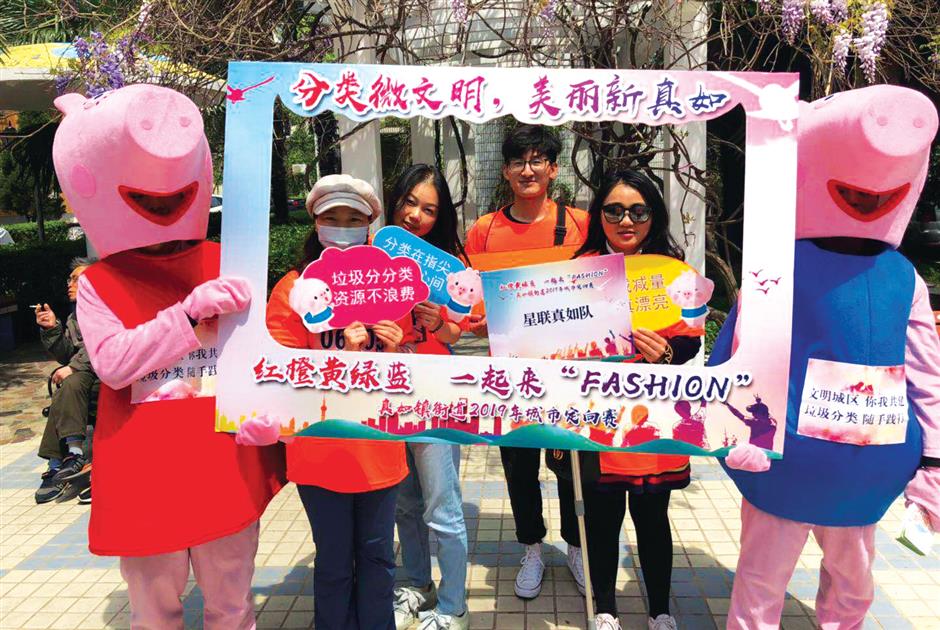 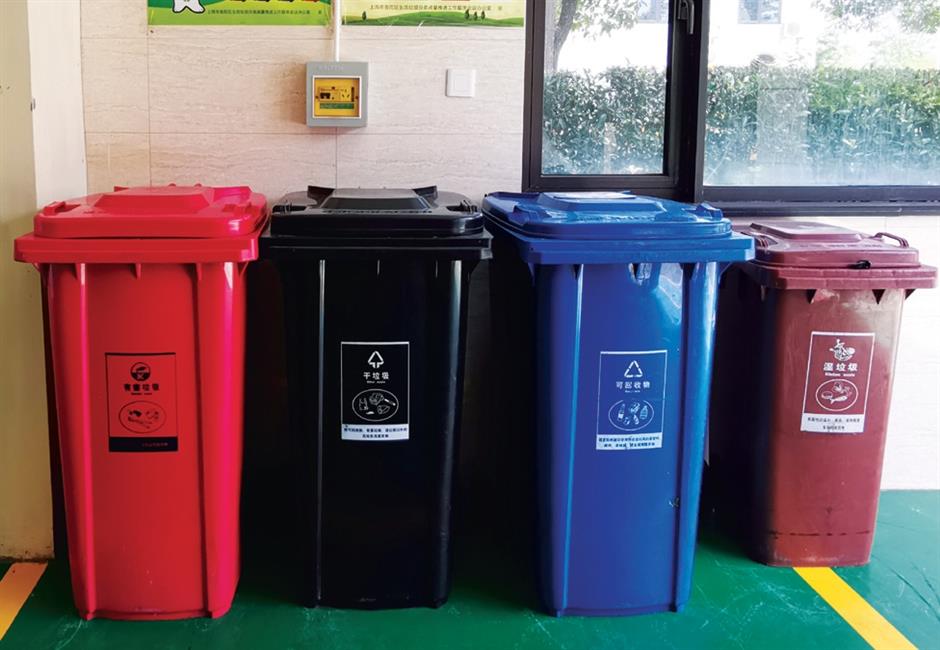 The Guannong No. 1 neighborhood, of Shiquan Subdistrict, appointed a Party secretary and other community officials as “garbage bin chiefs” to take responsibility for waste classification.

The Shiquan Subdistrict has also developed an innovative “mobile garbage house” to cater to the demands of some old residential neighborhoods where aged garbage houses can not be renovated.

Four garbage bins are placed in a mobile garbage house around 2 meters long and 70 centimeters wide, which saves space in the old communities while effectively promoting waste sorting.

To check the effect of these measures, Putuo officials have organized research teams to inspect the neighborhoods and garbage transport procedures.

In an innovative effort to ensure hygiene condition, the trucks transporting waste begin by taking away the garbage bins and replacing them with new empty ones.

The practice has been implemented in the Caoyang Community neighborhoods, China’s first worker’s community built in the 1950s.

Over 70 percent of the residents have removed package before dumping the household food waste, after the property management company offered discounts on fees for those who correctly sort garbage for 21 consecutive days.

For neighborhoods where large garbage trucks cannot gain access, cleaners are transporting wet garbage bins with tricycles to the trucks to make sure no waste or oil is spilt.

Putuo managed to ensure the smooth operation of dumping, collection, transport and disposal of waste by the end of June.

More than half of its 10 subdistricts and towns are targeted to become leaders in the city fight to clean up waste disposal. 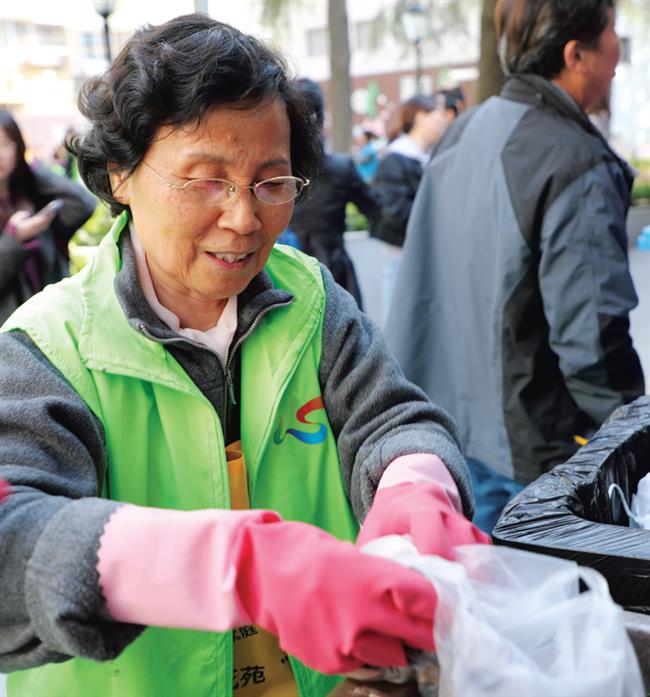