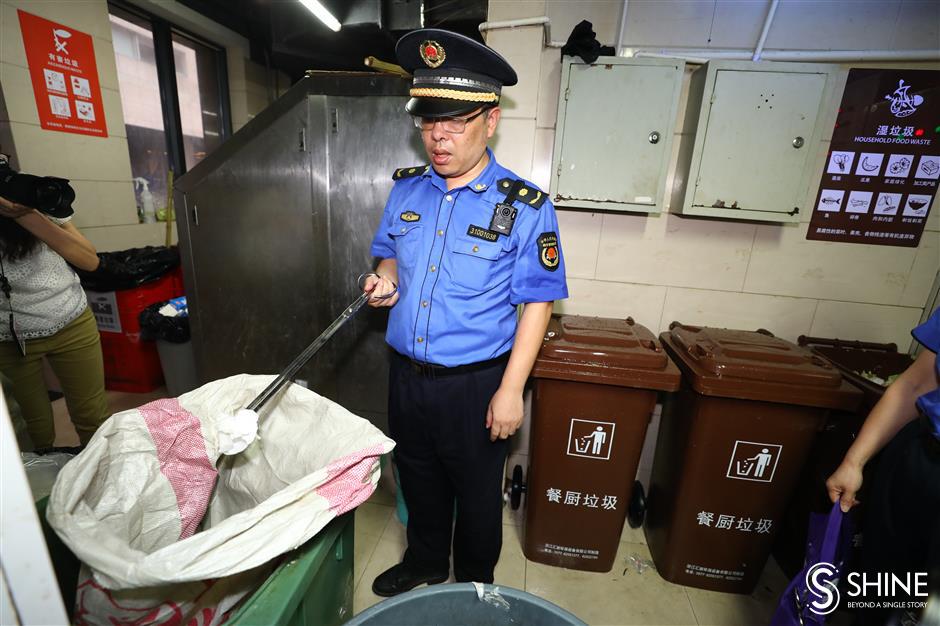 An official with the Shanghai general urban management and law enforcement team checks garbage bins at the Swissotel Grand Shanghai.

Among the 623 notices on irregularities in waste sorting, 117 were issued to residential complexes and 135 to companies. The remaining 324 were sent out to businesses like restaurants and shops and eight to hotels, according to the Shanghai Urban Management and Law Enforcement Bureau.

In addition, 39 were handed out during inspections of public areas, the bureau said.

In total, 4,216 places were inspected by 3,600 inspectors on Monday, and they educated or dissuaded people involved in 881 cases.

A total of 1,588 residential complexes were inspected, and the figure was 406 for enterprises. More than 1,800 businesses were checked and 21 hotels were inspected.

Another 348 public areas were visited by inspectors.

Violators have been ordered to rectify or warned about administrative punishment.

Twenty cases of irregularities are being investigated, among them, 17 involved failure to sort domestic wastes, and three for failing to set up bins for different types of trash, the bureau said.

The hotel had failed to classify the garbage bins, and napkins were found in the bin for recyclable trash. In addition, the bins had no covers, which was also against the new regulations, officials said.

The notice was issued around 9:50am.

The bureau has ordered the hotel to fix the irregularities immediately.

Officials said they would carry out unannounced inspections of the hotel, and fine them if the changes are not carried out.

Companies can be fined up to 5,000 yuan for failing to have the right trash bins in place and refusing to make improvements, and up to 50,000 yuan for failure to sort waste if they refuse to rectify their mistakes, the regulations state.

"Our inspections on Monday was to check whether enterprises put up four types of garbage bins and sorted trash correctly," said He Yujun, an inspector with the bureau.

"We will also conduct inspections on collection and transportation companies," he said.

"Law enforcement is not the purpose, it has more to do with educating and urging enterprises to rectify," he added.

Crystal Galleria, a shopping mall in Jing'an District, also received a rectification notice. Plastic water bottle, which should be dumped in recyclable bins, and fruit, which is wet garbage, were both found in dry garbage.

Tree branches, which should be wet trash, were mixed with dry garbage, along with construction waste, which does not fall into any domestic garbage category.

The shopping mall was ordered to fix the problem immediately.

Park Place, an office building that includes a hotel and shopping mall in Jing'an was also slapped with notice. The complex was found to have no garbage bins for recyclable and hazardous trash.

The property management staff of the complex said businesses were still getting used to the new regulations and they would act and sort it out.

People in Shanghai can be fined up to 200 yuan if they fail to sort their garbage properly. But they will be educated first, and only after that a fine issued.

The campaign will first target enterprises and then individuals, the bureau said.

The Shanghai Urban Management and Law Enforcement Bureau said they will carry out daily checks and continue to conduct promotion and education in areas with a high number of human traffic and high population density, such as office buildings, commercial areas, hospitals and hotels.

A "no sorting, no transportation and no treatment" mechanism has been established to ensure the implementation of the regulations.

An information supervision and management platform covering the whole process of garbage sorting and transportation, transition and terminal treatment has been established in the city as well.

The bureau said it will use video footage to collect evidence. Individuals found mixing wet trash with recyclable or dry trash will be fined 50 yuan to 100 yuan. For repeat offenders, violators will be fined between 100 yuan and 200 yuan.

First-time violators mixing hazardous waste with the other garbage will be fined 50 to 150 yuan if they refuse to rectify. The fine will rise to 200 yuan if they are spotted skirting requirements for the second or more times and refuse to make improvements.