A photo exhibition commemorating the 40th anniversary of the establishment of the China-US diplomatic relations opened on Wednesday at Shanghai Archives on the Bund. Many American guests who witnessed the development of the relations first-hand were invited to the opening ceremony, including US Consul General in Shanghai Sean Stein.

The “Trans-Pacific Exchange and Cooperation” exhibition showcases 350 pictures in five sections that encapsulate the highlights of bilateral relations in Shanghai, not only at government level, but also in arts, business, culture, education, religion, sports and people-to-people exchanges.

Running through August 15 in Shanghai, the show will also travel to sister city Houston on July 17 to be on display during the 4th US-China Sister Cities Conference and Sister Cities International’s 2019 Annual Conference.

“Shanghai is a city with great significance in the evolution of China-US ties. In 1972, the Shanghai Communique set the stage to restore the China-US relationship,” said Zhang Xiaosong, director of Shanghai's Foreign Affairs Office.

“Shanghai not only witnessed the normalization in early stages of China-US relations, but was also among the first cities to participate and benefit from China-US cooperation and exchanges. Over the past 40 years, Shanghai has seen closer exchanges with the US, registered fruitful results and promoted China-US relations as a whole.” 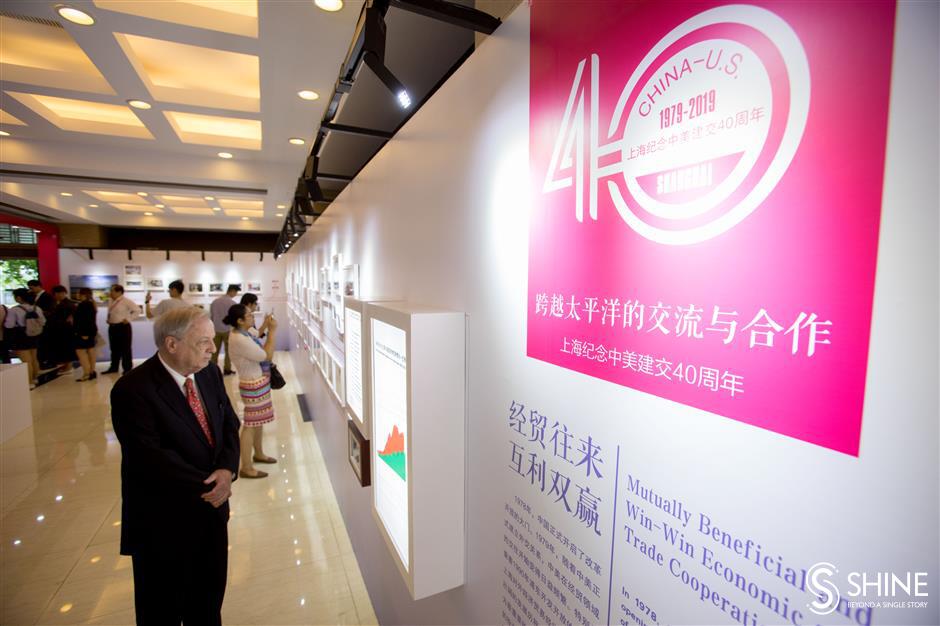 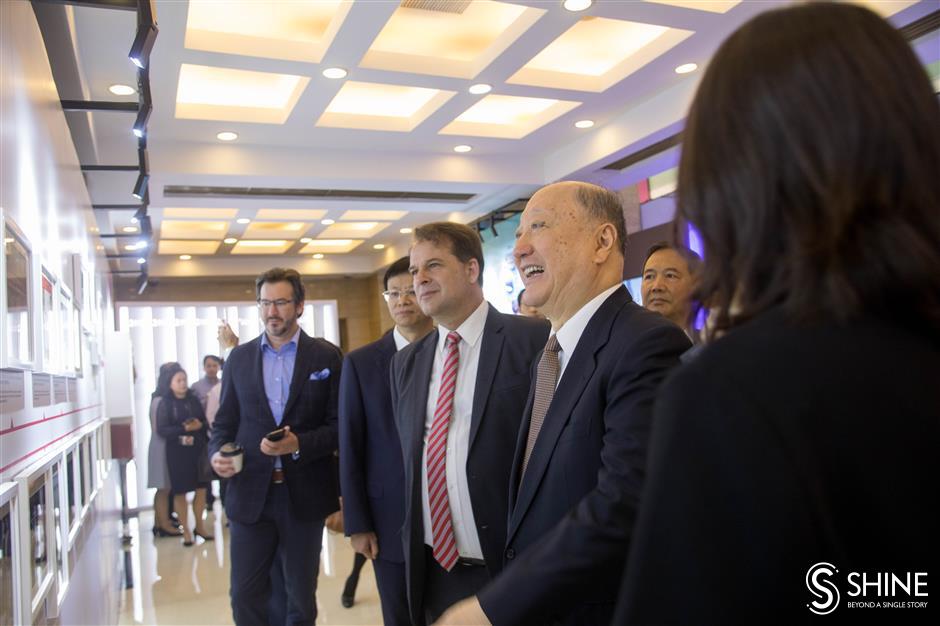 Visitors browse exhibits at the Shanghai Archives exhibition on the Bund.

In addition to pictures of state visits and exchanges between leaders that many will remember from the news, the exhibition also includes intriguing moments that surprised many visitors. For example, an English version of a classic Peking Opera, performed by two University of Hawaii graduates, which premiered in Shanghai in 1991. Zhuang Zedong and Tim Boggan, the two protagonists in the famous “ping pong diplomacy,” reunited in Shanghai in 2006 and showed the newspapers that reported their first encounter in 1971.

“This fantastic exhibition shows cooperation between the United States and China. We have a long history together, and it’s wonderful to see these sorts of exhibitions to show everybody throughout the world that we are a very global society and that there is a wonderful friendship,” Michael Rosenthal, an American businessman who has spent the past 14 and half years in Shanghai, told Shanghai Daily after visiting the exhibition.

“Trade between the two countries and the business that we do are so critical. It’s the glue that keeps us together. I’m sure we are going to have a great success in the future,” he added.

The Shanghai Archives exhibition also includes a video showing a series of interviews with 20 Chinese and 20 American experts commenting on the past, present and future of bilateral relations. The “40 People on 40 Years” series was conducted by the Center for American Studies of Fudan University, Shanghai Institute of American Studies and The Paper.

The interviewees include academics and those who have played major roles in the relationship, such as former US President Jimmy Carter who welcomed Deng Xiaoping on his official visit to America, former Vice Premier of China Long Yongtu who was chief negotiator for China to join the WTO and current US Ambassador to China Terry Branstad, who was among the first to sign agreements with Chinese provinces and visited China during his first term as governor of Iowa. 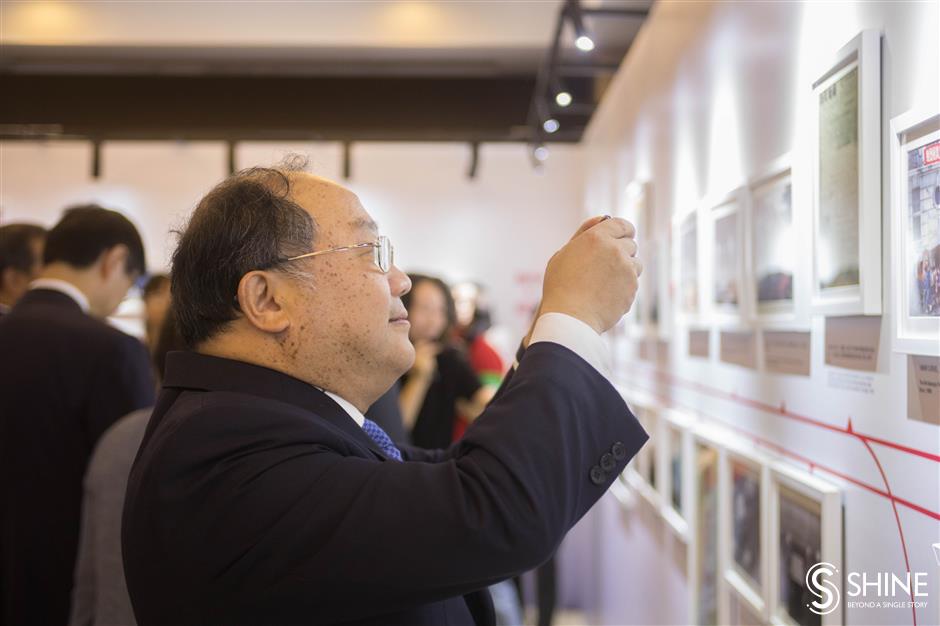 A visitor takes photos of exhibits at the exhibition in Shanghai Archives. 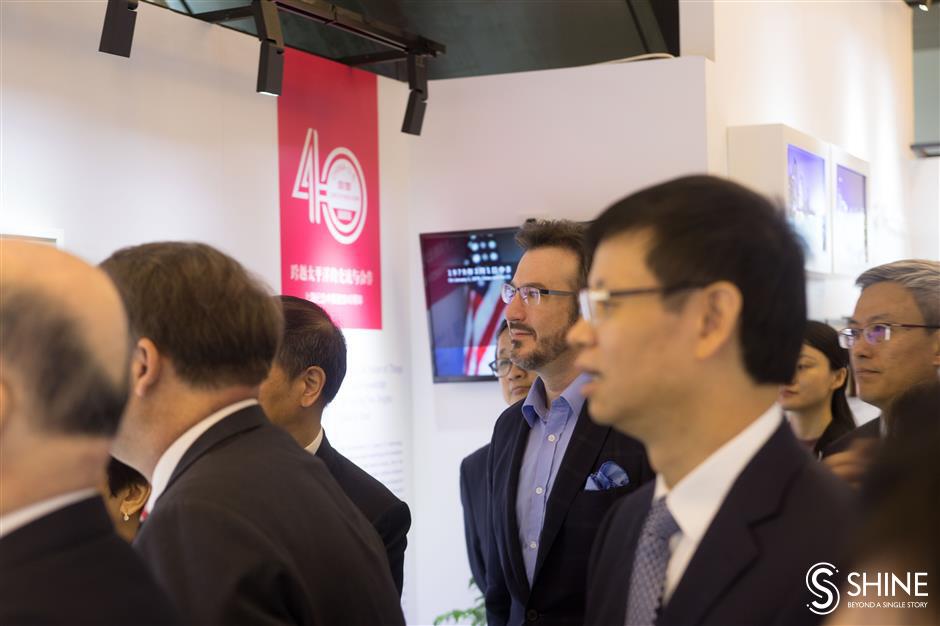