The first of Shanghai Daily’s 20th anniversary events “20 Years On: Responsibility & Innovation” was held in the plaza of the Shanghai Film Museum in Xuhui District on Saturday.

This first Sustainable Community Market was co-organized by the newspaper and Xujiahui Subdistrict to promote the latest environmental protection ideas.

The “market series” will also be held in the Jing’an Temple Subdistrict in Jing’an District, Jiuting Town in Songjiang and Lujiazui Subdistrict in the Pudong New Area.

Authorities such as the city’s information office, spiritual civilization office and ecology and environment bureau have provided guidance for these activities.

They aim to promote ideas on sustainable life among the public and encourage more people to participate in garbage sorting and focus on resource recycling.

“We will continue pushing forward water treatment, as well as taking measures to further tackle air pollution, especially on PM2.5 particles,” said Shi Min, an official with the Shanghai Ecology and Environment Bureau.

“We will combine our work on solid waste treatment with the city's garbage-sorting regulations and we will also have projects for industrial waste and dangerous waste.”

She said the bureau is working on building Shanghai into an eco-friendly city by 2030 and making the whole Yangtze River Delta an area of green ecosystem. 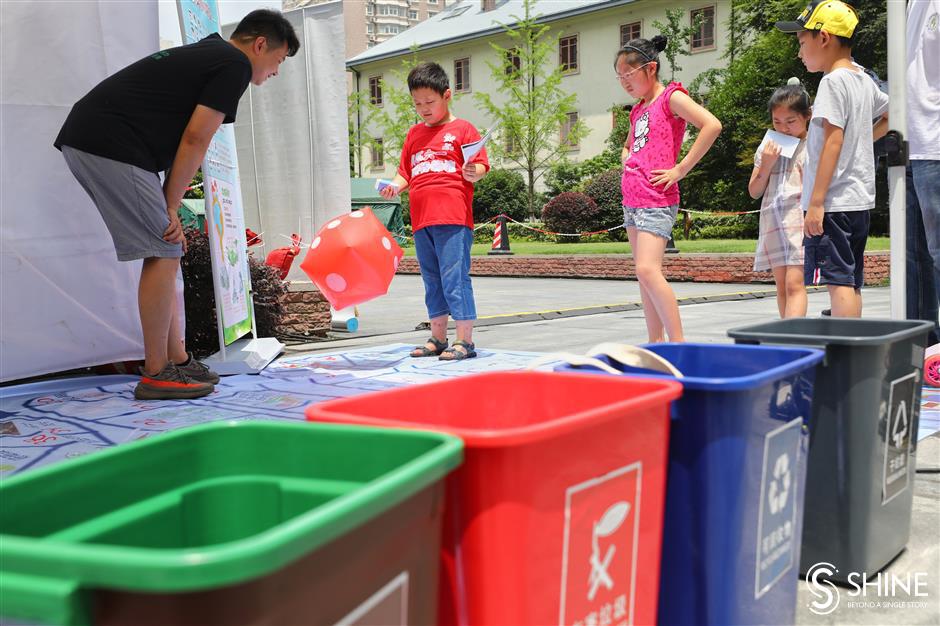 Children play a garbage-sorting “board game” provided by Green Fingermark.

Zhu Jiajian, chief of Shanghai Daily, said it is hoped the yearlong series of events can integrate the resources of enterprises and communities to build a platform for serving readers.

“Shanghai Daily hopes to be a bridge between companies and individuals and between residents and our city," Zhu said.

At the site, Coca-Cola China displayed a model of a smart vending machine “Future in Left and Right.” It allows customers to receive a drink container from a dispenser on the left and deposit the empty container in a receptacle the right.

3M China presented a video of their “five-bottle action” which outlines five things plastic bottles can be recycled into.

A set of car-racing toys powered by energy produced by pedaling two bikes was designed by iDEALShanghai under Shanghai Daily.

At the booths of Bright Dairy and food and German specialty chemicals producer Evonik, quizzes about garbage sorting were given.

The Green Fingermark, a non-profit social organization for environmental protection, decorated the ground of its booth with a trash-sorting “board game.”

Each player was given a toy dice to roll and had to determine what type of garbage the dice had landed on.

Arthur Fong, vice president of business development and marketing-sales of 3M China, said the company had a great passion for participating in environmental protection events.

“This sustainable community market features garbage sorting, which is a hot issue now after Shanghai’s newly enforced trash-sorting regulations took effect in July. So we feel that we should be here,” said Fong.

“At the market, we saw many participants discussing with each other topics on environmental protection and joining the quizzes, which can help the public know more about garbage sorting and an eco-friendly lifestyle.”

Fong told Shanghai Daily that the company has released thousands of environmental protection and energy-saving products as well as solutions.

It has also organized some environmental protection themed events, such as a jogging event which required participants to pick up waste along the routes and sort them.

As an advocate of environmental protection, 3M has tried to reduce pollution produced during manufacturing via its “Pollution Prevention Pays” project.

Recently, it promises that it will have all its factories and offices use renewable energy for power. It has set a medium-term goal,  as at least half of the company’s power will come from renewable energy in 2025. 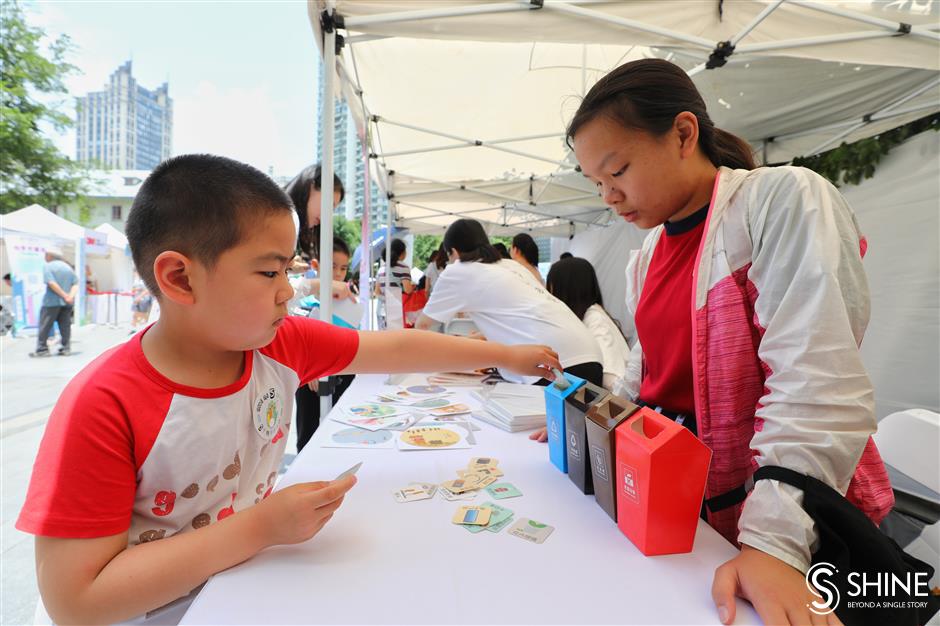 A boy puts cards with pictures of different types of waste into appropriate bins.

Kang Wei, deputy director of Xujiahui Subdistrict, shared the progress it has made on garbage sorting.

"A good number of companies and shopping malls are also located here. Such a complex population made it more difficult for garbage sorting.

"And as one of the prime commercial areas, Xujiahui often gets extra attention from the public. We made different plans for different kinds of complexes as some of them are quite old.

"For many office workers who find it hard to follow the timetable to dump garbage, we made it flexible."

According to resident Liu Hui,  the greatest change is that there is a volunteer “guarding” the dumping spot in the mornings and evenings.

“When we go downstairs to dump the waste, an auntie will teach us how to sort them, which is good for the cultivation of residents' habits,” Liu said.

“But it’s still difficult for some of us to change, especially the elderly people, so it will take some time.

"It's more easier for the youth to accept it and my little son learns it quickly from school.”

The market also attracted many passersbys.

A father who accompanied his 2-year-old daughter to play games told Shanghai Daily that he felt it's a nice way for promoting the ideas of garbage sorting and environmental protection.

“We parents should set example and teach children how to live an eco-friendly life," he said. 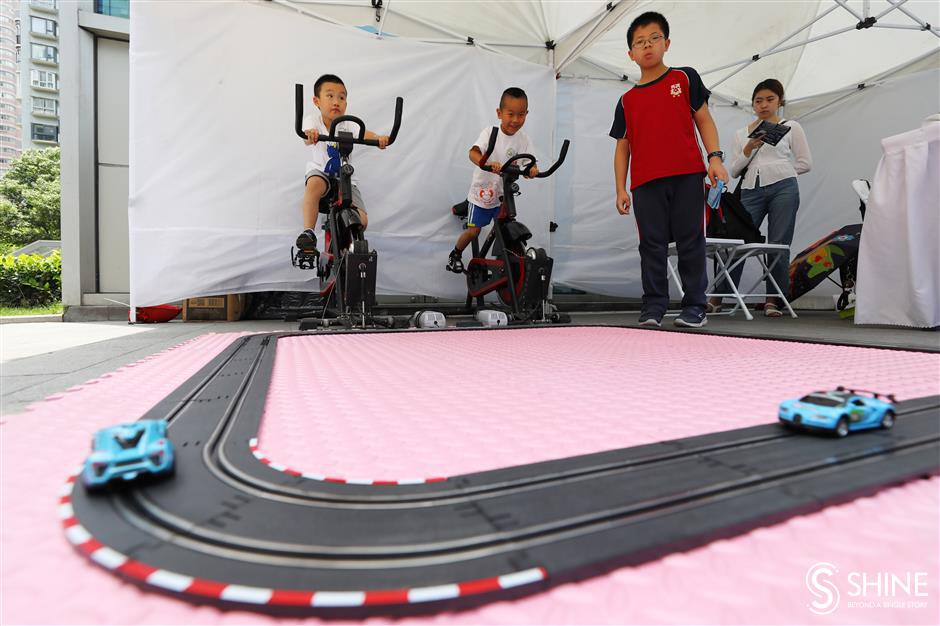 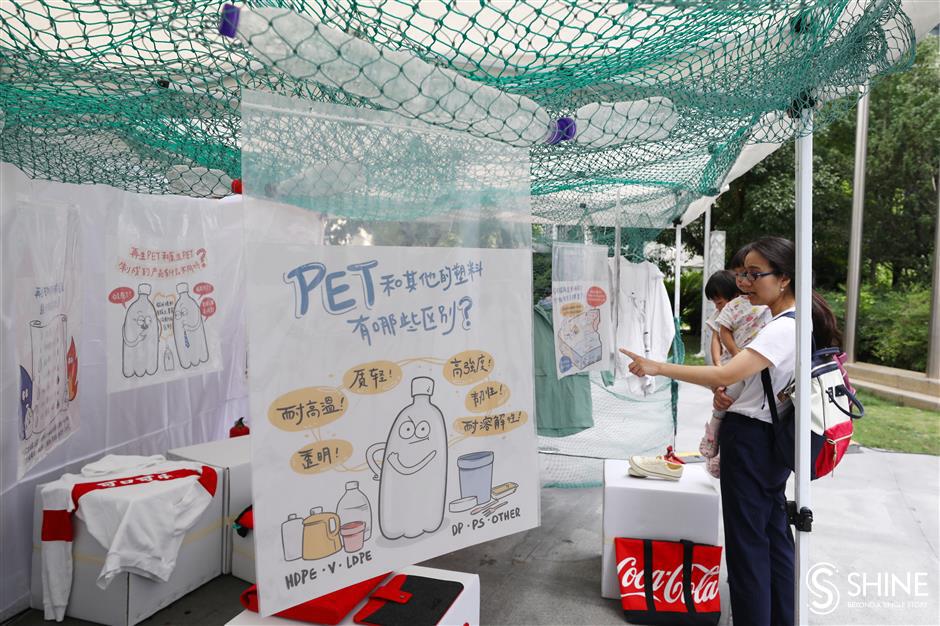 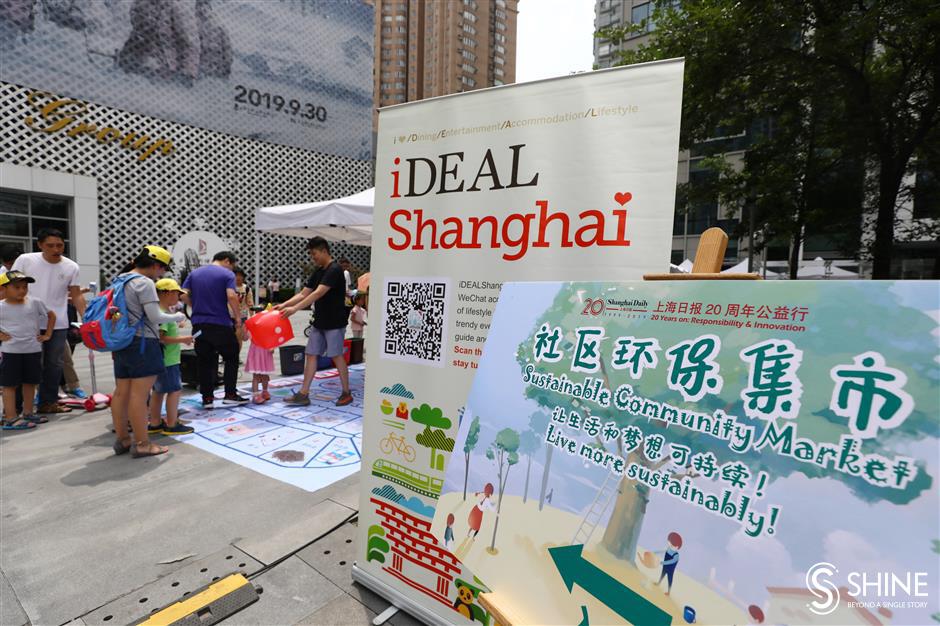