Fines for failure to sort trash 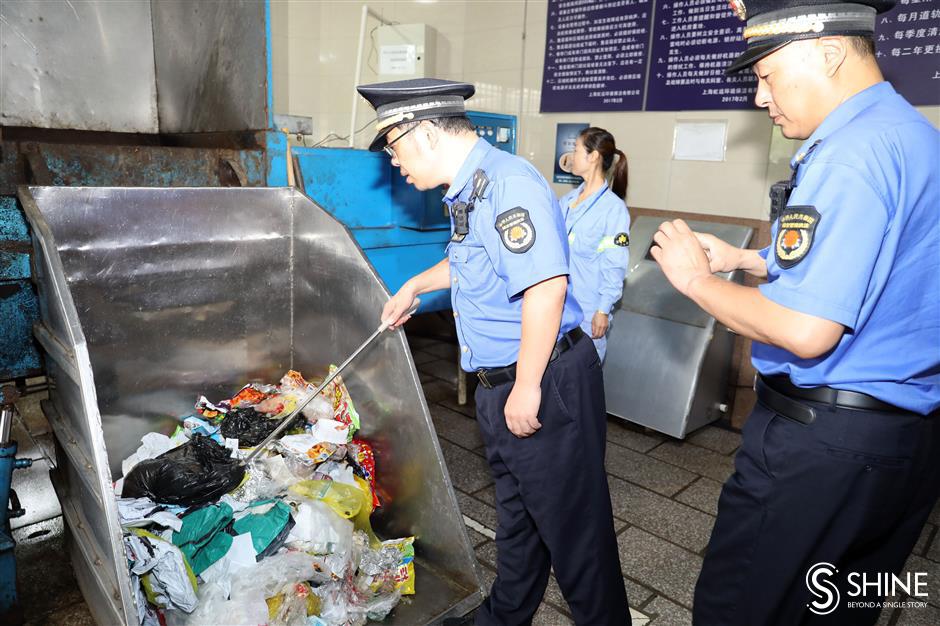 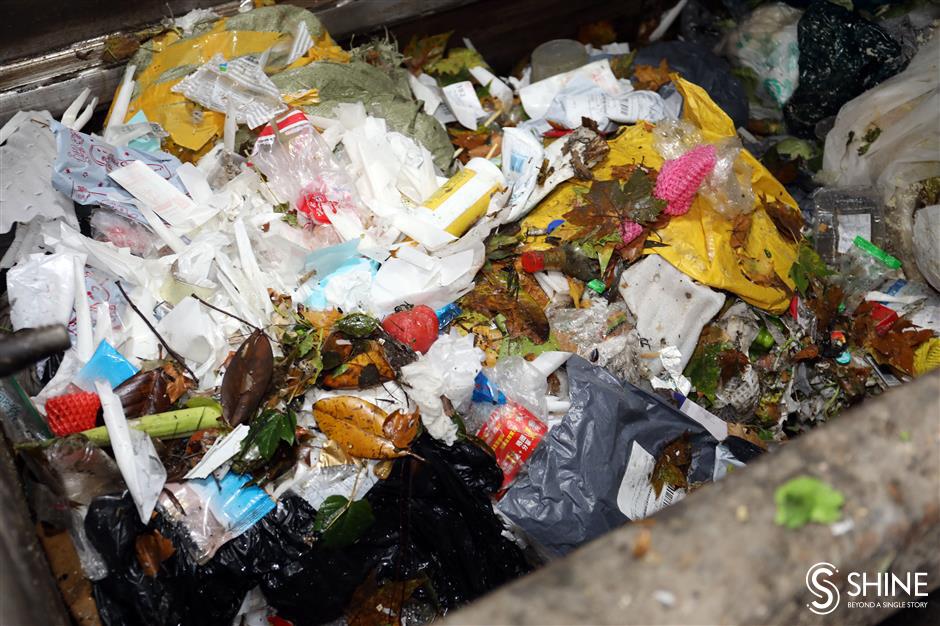 Mixed trash is seen inside a compression machine for dry garbage on Jingyu Road S. in Yangpu District.

Among them, 62.1 percent were related to failure to install garbage-sorting containers, and 35.8 percent were for failure to sort and dump trash correctly, according to the Shanghai Urban Management and Law Enforcement Bureau.

The rest were for irregularities in collecting and transporting domestic garbage.

In 15 cases, individuals were fined.

A total of 9,600 inspections of garbage sorting have been conducted as of Saturday since July 1, covering more than 12,800 units including residential complexes, hotels, shopping malls, hospitals and industrial parks and more than 8,200 individuals, according to the bureau.

In total, people found with garbage-sorting irregularities in 6,704 cases, involving both companies and individuals, were educated and persuaded, according to the bureau.

They will face further administrative punishment for failure to fix the problems.

On Sunday, the bureau conducted a swoop inspection of domestic garbage collection and transportation companies.

The Shanghai Yangpu Environmental Development Co Ltd was issued a rectification notice for mixed collection and transportation of domestic garbage. 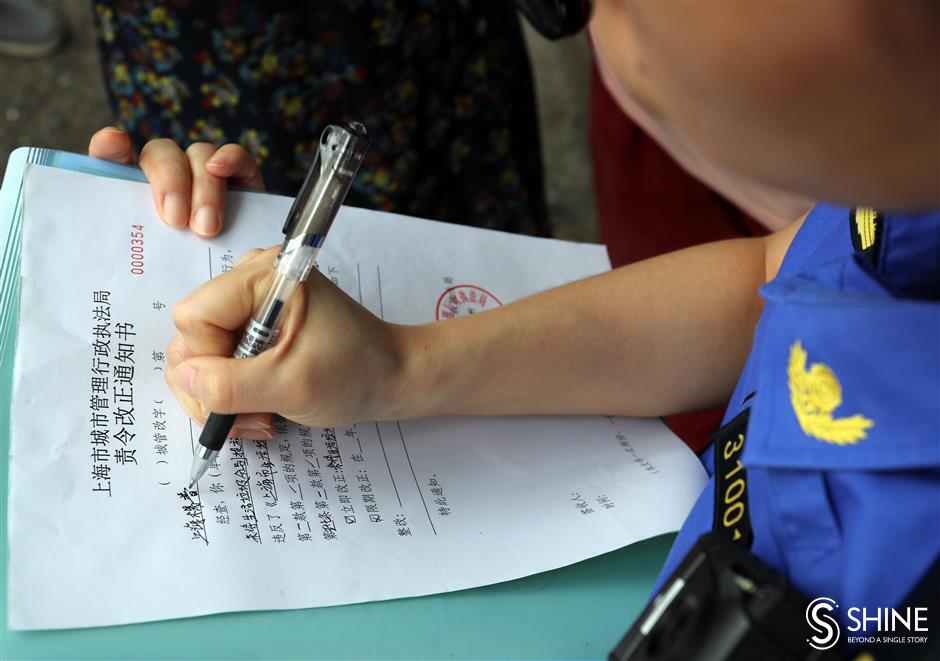 An official issues a rectification notice for a garbage compression station on Jingyu Road S. in Yangpu District.

At a bin for wet trash, corn husks and polyfoam were found inside, and vegetable, tree leaves and food leftovers were spotted inside a compression machine for dry garbage.

A worker at the station said he had received training but there were too many types of garbage, and he was not aware of each type.

The station collects domestic waste from nearby businesses and public areas, and sometimes the trash was not correctly sorted, the worker said.

The company was ordered to rectify within three days.

The Jingyu Wet Market opposite the station in Yangpu District was also issued with a rectification notice. Its bins for wet trash were full of plastic bags.

The wet market operator was issued a rectification notice and ordered to dump domestic garbage into proper containers.

A domestic garbage compression station on Hengshui Road in Hongkou District was found to have a good performance during Sunday's inspection as wet and dry trash was transported and handled separately.

"Garbage sorting has improved significantly this week since the regulations came into effect," said Lu Yong, a worker responsible for garbage transportation of the station. He collects dry trash from about 10 residential complexes twice daily.

"In the past, rice and kitchen wastes were often seen in dry garbage bins, but now, they are rarely spotted in these bins," he said. 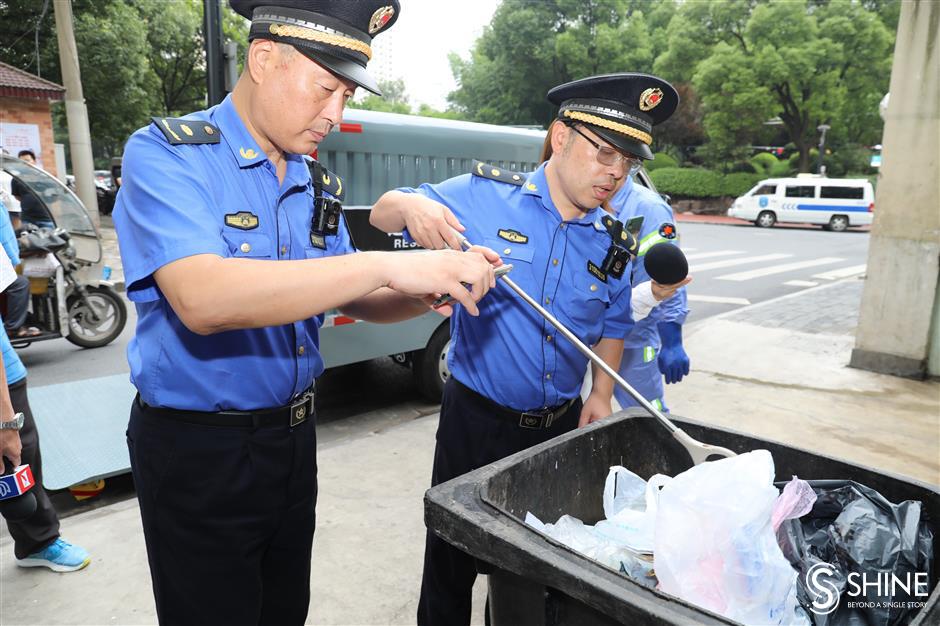 In addition, the amount of dry trash has also reduced by more than 10 barrels after the regulations went into effect from the previous 160 barrels daily, he said.

A total of 138 inspections were conducted citywide on domestic garbage collection and transportation companies between Monday and Saturday. Four companies are being investigated for mixed transportation, garbage scattering and leakage and signage problem, according to the bureau.

"Supervision and management over the whole process of domestic garbage sorting will be beefed up in the next phase, covering collection, transportation and treatment," said He Yujun, an inspector with the bureau.

Inspection frequency will be increased for shopping malls, enterprises and residential complexes where problems are found.

In August, checks on the treatment of domestic garbage will be enhanced, targeting 10 big garbage transit companies and 10 treatment enterprises in the city to crack down on mixed compression and treatment of already sorted garbage.

People can be fined up to 200 yuan (US$29) from Monday if they fail to sort their garbage properly and continue to do so.

Individuals who refuse to sort garbage can be listed on the city’s public credibility platform in serious cases.

Enterprises can be fined up to 5,000 yuan for failing to have the right trash bins in place and refusing to make improvements, and up to 50,000 yuan for failure to sort waste if they refuse to rectify their mistakes.

In serious cases, they will have domestic garbage operation service licences revoked.