The market watchdog in Chongming District is investigating food safety at a training center following a claim that it was serving students moldy buns.

A Weibo post complained about a “serious” food safety problem at Shanghai Qianwei Science and Education Training Center when Aurora College freshmen were there for military training.

Pictures along with the post showed sausages piled in a sink and black spots on buns, which were claimed to be mildew. Comments on the post said to be from Aurora College students said sanitary conditions were “very poor.”

After receiving a report on July 11, Chongming’s market supervision and management bureau launched an investigation along with the food and drug administration and the community health service center in Shuxin Town and dispatched officers to the site.

Officers took 12 samples of food from the center for testing at the district’s disease control and prevention center. Tests for the vibrio parahaemolyticus bacteria are ongoing while other tests all showed the samples to be safe.

The investigation found that 1,435 students and 18 teachers from Aurora College had taken 25 meals at the center between July 5 and 13. The center is privately run and has a food business license. All 16 workers at its canteen have health certificates.

With regard to the sausages, the investigation found that canteen hadn't supplied any sausages during the training period and the center’s purchase and sales records had no mention of any sausage products.

The buns, the investigation found, were made by canteen staff every day with standard facilities and the origins of ingredients had been tracked. Checks on bun samples at the scene didn’t find any evidence of mold.

Officers found the workers all dressed in uniforms with disinfectant in their changing room and ultraviolet heaters at the servery.

However, the center was punished for using the same container to carry raw and cooked material and told to rectify the problem.

College faculty and drillmasters said there had been no reports of stomach problems, a situation backed up by medical records.

Aurora College said it had reported the false online statements about the food to Baoshan police for them to investigate.

The market watchdog said it is to enhance supervision of canteens in training centers and summer schools to ensure food safety. There will be strict management of social catering companies as part of the bureau’s summer food-poisoning prevention and control work. 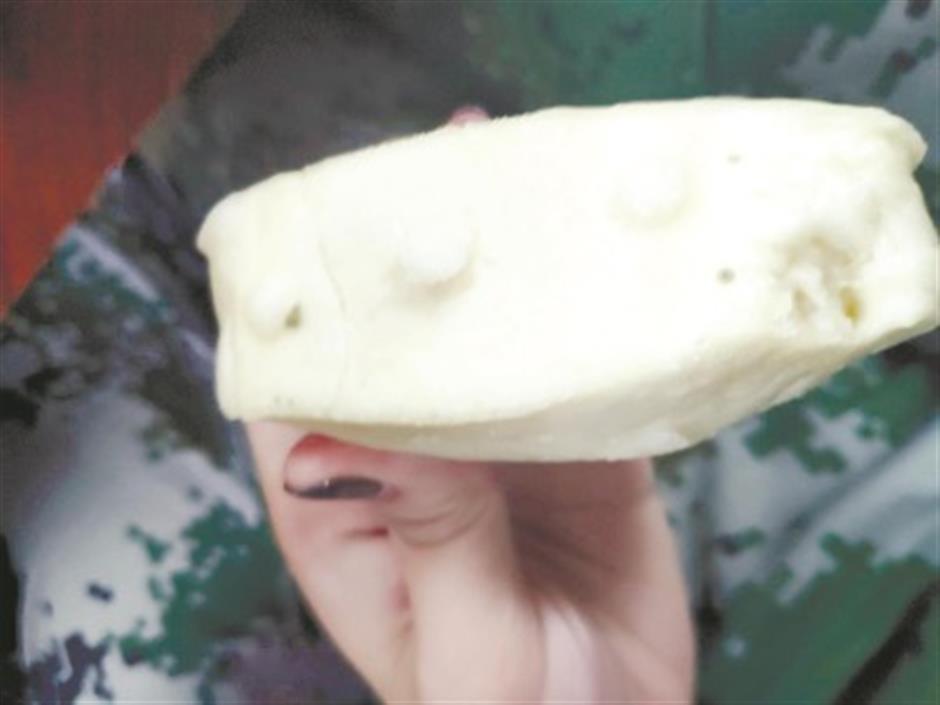 The picture of a “moldy bun” posted online