Women on deck in the maritime industry. Are you on board with that? 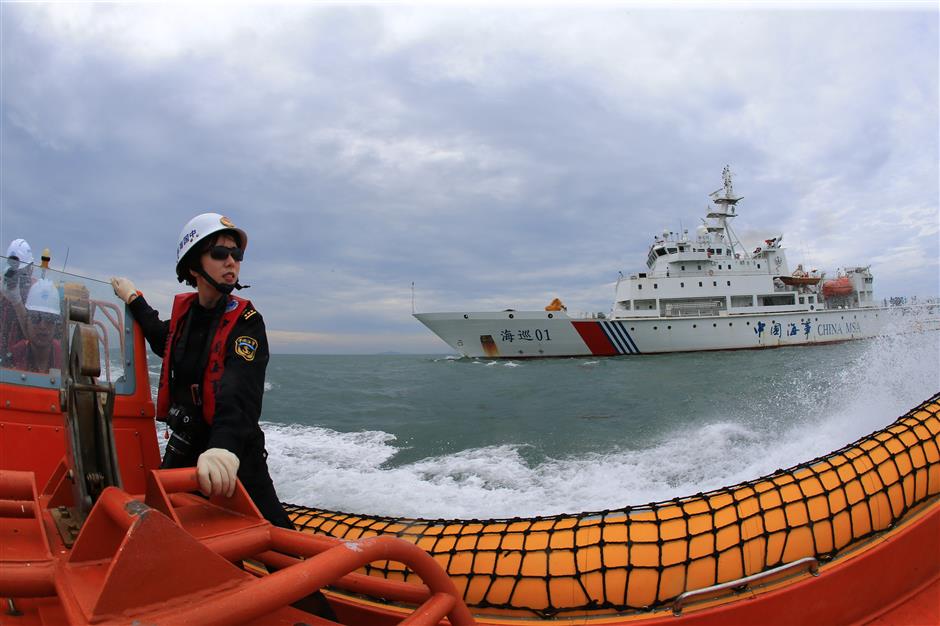 Zhan Chunpei on her way to rescue on a lifeboat

Oceangoing navigation has a masculine history, but now it’s man overboard amid an increasing focus on gender equality on the high seas.

The International Maritime Organization’s annual “Day of the Seafarer,” which falls on July 25, is seeking to break down bias and promote the role of women in shipping. Its slogan is “#IAmOnBoard.”

"To everyone in shipping: you are missing out on a huge talent pool if you don't recognize and empower women in the workplace,” said Kitack Lim, secretary-general of the organization. “I'm on board with gender equality at sea. Are you?"

Down on the docks of Shanghai, the message resonates with Zhan Chunpei. At just 28, she is the junior chief officer of patrol vessel Haixun 01, the largest of its kind in China. She is also the first woman maritime officer in China who is qualified for pilot navigation on the high seas around the world.

On July 11, Zhan served as a tour guide for the more than 2,000 local residents who came to visit Haixun 01 on China Maritime Day. Afterward, she sat down with Shanghai Daily for a short interview. 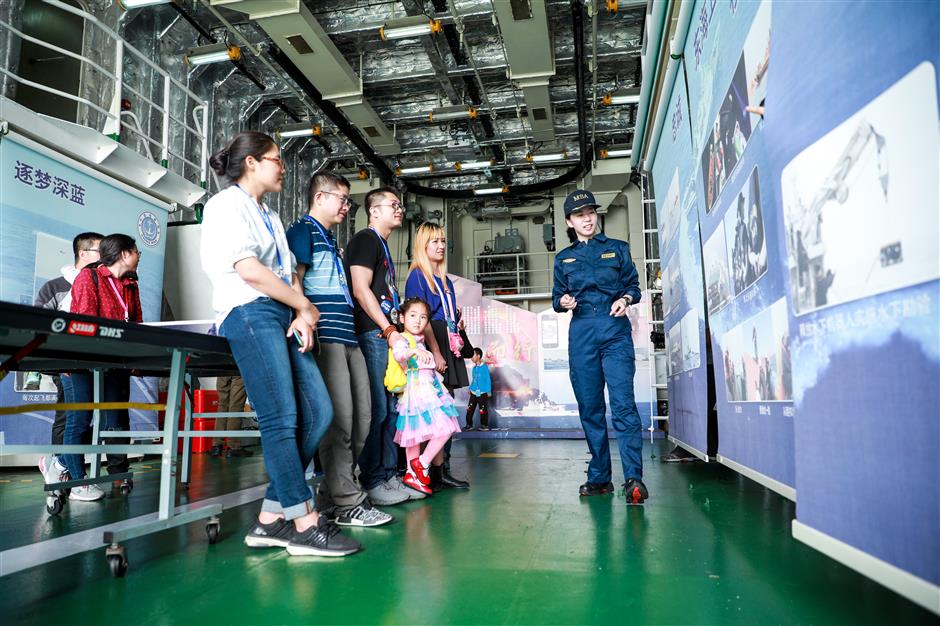 Zhan Chunpei guides a tour on Haixun 01 for residents visiting it on the maritime day of China.

Zhan has braved storms and sometimes treacherous waves for more than five years. She participated the search for Malaysia Airlines flight MH370 in 2014, and assisted rescue work for the Panama-registered oil tanker Sanchi after it collided with a freighter off China’s east coast in 2018.

Every year, Zhan spends more than 200 days on the sea. She has navigated the equivalent of circumventing the globe five times.

Zhan is self-effacing about her pioneering maritime role in China. She told Shanghai Daily that she still has a lot to learn and attributed her accomplishments to teamwork with other crew.

Ever since childhood, Zhan said she wanted to wear uniform to serve the country. She variously wanted to become a policewoman or serve in the army.

She eventually signed up for a career in the deep blue by enrolling in Shanghai Maritime University. In the spring of 2012, Zhan had her first chance on the high seas when she accompanied a cargo ship to South Korea. She stayed on board for three weeks.

“It was called cognitive practice,” Zhan said. “I was on board the first time to understand how life on the high seas can be.”

First, she conquered seasickness. Then she girded herself to adapt to the often hostile environment. She carefully observed how the experienced deckhands operated equipment, went to the gym regularly and read many books about navigation. By the end of that year, Zhan passed the exam and obtained a certificate of competency for seafarers.

Eight vessels and five helicopters were dispatched to the south Indian Ocean. Haixun 01 coordinated all their movements.

During the 216 days of search, Haixun 01 came back to Shanghai once for supplements. The crew was tired and distressed, so the administration sought some replacements.

It was Zhan’s big chance and she jumped at it.

“It was bizarre for a woman to be a deck department member, and no one knew if I could pull it off,” said Zhan. “I didn’t even have much faith in myself. All I knew was that I had to do my best.”

She was junior third officer, and apart from her shift beside the helmsman, she was also responsible for the maintenance of the firefighting apparatus on Haixun 01. All eyes were on her.

Haixun 01 Captain Jiang Long admitted he had concerns at the time.

“Many people who had been on the high seas for ages had doubts because they thought Zhan was weak and inexperienced,” he said. “There’s an old seafaring superstition that women on board bring bad luck. Nonsense!”

The search for the missing jetliner was long and fruitless.

“Every day I woke up with new hope; every night I went to sleep with frustration,” Zhan said.

By the time Haixun 01 was called off the search, Zhan had been on board for two months without a single mistake. On the ship’s trip back to home port, it encountered super typhoon Vongfong. The vessel shook like a leaf, she recalled.

On November 28, 2015, a fishing boat was toppled by a storm some 220 kilometers northeast of the Yangtze River Estuary. Haixun 01 rushed to the scene.

“The boat was turned over on the sea, and the first round of the search found no signs of life,” Zhan said. “But then one of the bosun insisted on another round of searching because there was still air in the cabin and someone may be alive.”

A lone survivor was found in the second search. Nine other fishermen perished.

“Life on the seas can be tenuous,” said Zhan. “You never know what’s ahead of you.”

At 9:45pm on January 6 last year, Zhan was working out in the gym as usual when she received an urgent order to set sail.

About two hours earlier, the oil tanker Sanchi and a bulk freighter collided off the coast in the East China Sea. The Sanchi was on fire.

Haixun 01 set off at 11:15pm, Zhan didn’t even have time to pack a bag. She was the second officer on the ship.

“We were only informed that two ships had collided,” she told Shanghai Daily. “When we arrived, I found myself looking at hell.”

For six days, Haixun 01 could not approach the burning tanker. Zhan watched and waited, knowing that it carried a crew of 32.

Her job was to coordinate the rescue ships and help the captain with navigation.

On January 13, four rescuers risked their lives to get on board the tanker. They initially found two bodies and the tanker’s black box. They couldn’t get inside the living area of the ship, where the temperature was 89 degrees Celsius.

“They found bodies on the deck of the lifeboat,” said Zhan. “They were so close.”

“You have to say it out loud: Your gender should not be a stain but a strength,” she said. “And you must dare to try and challenge yourself.” 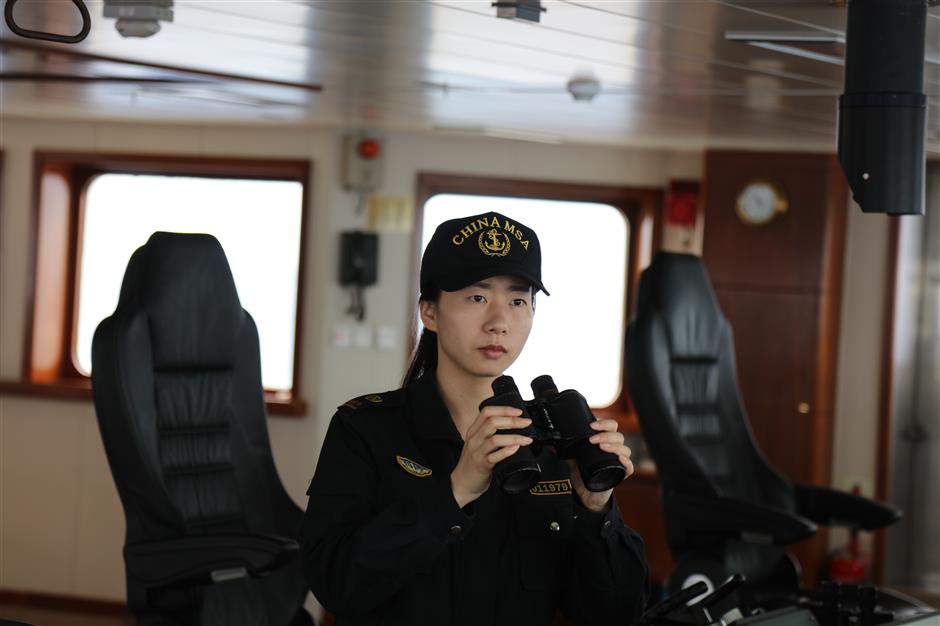 Zhan Chunpei is the first woman maritime officer in China who is qualified for pilot navigation on the high seas around the world.