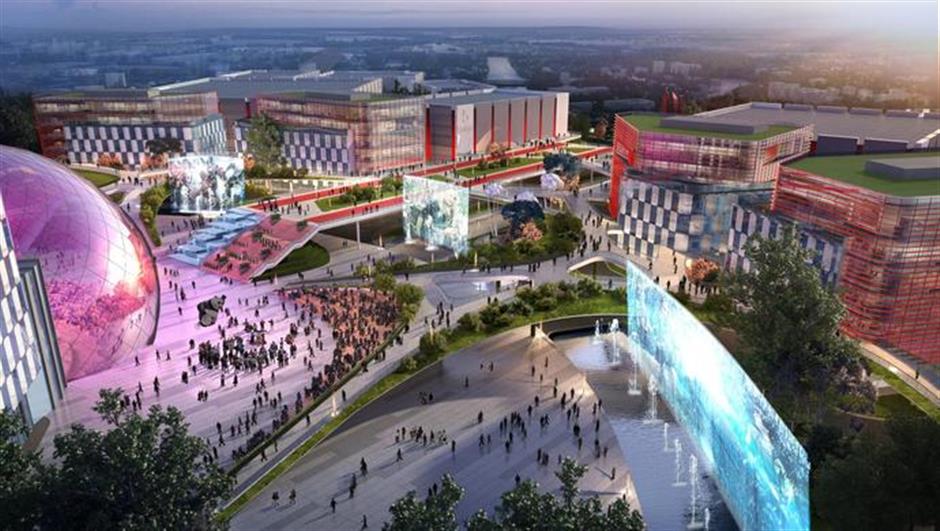 A rendering picture of Songjiang High-tech Film and Televsion City

Rich in natural and cultural resources, Songjiang is well-suited to develop the film industry.

Its Shanghai Film Park built in the mid 1990s in Chedun Town has attracted a constant stream of film crews to the simulated shikumen (stone-gate buildings) lanes, villas and Paramount Hall, and serves as a location for more than 70 movies and TV dramas a year. 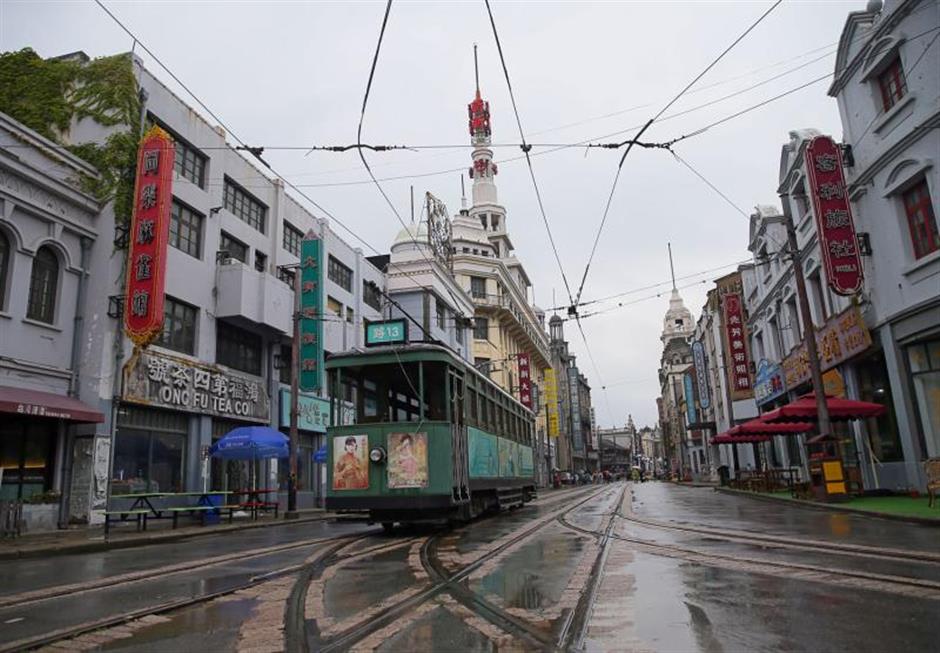 “We don’t compete by relying on our land or realty. We are depending on film post-production to trigger a clustering of all the elements of the industry chain,” said Xu Jiesheng, Party secretary of Songjiang District Culture and Tourism Bureau. “High-tech film studios and digital post-production are aspects in which the Chinese film industry lags behind, but they will be strong points which Songjiang as Shanghai’s sci-tech film capital will be proud of.”

The first phase of four film studios at the Haopu Film Base in Chedun Town will be in use by the end of this year. Each studio will be equipped with a lighting system enabling color temperature to shift between high and low in seconds, a technology that alone can save film crews large amounts of time and money.

The latest technologies are also used at the Tuko Underwater Film Base. Being the first all-steel underwater shooting studio in the country and Shanghai’s largest underwater film base, it adopts a circulation system to purify water, as well as a temperature adjustment system. Photographers can film through a window with a lifting platform adjusting height and angle. 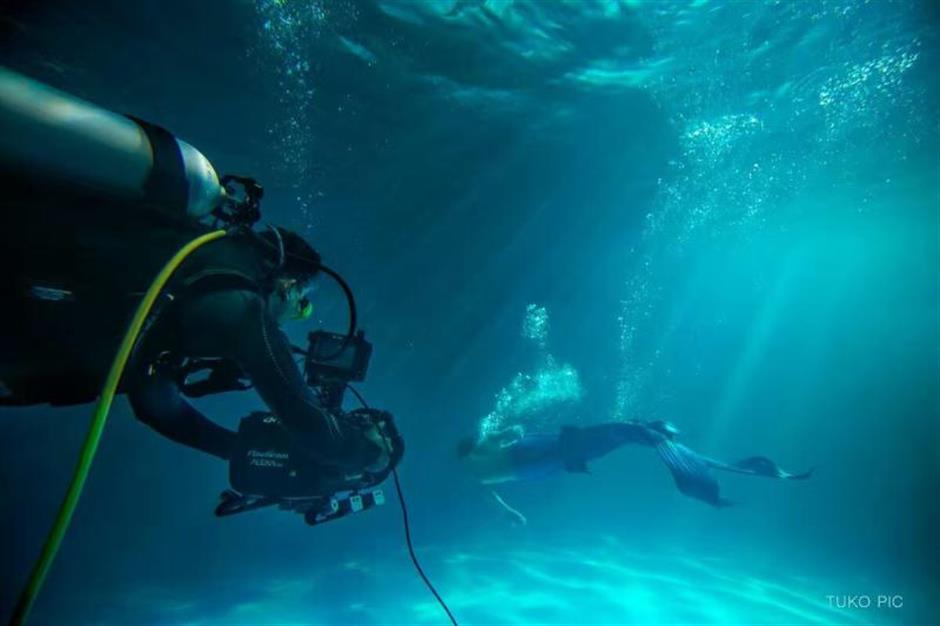 The Tuko Underwater Film Base in Songjiang District

“Our Shanghai Film Park featuring old Shanghai streets and buildings is faced with supply capacity shortage. But the vision to build Songjiang into Shanghai’s sci-tech film capital provides the film park with an opportunity. It will build itself into an old Shanghai street shooting locale, a new sci-tech film production place and a humanity and culture tourist destination. Four high-tech film studios equipped with first-rate technologies will be built inside the park, whereas the outdoor settings will maintain the old Shanghai-style atmosphere,” said Wang Jian’er, CEO of Shanghai Film Group.

Artificial intelligence is being applied. Variety shows will use it to provide more imaginative and shocking visual effects for audiences, according to Tian Ming, chairman of STAR Group. 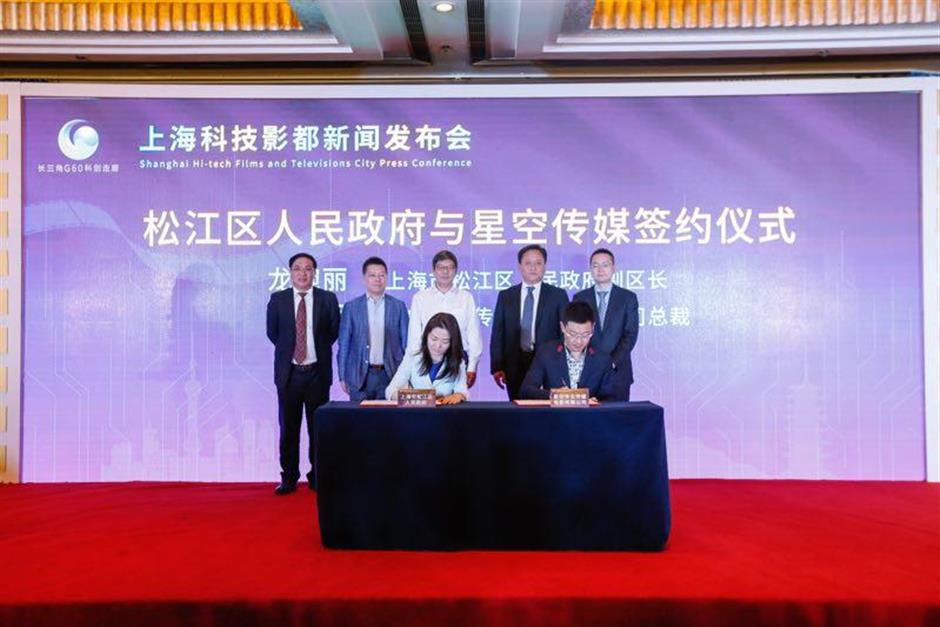 Representative from STAR Group signs agreement with Songjiang government to build a STAR variety show production and research base in the district.

A signing ceremony at the conference between STAR Group and the Songjiang government saw an agreement to build a STAR variety show production and research base. The project is expected to attract 2.5 billion yuan (US$363.9 million) in investment and cover an area of 150 mu (10 hectares).

The G60 High-Tech Corridor vision initiated by Songjiang became a national strategy last year, and the district is also promoting integrated development of the film and television industry in the Yangtze River Delta.

Huace Group, a film production and distribution company in Hangzhou, decided in April this year to build its Yangtze River Delta international film and television center in Songjiang.

So far Songjiang High-tech Film and Television City has about 7,000 registered film and television companies, a third of the total nationwide and generating more than 70 percent of the Chinese film industry’s annual tax revenue.