Boxes on the wall boost charity

Passengers at the Lujiazui Metro station may have noticed a number of strange-looking boxes hanging on the walls.

The POS machines are to raise money for children living in the mountain areas where educational resources are extremely limited.

Passengers can donate 1 yuan (15 US cents) to the Artlink charity fund established jointly by Shanghai United Foundation and Hylink Charity Foundation, by simply holding their smartphones linked to UnionPay or their UnionPay bank cards to the machine.

The money will be used for a distance education project organizing art lectures for seven schools in poverty-stricken areas in Yunnan, Anhui and Henan provinces.

There are 15 POS machines at the station, all programmed to charge just 1 yuan a time.

When passengers make a donation, the machine prints a receipt on which there is a poem composed by a child living in the mountains. A collection of 18 poems will be printed on the receipts.

“Many of these children are very talented,” said UnionPay’s Zhang Qi. “But their voices can hardly be heard because of the mountains and poverty.”

Most of the 18 poems are composed by students from Longxiang Primary School in Huaiyuan Town of Bengbu in Anhui Province. They reflect their yearning to see the world beyond the mountains, and their feelings for parents working in distant cities who they only see once or twice a year.

Wang Jiayu, 11, composed the poem “Grow,” which roughly translates as “Seeds grow quietly beneath the heavy snow, twigs grow from the withered at night. I grow up at places where Mom and Dad never see.”

Gillian Ge, who had just donated 1 yuan, said: “I’m touched by these beautiful small poems for they are so innocent. I think most of us are concerned about charity and the welfare of the kids in the mountains, but we didn’t have enough channels to do something for them.”

Chenchen, a 12-year-old boy, used his father’s phone to make his donation.

“The children who wrote these are about the same age as me,” he said. “I hope they can go to school like me and learn more fun things.”

Tourists Elijah and Ana from America and Mexico were impressed by the charity project. “It’s always good to come across events raising public awareness to help the needy,” said Elijah.

UnionPay’s Ming Guanghao, who is in charge of the event, said the goal is to raise awareness of the problems of children living in the mountains.

“Most people won’t even know these small towns or villages exist, but from the poems they can actually feel for the children,” Ming said. “Their thoughts and wishes travel miles across the mountains to Shanghai.”

According to a 2013 report by the All-China Women’s Federation, there were more than 61 million children living in the mountains whose parents had to work in cities far from home to support the family.

That meant, the federation said, that one child in five in China didn’t get to see their parents on a regular basis.

Ming said that the poems will also be printed on receipts from restaurants and stores for customers using UnionPay.

The charity effort has attracted so much attention that Shanghai Metro had to tell UnionPay to suspend it during rush hours as passengers at the POS machines were blocking the way.

Zhang said many passengers who don’t have UnionPay cards were giving Metro staff coins and asking them to make their donation.

The machines will be at the Metro station until July 28. 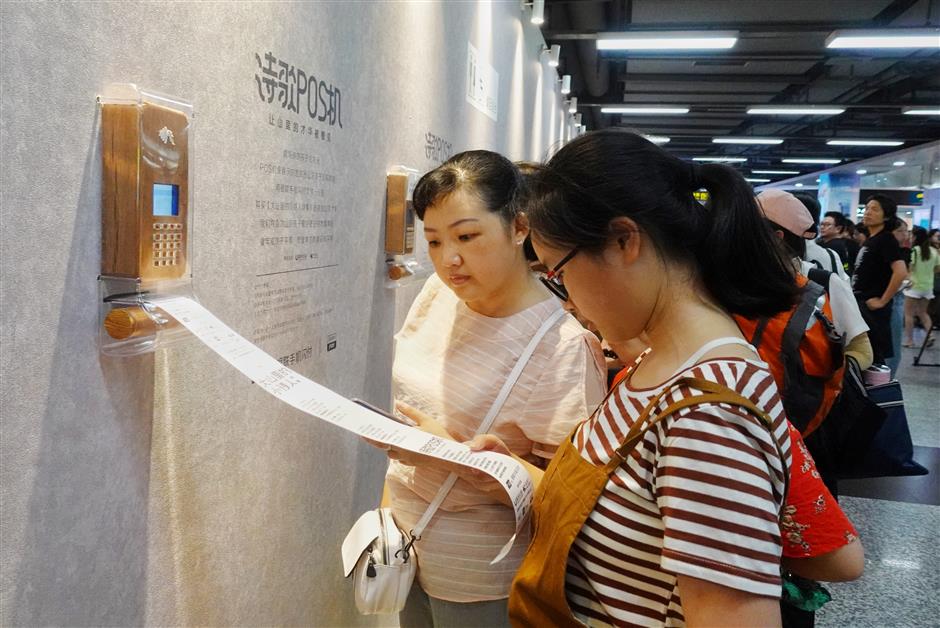 A passenger reads a poem printed on a receipt received her 1 yuan donation at the Lujiazui Metro station on Thursday. 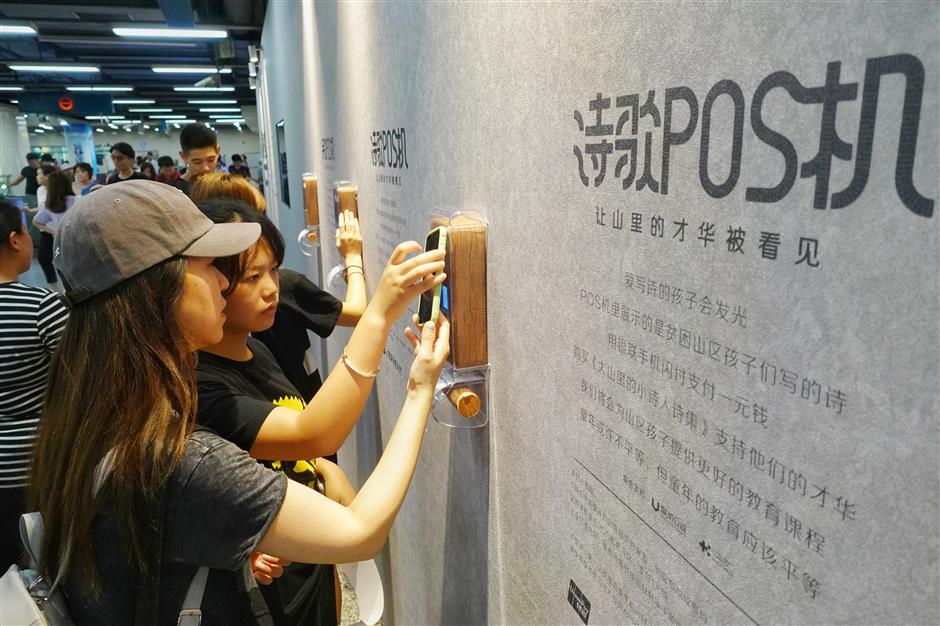 Passengers hold a phone to a POS machine to make a donation at the Lujiazui Metro station.