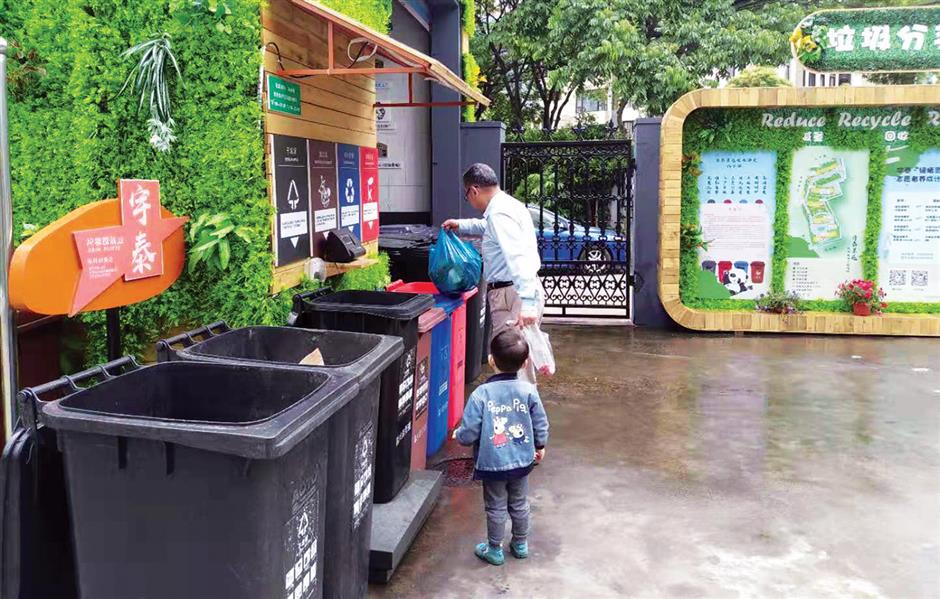 A child watches his grandpa put waste into the correct bin at the Yutai Jingyuan community in Hongkou. Starting this month, Shanghai’s new regulations on garbage sorting have taken effects.

Hongkou District issued 29 warning notices to shopping malls, companies and communities who failed to sort out their garbage when the city’s new regulations took effect on July 1.

Law enforcement officers in Hongkou inspected a shopping mall near the Hongkou Football Stadium transport hub on the morning of July 1 and found flowers, napkins and plastic bags mixed in residual and recyclable bins. Such mixed dumping was also spotted in a restaurant on the fifth floor of the shopping mall.

Regulations state that companies can be fined up to 5,000 yuan (US$727.07) for failing to have the right trash bins in place or refusing to make improvements, and up to 50,000 yuan for failing to sort waste if they refuse to rectify their mistakes.

People in Shanghai can be fined up to 200 yuan if they fail to sort out their garbage properly.

They will be educated on the ruling first, and after that a fine will be issued. The campaign plans to target enterprises first and then individuals.

The authority said they will carry out daily checks and continue to conduct promotion and education in areas with a high number of human traffic and high population density, such as office buildings, commercial areas, hospitals and hotels.

Warnings in Hongkou were issued to the Wojia advertisement company, Hongwei Art Training School, Laoshengchang restaurant and a construction site in Sichuan Road N. subdistrict. The companies had failed to install designated bins, or to sort kitchen and household waste, according to inspectors.

The companies were repeatedly informed of what was required of them, but still refused to follow the rules.

If they fail to rectify the situation after receiving the notice, they may be punished.

In hospitals, schools, wet markets, hotels, construction sites and shopping malls near Sichuan Road N., one of the most popular commercial streets in Shanghai’s north downtown, 95 percent of companies were able to sort and transport their garbage, while all street cleaners in the area have been trained.

The area features a large number of shops and eateries, as well as old residential communities. Surveillance cameras have been installed and caught 17 companies covertly dumping waste into garbage bins on streets. 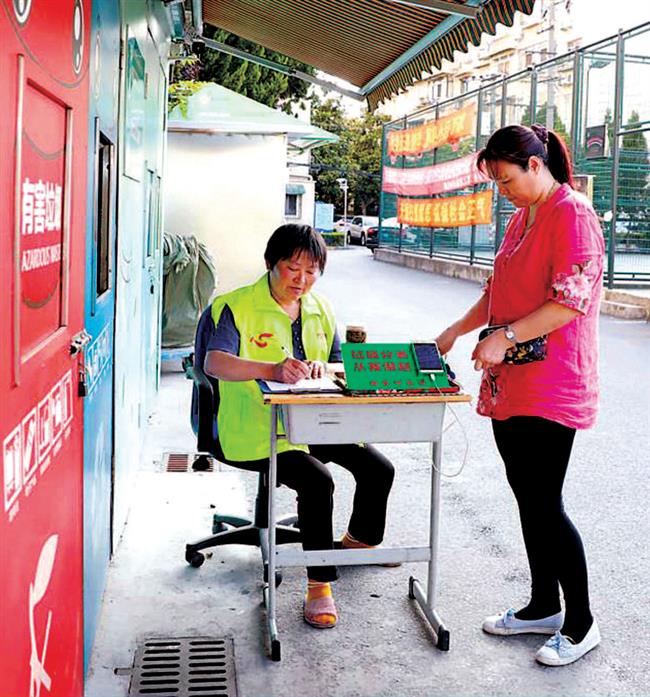 A resident claims bonus points on her “green account” via a volunteer after correctly sorting garbage at the Shanghang community.

The district’s urban management bureau is to launch a three-month inspection as the new regulation took effect.

Over 2,100 law enforcement officers have inspected 873 companies, 216 neighborhoods, 533 government bodies and 88 shopping complexes and office buildings since early this year.

Over 700 individuals have been educated and 290 rectification notices were issued.

Hongkou urban management authority’s next strategy is to enhance supervision on garbage collection, transport and treatment. Several promotion campaigns on garbage sorting are being carried out across the district.

Garbage sorting at high-rise residential buildings have been a major challenge during its citywide promotion.

Yutian Mansion, a 20-story old residential building in Quyang Road Subdistrict, managed to cover waste classification among all its tenants with innovative collection measures and various activities among the residents.

The building at 216 Yutian Road was built in 1996 and has no property management company yet the residents of the 99 households organized a committee to manage the building autonomously.

To implement garbage sorting regulations, the committee has placed classified rubbish bins for wet and residual garbage on each floor.

Residents are allowed to dump between 8am and 9am as well as 3pm and 4pm. Cleaners then gather the garbage and inspect the sorting conditions.

For hazardous and recyclable garbage, residents are required to dump at designated areas in the neighborhood.

All the residents have signed a promise to carry out garbage sorting and they have been active in their endeavors.

Wide promotion of waste sorting has been conducted among residents. Experts were invited to impart garbage separation knowledge, while several meetings have been held among tenants to solicit suggestions and opinions.

Wang Guomei, a 75-year-old senior resident at the building, made a detailed garbage sorting sheet and handed it out to neighbors about the classification of common household garbage.

Amid the garbage sorting promotion campaign across the city, residents in Jiangwanzhen Subdistrict created a promotional song on waste classification in Shanghai dialect.

The song that involves basic waste sorting knowledge in the lyrics aims to better promote an ecological friendly habit among local senior residents. The song made its debut in a flash mob activity in Jiangwan Park as the city’s new regulation took effect on July 1. 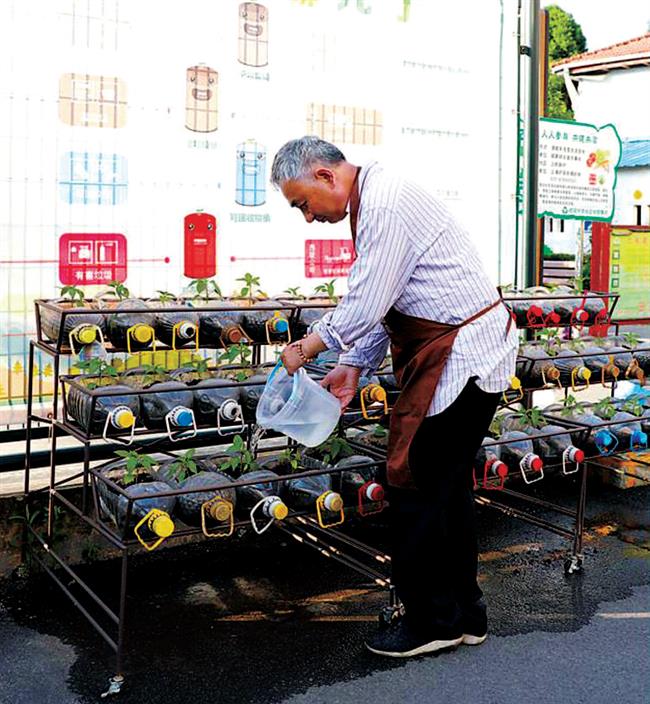 A resident waters vegetables in Shanghang with organic fertilizer made from kitchen waste.

The Jiangwanzhen Subdistrict was once an urban-rural junction in the northeast part of the city.

Former farmlands have been replaced by modern residential communities. Many residents are native Shanghainese who can better understand and communicate in Shanghai dialect.

Volunteers have been singing the song across the neighborhood in the region. Xue Xiaomei, a native resident on Chigou Road, said the song helped her understand how to sort out waste.

The song aims to encourage more local residents to implement garbage sorting regulation and help promote the catchy tune among their friends and families, said Zhu Jiefu, the composer of the ditty.

All the 123 residential communities in the Jiangwanzhen Subdistrict have implemented the garbage sorting regulation.

Over 760 activities have been hosted to promote waste sorting knowledge and tailored plans have been made for every community.

Professional experts were invited to guide residents to classify garbage, while the Yixian singing group, another volunteer team, sang the garbage sorting song at main waste collection sites in the subdistrict.

Some high-tech facilities and surveillance cameras have been installed at the third phase of Rainbow Bay community, one of the largest residential areas in downtown, as residents began moving into their new homes.

The subdistrict revealed it is researching kitchen waste treatment machines within the neighborhood to convert wet waste into ecological fertilizer on site.