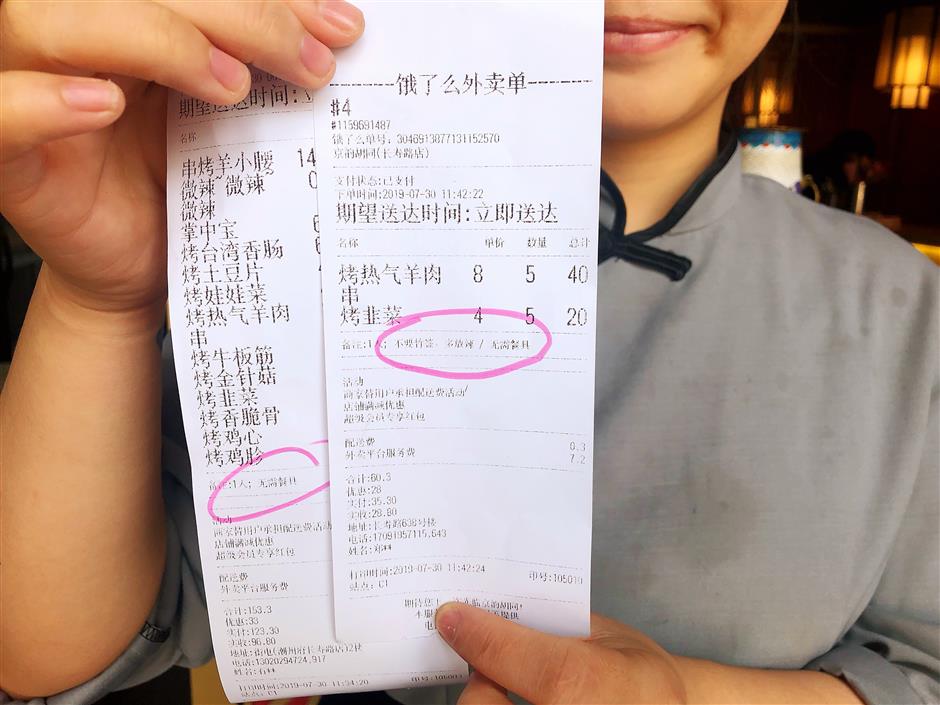 Residents in Shanghai are changing their eating habits to cut down on the volume of trash they produce and make it easier to conform to the city’s new waste-sorting regulation.

That’s evident at the Shihua Jiayuan residential complex in Yanghang Town in Baoshan District, which has more than 500 households.

"The amount household garbage disposed by residents is almost half what it was before July 1,” said neighborhood committee Party secretary Yan Xiuqin, referring to strict new garbage laws that came into effect on that date.

"We find that young people are reducing the frequency of orders from food delivery services and are eating more at restaurants that produce less disposable dishware,” she said. "And when they order food from delivery platforms, they order less as well."

Older people are buying less food when they visit wet markets to avoid waste, she added.

"They also take their own bags along with them more often instead of using plastic bags provided by market vendors,” she said. "As a result, there is a big decrease of leftovers in the garbage bins of the residential complex, and most wet trash is just fruit peelings and seeds."

Before July 1, the community produced an average of more than 10 barrels of wet garbage daily. But now, the figure is seven barrels, according to Yan.

"I dine out more instead of ordering meals from online food delivery services because ordered food comes with disposable dishware garbage," said Liu Ran, a resident living in Minhang District. "I used to buy milk tea with bubbles or pudding in the past, but because I often couldn’t finish it, I now tend to buy pure milk tea.”

The milk tea cup goes into the dry garbage bin, but any contents have to be emptied first into bins for wet trash.

"I have been ordering fewer dishes and rice after July 1, whether at restaurants or online food delivery platforms," said Li Ke, a resident of Yangpu District. "I used to order too much and didn’t eat it all. But now, I don't want to produce a big amount of garbage.”

Some operators of eateries in Shanghai said they have noted the changes.

"We started a take-away service in June, but we’ve received only 50 orders this month, almost half of last month,”  said Wen.

"I have orders asking for less jelly or pearls added to bubble tea, which makes it easier for disposal,” he said. "More people are ordering bubble tea with fewer or no additions.”

A waitress of an outlet of Tarhar Restaurant in Changning District surnamed Wang said that some customers request no skewers when they ordered barbecue food.

"Since the new garbage-sorting regulation took effect, our orders for food delivery have decreased a lot," said a restaurant owner surnamed Wang in Jing'an Temple area of Jing'an District. "We don't offer disposable chopsticks if customers don't ask for them. That used to draw complaints, but now conditions have changed.”

Food delivery app Ele.me said there has been 471 percent increase in requests for no disposable items since July 1.

Those requests were highest in the Pudong New Area, the delivery service said.

In the first week after July 1, fast food catering had the largest number of orders with requests related to garbage sorting, it said. The requests varied, but the goal was the same: reduction of garbage produced.

A consumer ordering bubble tea from an outlet of milk tea chain Yidiandian in the Pudong New Area asked for only 10 tapioca bubbles in response to the requirements for garbage sorting. Since July 1, there had been more than 1,000 milk tea orders with similar requests, according to the app.

Another diner ordering clay-pot rice from an eatery on Dongtai Road in Baoshan District requested one-third of the normal amount of rice, according to the app.

A diner ordering barbecue from Xiaoma Barbecue in Qingpu District asked for no bamboo sticks.

Since July 1, there had been more than 1,500 orders with similar requests, according to the app.

Major online food delivery platform Meituan said there was nearly a 500 percent surge in orders between July 1 and 7 requesting no disposable items.

The Pudong New Area and Minhang and Baoshan districts had the largest increase of people making that request, according to Meituan.