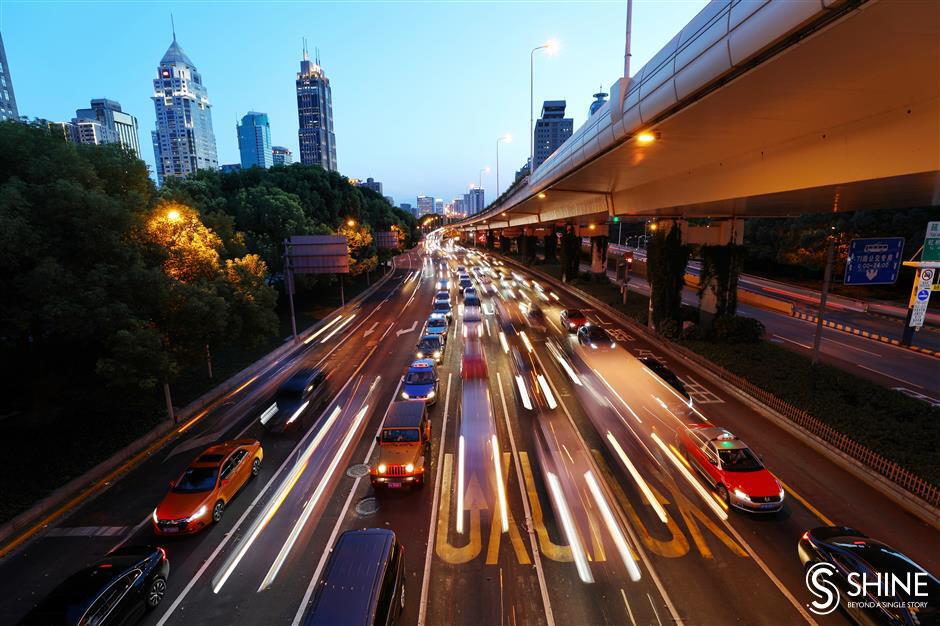 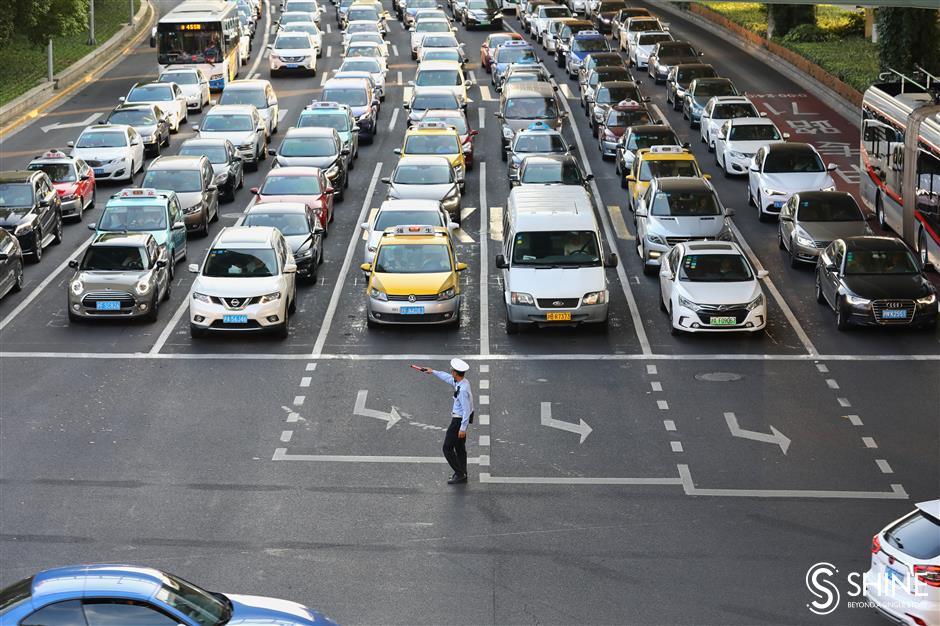 Traffic police are targeting congestion at 104 of the 140 elevated road off-ramps.

Police said on Tuesday tailor-made solutions had been worked out for each off-ramp.

“If long columns of cars are piled up on this part of the elevated road, the junction of this one and the South-North Elevated Road not far ahead will be affected,” said Xu.

Under the new plan, once a traffic jam is spotted, officers of the elevated road squad and those of a patrolling squad on the ground nearby, as well as traffic police assistants will be mobilized to streamline traffic in all four directions at the intersection of Huashan Road and Yan’an Road M.

A traffic jam, according to the police, can be solved in 10 minutes.

At the Xizang Road off-ramp of Yan’an Elevated Road which is close to the People’s Square, police now give priority to cars coming down the ramp to Yan’an Road E., relieving congestion in five to 15 minutes.

Zhu Yiqing, vice head of the elevated road squad of Shanghai traffic police, said officials of different squads keep in touch with each other through WeChat groups to ensure that congestion cases are communicated and addressed efficiently.

Apart from trouble-shooting, police are also taking steps to address congestion through measures with sustainable effects.

Traffic on the Xizang Road S. off-ramp of the Inner Ring Road to the No. 9 People’s Hospital is busy, especially on Mondays and Wednesdays when many specialists are seeing patients.

To tackle the problem, traffic cameras have been installed on Zhizaoju Road between Zhongshan Road S. and Xietu Road to deter illegal parking.

Zhizaoju Road, which is a must-take route from the off-ramp to the hospital, has only two lanes in the same direction. Adjacent streets such as Quxi Road and Runan Street all have limited traffic capacity.

Yang Yang, an official of a squad of the Huangpu District traffic police, said they have improved traffic conditions.

“During congested hours, we will deploy more police officers to Xizang Road and Quxi Road to make traffic flow on Quxi Road, and in the meantime guide motorists to park their cars in different parking lots nearby,” he said.

Elsewhere, such as at the intersection of Wuzhong Road E. and Zhongshan Road W. next to the Wuzhong Road off-ramp of the Inner Ring Road, police officers and their assistants also help when traffic becomes congested.

Zhang Quanli, a motorist, said the congestion of the Jinke Road off-ramp from east to west of the Middle Ring Road in the Pudong New Area seems to have been relieved after the addition of a right-turn lane, but problems remain elsewhere.

At the Minxing Road off-ramp on the same ring road in Yangpu District, two lanes down the ramp become three lanes at the intersection ahead, and the straight lanes are often occupied by cars which are to turn left, she said.

“Cars going for different directions should be separated far ahead of the intersection, or the duration of the green light needs to be extended,” she suggested.

Lu Yifeng, another motorist, said the illogical street planning is coupled with traffic offenses, which complicate the problem.

“Some motorists illegally change lanes and cut in ahead of others to get off, causing congestions,” he said. “This problem can be addressed by drawing longer white concrete lanes on the elevated road ahead of the off-ramps and adding more police cameras to catch rule breakers.”

The new measures probably contributed to Shanghai no longer being in the 10 most congested cities in China during rush hours. This is according to a report by Amap and several research institutes which analyzed urban traffic in major Chinese cities for the second quarter of this year.

The report ranks Chongqing as the most congested city in China during the period, with an average traffic speed of 24.95 kilometers per hour during rush hours. The southwestern Chinese city is closely followed by Harbin and Beijing.

Shanghai traffic police said they have been making efforts in various aspects to improve the traffic in Shanghai, including the introduction of more versatile traffic police cameras which can monitor multiple traffic offences at the same time.

Shanghai, a city of 24 million residents, had 4.2 million motor vehicles at the end of last year, according to the city’s statistics authority.