A baggage handler helps arrange luggage at one of the carousels at Pudong.

Baggage handlers at Pudong International Airport have been praised by travelers and airlines, both domestic and foreign, for their help after flights arrive in the city.

Eighty-four uniformed “baggage ambassadors” have been helping passengers in the arrival hall at Pudong since March 2017.

They wear gloves and ensure luggage tags are made visible to make it easier for passengers. They arranged the luggage in order and turn wheels inside to protect cases from bumping into each other. If needed, they help the elderly and disabled people get their luggage.

They deal with over 2 million pieces of luggage on average every month for passengers on about 18,000 flights, and their work has been praised by airlines and passengers alike since the service was launched, an airport spokesman said.

Travel writer Liu Xiaoshun said he was surprised at such a detailed service that was rare at other airports.

“Such considerate services make Shanghai one of the most advanced cities in China,” Liu noted on his Weibo microblog. His post on Saturday was later echoed by many other travelers who had been helped by the baggage handlers.

Song Yanmei, 39, one of the handlers at the T2 building, said she was bending down and getting up over 1,000 times a day during the spring and summer holidays. "It is really hard work, especially for international flights," she said.

Her colleague, Rao Xiao, said he would spend half an hour arranging some 300 cases from a single international flight. “The workload will double for flights from Dubai operated by the A380 Superjumbo,” said Rao.

A baggage handler at Pudong ensures that name tags can be easily seen by waiting passengers.

The airport authority assigned the handlers after baggage was often mistakenly taken or bumped into each other on carousels, said a Pudong airport official. The handlers usually work in two shifts but will work together when there are massive flight delays and at peak travel periods.

The handlers have helped reduce waiting times for passengers at the carousels, the official said. Each handler has to arrange about 1,700 pieces of luggage on average a day and they can weigh as much as 40 kilograms.

To prevent mistreatment before the baggage arrives in the hall, there are cameras installed over conveyor belts on the tarmac so passengers can see how their cases are being handled as they watch screens beside the carousels while waiting for it to arrive.

At Hongqiao airport, meanwhile, three trolley sterilizing facilities at the T1 and T2 terminals have been installed.

Business travelers account for 70 percent of its passengers and usually carry smaller baggage than passengers at Pudong. They may not need baggage handlers at carousels but most will use trolleys, an official said.

Each of the ultraviolet sterilizing facilities, one at T1 and two at T2, can sterilize eight trolleys at a time in minutes.

Other new services at Hongqiao include a luggage delivery service. Passengers can hand their luggage to airport staff after landing for being delivered to a designated address around three hours later. 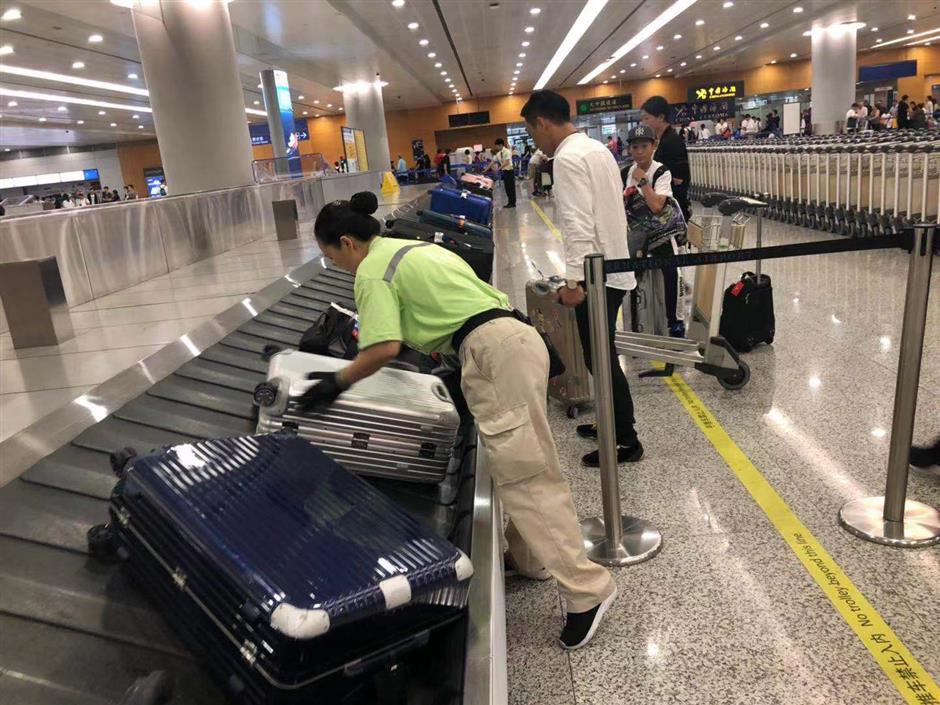 A baggage handler arranges luggage on a carousel at Pudong International Airport.