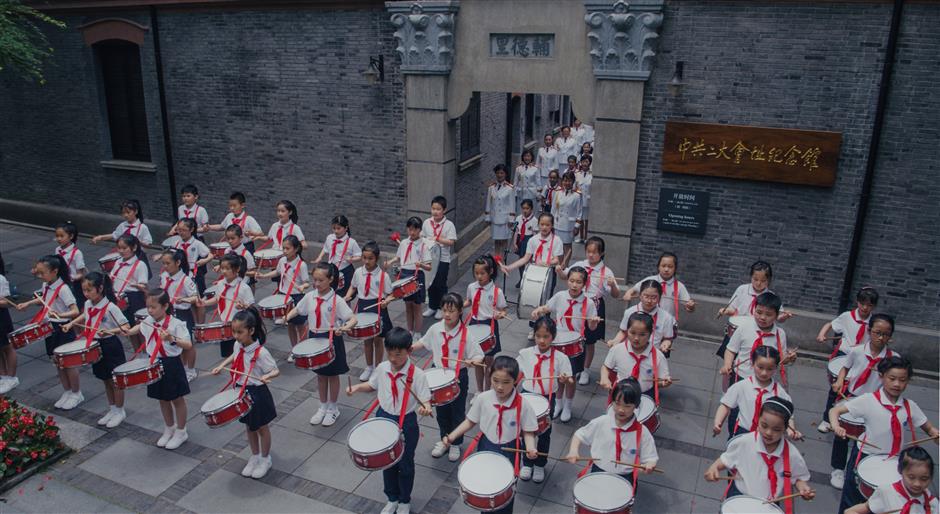 Children play drums at the Museum of the Second National Congress of the Communist Party of China in a special "flash mob" event held on July 1 to celebrate the 98th anniversary of the founding of CPC. 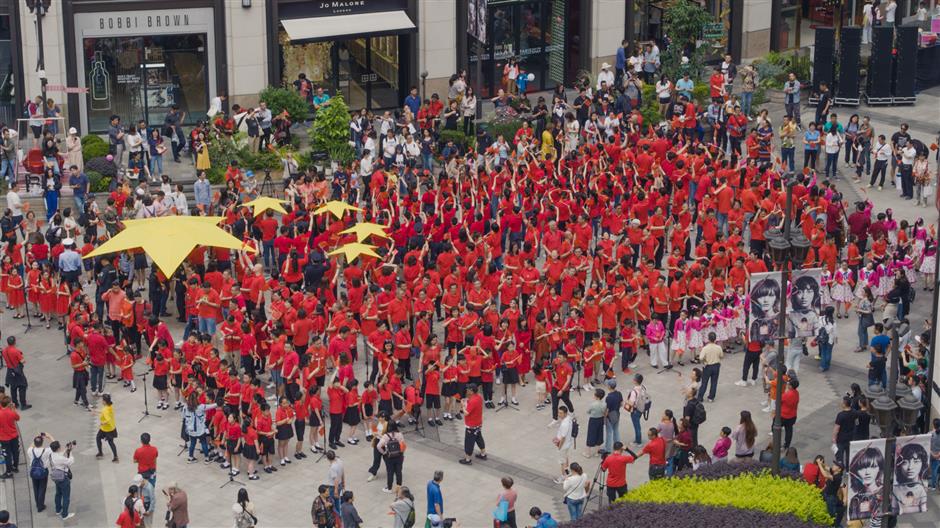 People in red T-shirts formed a huge national flag at the HKRI Taikoo Hui mall in a special “flash mob” event held on July 1 to celebrate the 98th anniversary of the founding of the Communist Party of China.

Pop and opera singers joined local students and workers in a mass rendition of the classic song "My Country and I” in the grand square of the shopping mall. It was the same patriotic song performed at the Second National Congress of the Communist Party.

Onlookers also joined in the chorus. The event attracted foreign passers-by. Though they didn’t recognize the song, they seemed happy to accept small national flags distributed by volunteers.

Similar large national flags were seen at other district landmarks, including the Shanghai Exhibition Center and the Shanghai Natural History Museum.

A video documenting the flash mob will be broadcast in local mainstream channels through October, when the 70th anniversary of the founding of the People's Republic of China will be celebrated.

Meanwhile, a special video featuring aerial footage of district landmarks, captured by drones, has become popular among residents. From high up the sky, people can see their familiar Jing’an from a different perspective. Here are some of the sites highlighted in the video.

The sites highlighted in the video 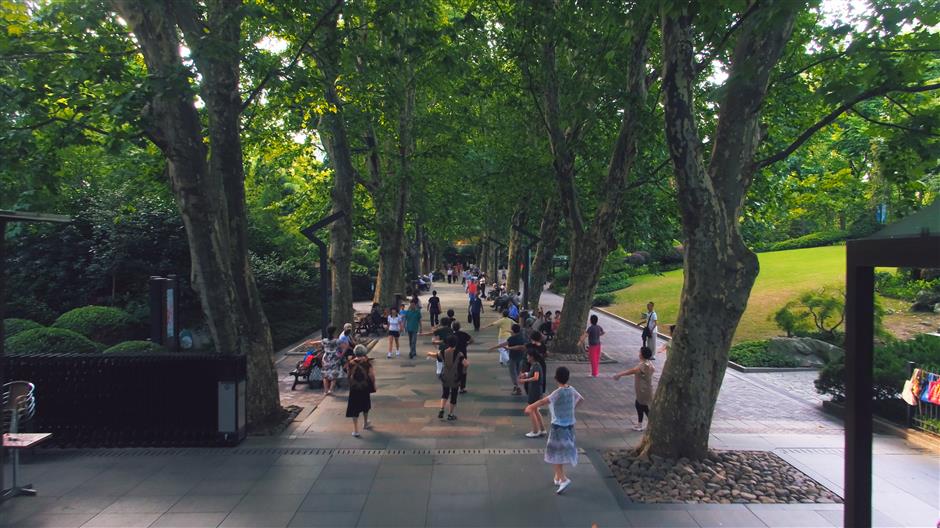 Tucked away in the concrete jungle of the Nanjing Road W, 65-year-old Jing’an Park across from the Jing’an Temple is an oasis for workers and visitors seeking a respite from urban bustle. It is home to old plane trees, beautiful lotus ponds and delicately sculpted pavilions. 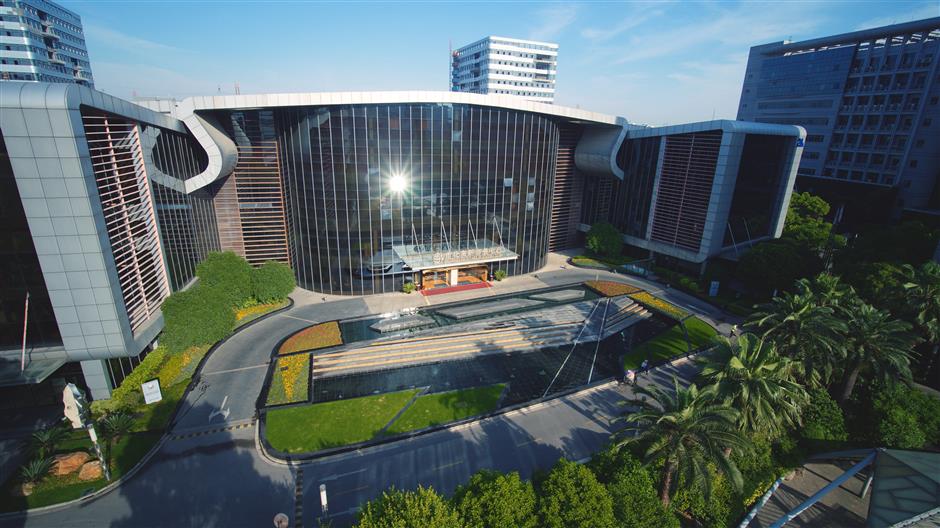 Shibei is a prime example of how traditional smokestack industries in the old Zhabei district have been converted into clean enterprises.

Over the years, factories have moved out, replaced by modern businesses and residential complexes that are eco-friendly.

Beginning in 2010, Shibei embraced the global digital revolution, transforming itself into an information technology hub.

It is now home to the Shanghai Data Exchange, China’s leading big data center, which can handle an average 30 million pieces of data every day. It has led Jing’an to be called the “gray matter” of Shanghai’s ambitious plans to create a “smart city.” 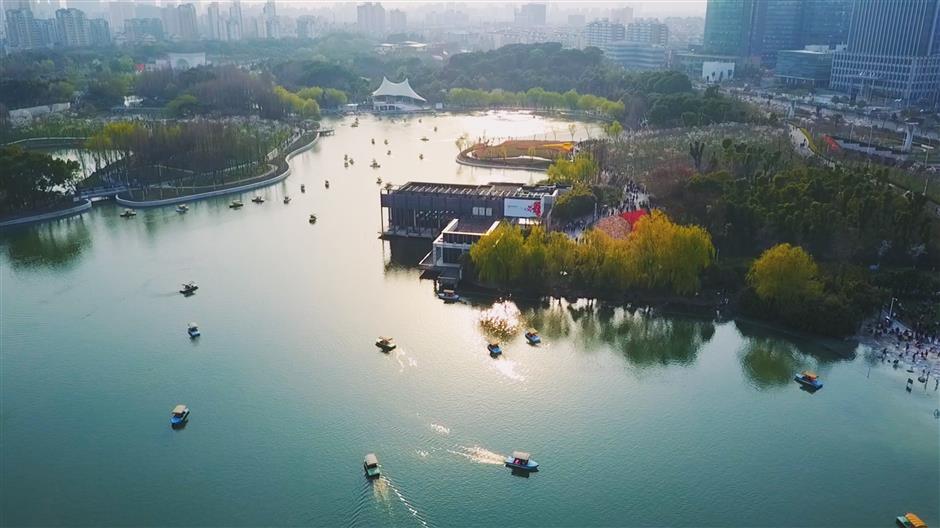 Daning Park, opened in May 2002, is one of the largest parks in downtown Shanghai,

covering an area equivalent to more than 95 football pitches,

It features beautiful landscaping and artistic rockery. Its iconic landmark is a quarter-hectare beach made with thousands of tons of imported white sand.

As the only white sand beach in a park around Shanghai, it has become a popular destination for campers and the site of wedding photos for newlyweds.

Every spring, millions of tulips in the park come into full blossom, making the park a popular spring outing. 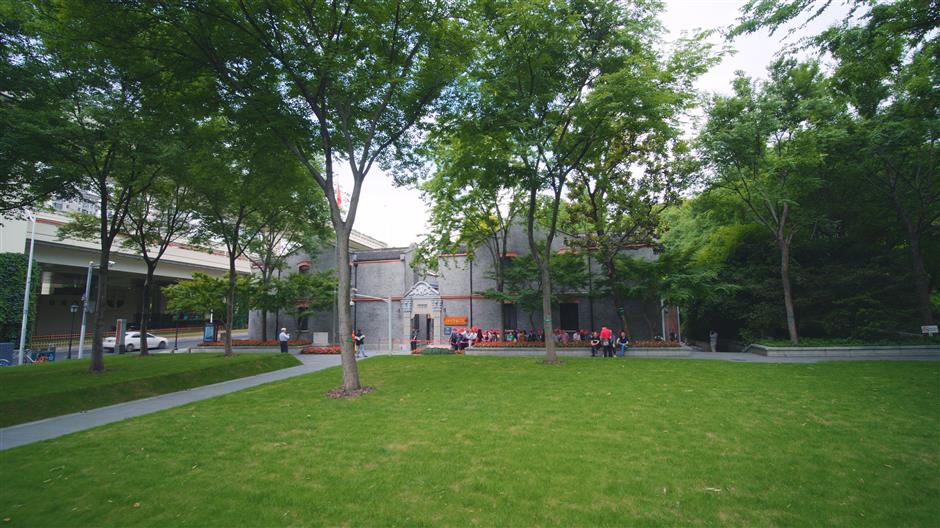 This is one of the most popular “red” revolutionary sites in the city, receiving an average of 3,000 visitors every day.

It is the site of the first plenary session of Second National Congress, which was held in 1922. At the time, 12 Party delegates gathered in secret at the residence of Li Da in the Fudeli neighborhood, one of a few underground sites that managed to escape police raids. There, the group drafted the first Party constitution. 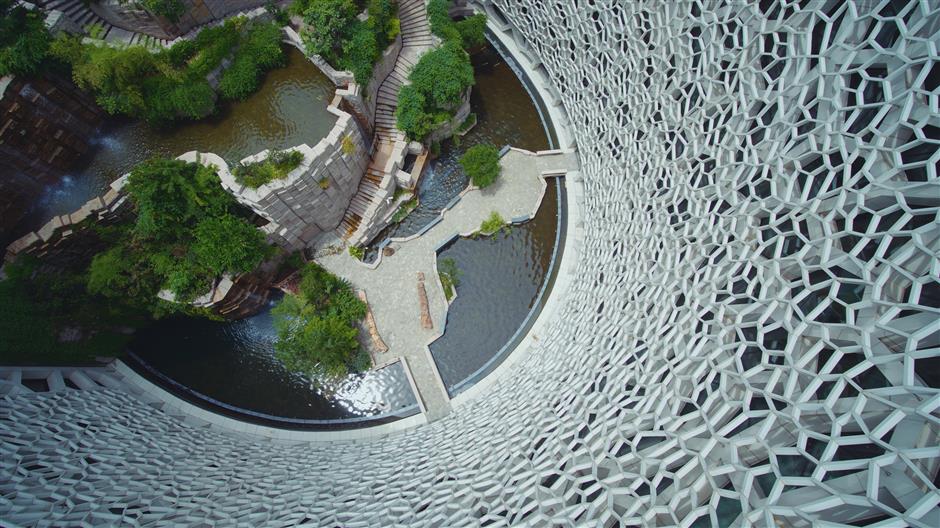 The museum, previously located near the Bund area in Huangpu District, reopened in the Jing’an Sculpture Park in April 2015 with a totally new look. Its five floors constitute one of China’s largest museums, with nearly 290,000 specimens in its collection and a room to display 11,000 items at any given time. Exhibits include the complete skeleton of a 140-million-year-old mamenchisaurus, a sauropod dinosaur. 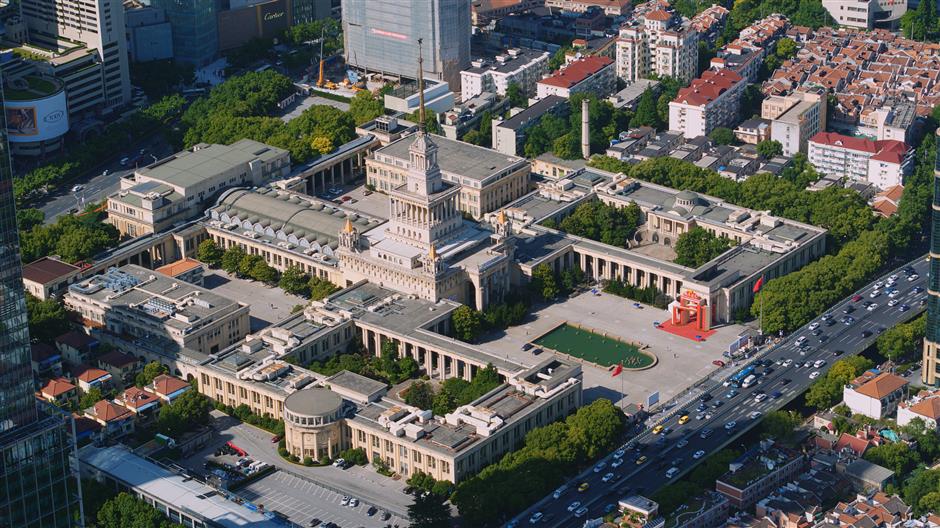 Sandwiched between the Yan’an and Nanjing roads, the center reflects an architecture dating back to the era of Soviet influence.

The complex was completed in 1955, thanks to the joint efforts of architects from China and the then Soviet Union. It is modeled on the St Petersburg’s Admiralty, with some Chinese political elements embedded in the décor. 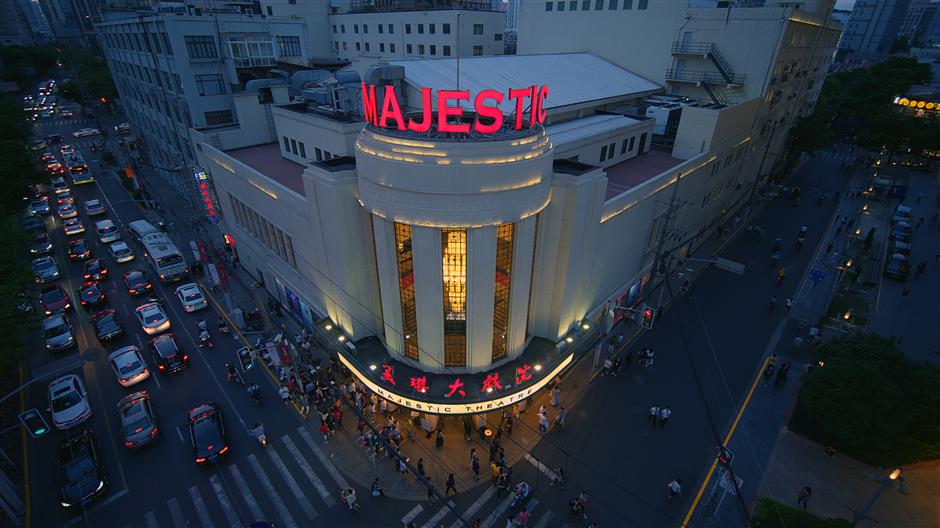 Built in 1941 in the art deco style, the site is one of the oldest theaters in Shanghai and was the first in the city to screen Western films.

The theater served as one of the backdrops in Taiwan director Ang Lee’s 2007 film “Lust, Caution,” which was adapted from the 1979 novel of the same name by Chinese author Eileen Chang.

The theater underwent massive renovation beginning in 2010 and was reopened to the public in April 2016.

The floors were repaved with terrazzo made by traditional craftsmen. The copper door handles were repaired, and handrails on the second floor were redone in paint made in France. The theater marquees, in red, were inlaid in glass. 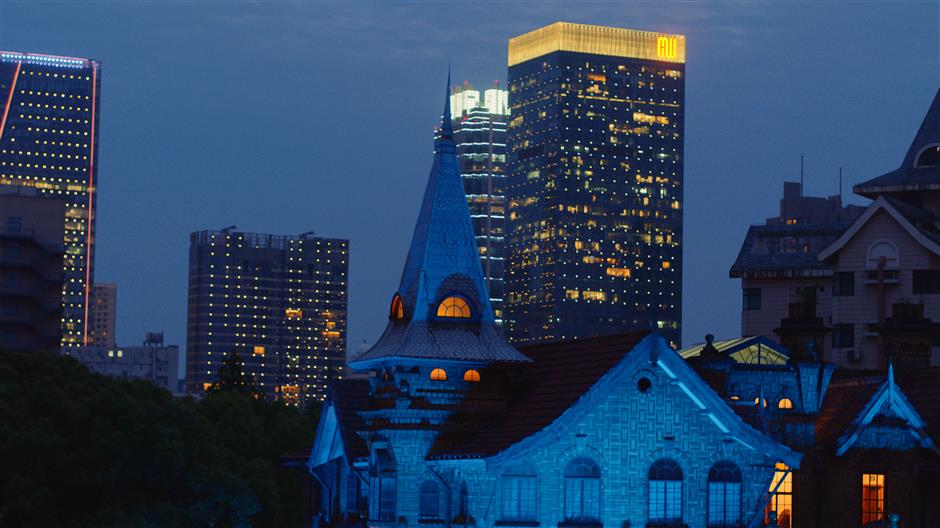 The Scandinavian-style villa, completed in 1936, was inspired by the fairy tales of Hans Christian Andersen. The villa features brown and multicolored tiled Gothic and Tudor steeples, gables and spires. It was a gift from British businessman Eric Moller to his daughter. Now, it houses a hotel and restaurants. 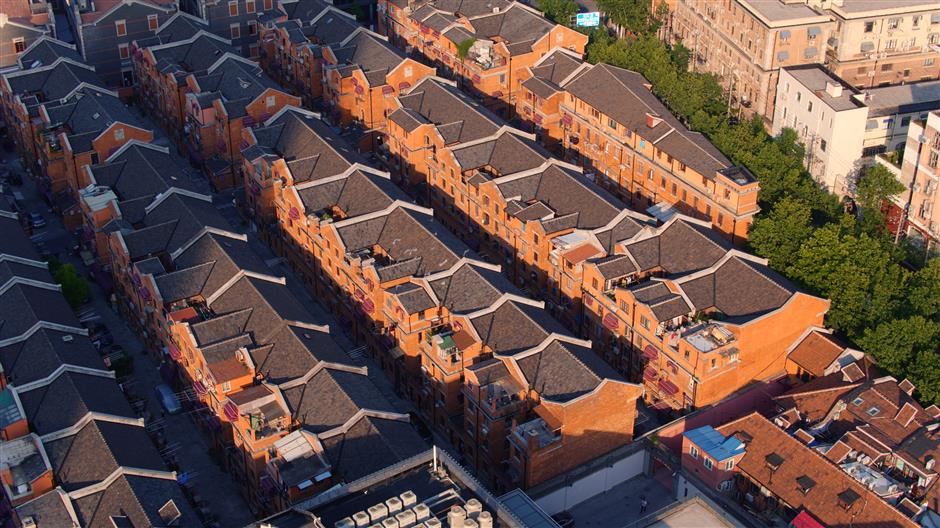 In the heart of downtown Shanghai, this neighborhood is the city’s largest renovation of a traditional neighborhood of shikumen houses.

The area was one used by the English to breed horses. In 1932, 183 Anglo-American style red brick buildings were erected to house wealthy Westerns, entrepreneurs, celebrities and intellectuals.

During the 1970s, many of the prominent families moved away, and their houses were partitioned into smaller flats occupied by multiple families. Nowadays, craftsmen mingle among older residents in long alleyways, harking back to the environment of Old Shanghai. 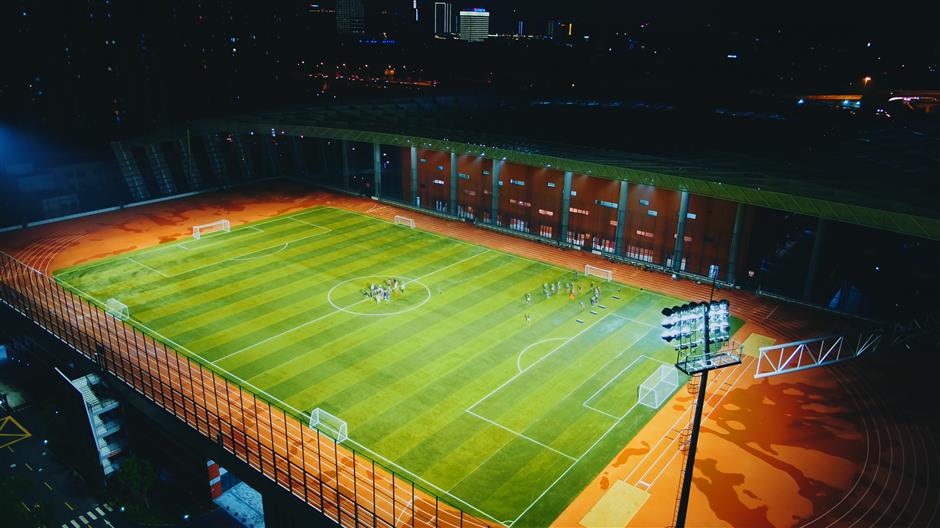 The center, which covers 61,733 square meters, dwarfs all other sports centers in the downtown area.

It features a rooftop football field 13 meters above the ground, with seating for 750 people – a first of its kind in Shanghai,