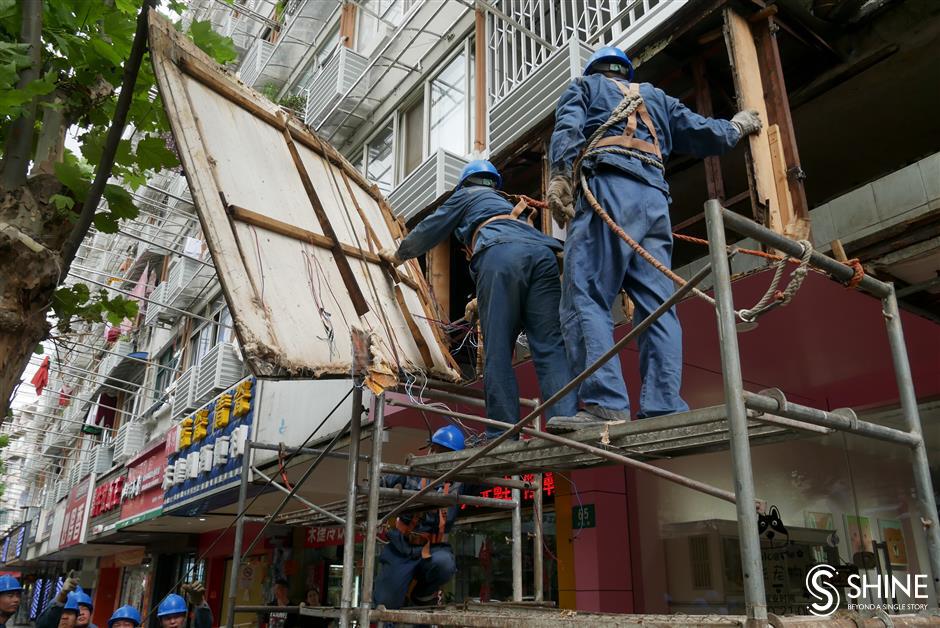 Workers remove a shop signage in Shanghai on August 9, 2019. 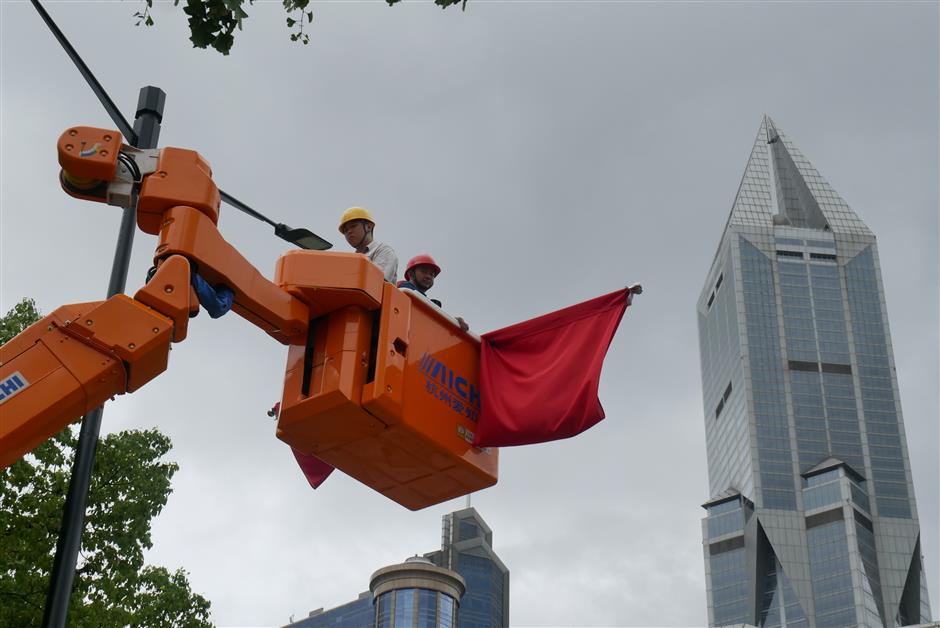 Workers take off national flags under a typhoon alert in People's Square.

Shanghai Meteorological Bureau upgraded a blue typhoon alert to a yellow one at 1pm on Friday.

Some tourist attractions in Shanghai have temporarily closed amid safety concerns as typhoon Lekima is approaching.

The Qingxi Countryside Park in Qingpu District will shut on Saturday and Sunday to ensure the safety of tourists.

The Jinshan City Beach in suburban Jinshan District did not open on Friday and will remain closed on the weekend.

The Donglin Temple in Jinshan will close on Saturday and Sunday, while the Huakaihaishang Ecological Garden, a flower park in Jinshan, will close from Saturday.

It will reopen when the typhoon alert is lifted, its operator said.

The Langxia Ecological Park in the same district closed on Friday and will not open on the weekend.

A lecture at Guyi Garden on Saturday has been delayed to next Saturday.

The night tours at the Shanghai Zoo scheduled on Friday and Saturday night will be canceled.

The Shanghai Binhai Forest Park in the Pudong New Area will close over the weekend, while the Shanghai Flower Port in Pudong will close from Saturday until typhoon alert is lifted.

A huyu (Shanghainese dialect) competition and reading activities at the Pudong Library over the weekend will all been canceled.

The Shanghai Daguanyuan Garden, or Grandview Garden, in Qingpu District and Guyi Garden in Jiading District will close on Saturday and the reopening time depends on the weather conditions.

The Haiwan National Forest Park in Fengxian District has closed from Friday afternoon.

A free puppet performance scheduled on Friday night at the Huangpu riverfront area has been canceled as well.

Lekima, the ninth typhoon this year and currently a super typhoon, was about 275 kilometers southeast of Wenling City, neighboring Zhejiang Province, at 9am on Friday, according to China's National Meteorological Center.

It is moving northwest at about 20 kilometers per hour and is approaching the coast of Zhejiang.

It is forecast to make a landfall in the coasts of Xiangshan and Cangnan areas of Zhejiang before dawn on Saturday with a gale level of 14 to 16.

It will move north after making a landing with its power weakened.

The typhoon will bring downpours and gales to Shanghai with the time between Friday night and Sunday morning the worst.

The heaviest rainfall can reach more than 250 millimeters.

From 6pm Saturday to 9am Sunday, all trains on the Ningbo–Taizhou–Wenzhou route in neighboring Zhejiang Province will be suspended.

The Jinhua–Wenzhou route will be suspended from 6pm Saturday as well, and won’t be restored  before Monday.

From 8am Sunday to 6am Monday, all trains on the Hangzhou–Shanghai route will be suspended.

All trains on the section between Shanghai and Zhenjiang in neighboring Jiangsu Province of the Shanghai–Beijing route will be suspended from 9pm Sunday to 6pm Monday.

There will be notifications on the 12306 website and app.

Those who have already purchased tickets of suspended trains can get a full refund from the ticket windows at train stations or the 12306 app and website within 30 days.