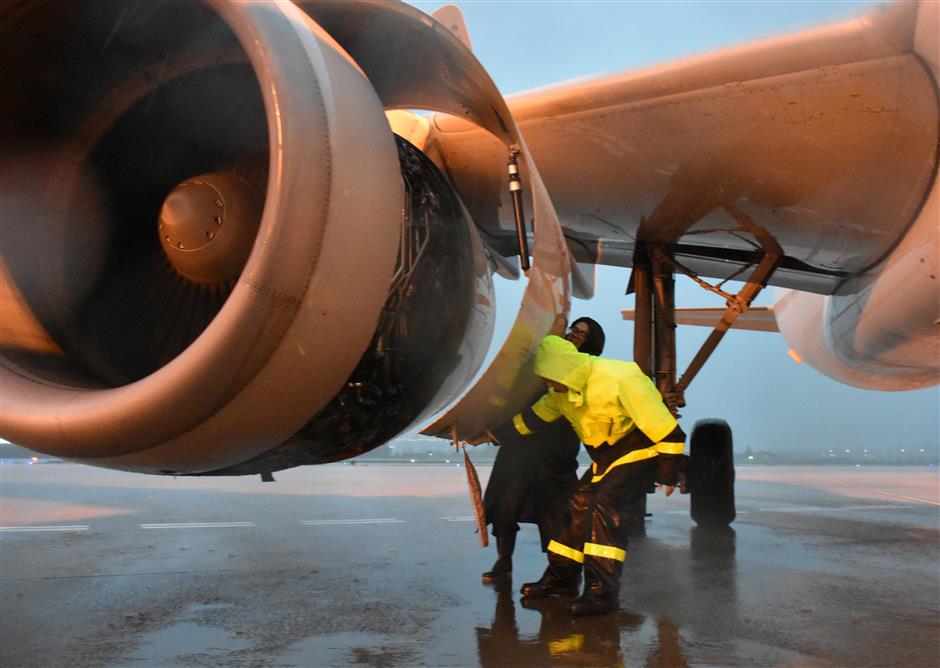 China Eastern staff make sure an aircraft berthed at the Hongqiao airport is secure.

An orange typhoon alert was issued by Shanghai Meteorological Bureau at 10:10pm on Friday, while a yellow rainstorm alert remained.

Lekima, the ninth typhoon this year, was about 360 kilometers south of Shanghai at 9pm, the bureau said.

Over 500 flights were canceled at Shanghai's two airports on Friday and more will follow because typhoon Lekima is likely to make landfall in neighboring Zhejiang Province on Saturday morning.

Hongqiao International Airport canceled 320 flights as of 9pm, while the Pudong airport canceled 200, according to the Shanghai Airport Authority. Mass flight cancellations and delays are expected to affect both airports on Saturday.

The air traffic controller has issued an alert for flight delays at both airports and expects their takeoff and landing capacity to be reduced by half to midnight on Saturday.

Shanghai-based China Eastern Airlines canceled 60 flights at Hongqiao and 97 at Pudong on Friday. Updated flight information will be available on the carrier's website, microblog and app.

The airline has stabilized all its vehicles at the city's airports while aircraft at berth overnight have been secured to the tarmac with cables. More airport service and crew members have been dispatched to serve stranded passengers at both airports.

Juneyao Airlines announced the cancellation of all takeoffs and landings in Shanghai on Saturday except for an international flight to Helsinki. Juneyao plans to cancel 285 flights between Friday and Sunday due to the typhoon.

Spring Airlines cancelled over 50 flights to and from both city airports on Friday. Four flights due to land at Pudong on Saturday — from Urumqi in the Xinjiang Uygur Autonomous Region, Yangon in Myanmar, Tokyo and Sabah in Malaysia — have been cancelled.

China Southern cancelled 57 flights due to takeoff or landing at Pudong and 16 at Hongqiao on Friday and Saturday, while Air China has cancelled over 40 domestic and international flights in Shanghai. 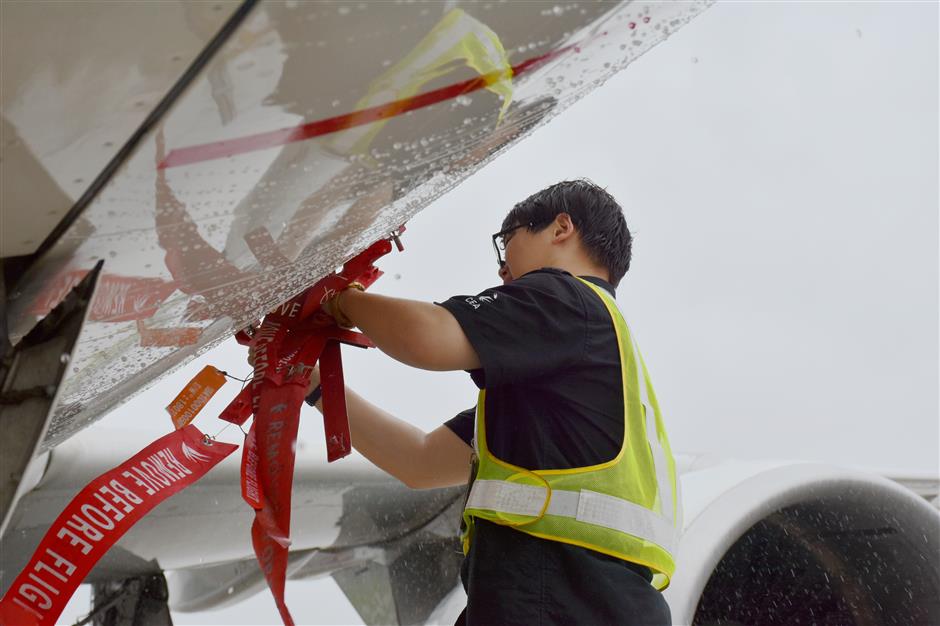 China Eastern staff stabilize an aircraft being berthed at Hongqiao airport as strong winds and rain hit the area on Friday. 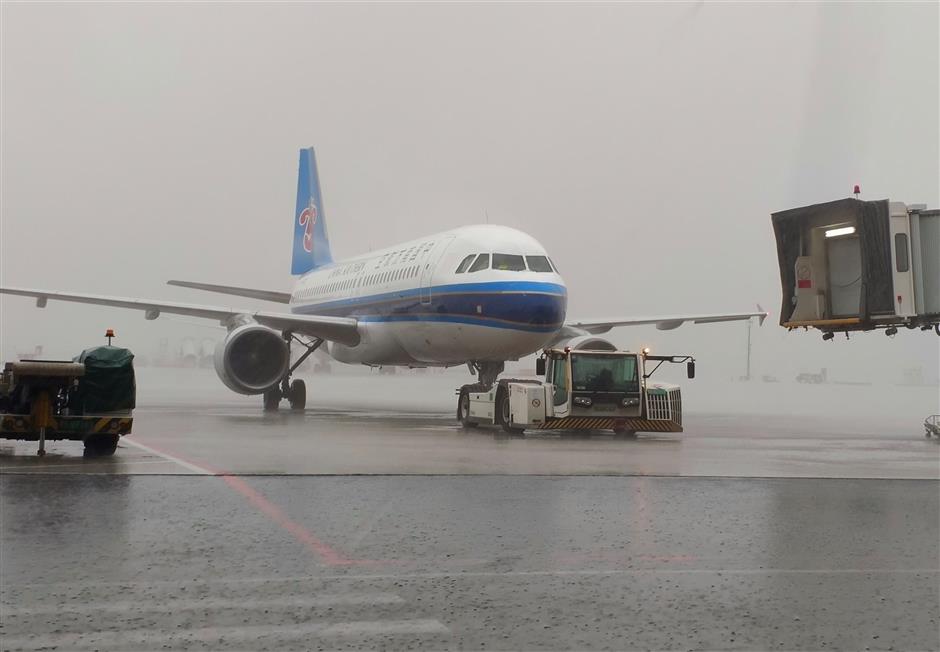 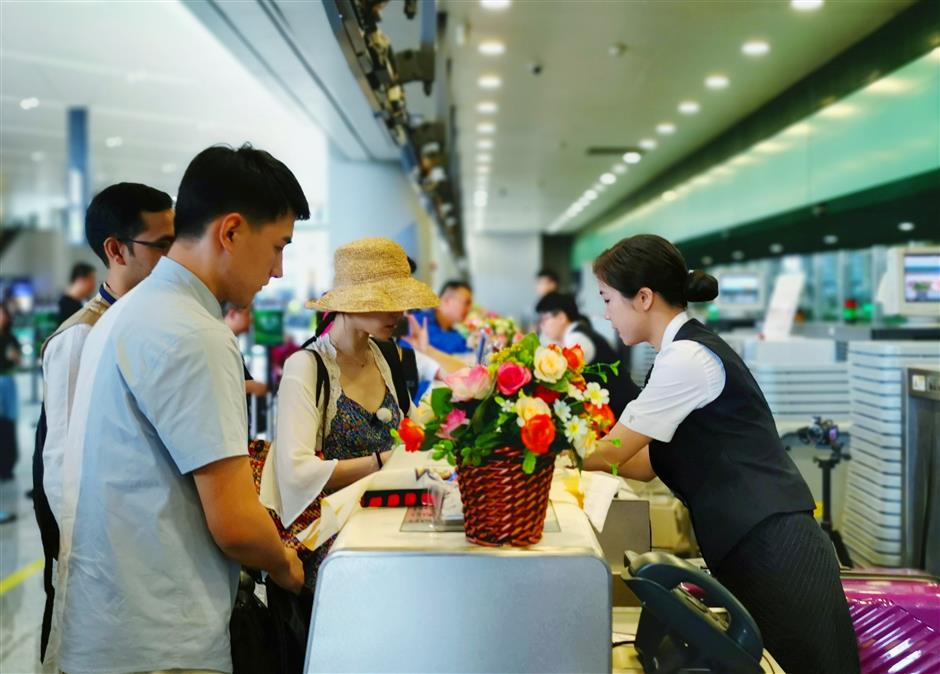 Passengers check their flights at a ticket counter at Pudong. 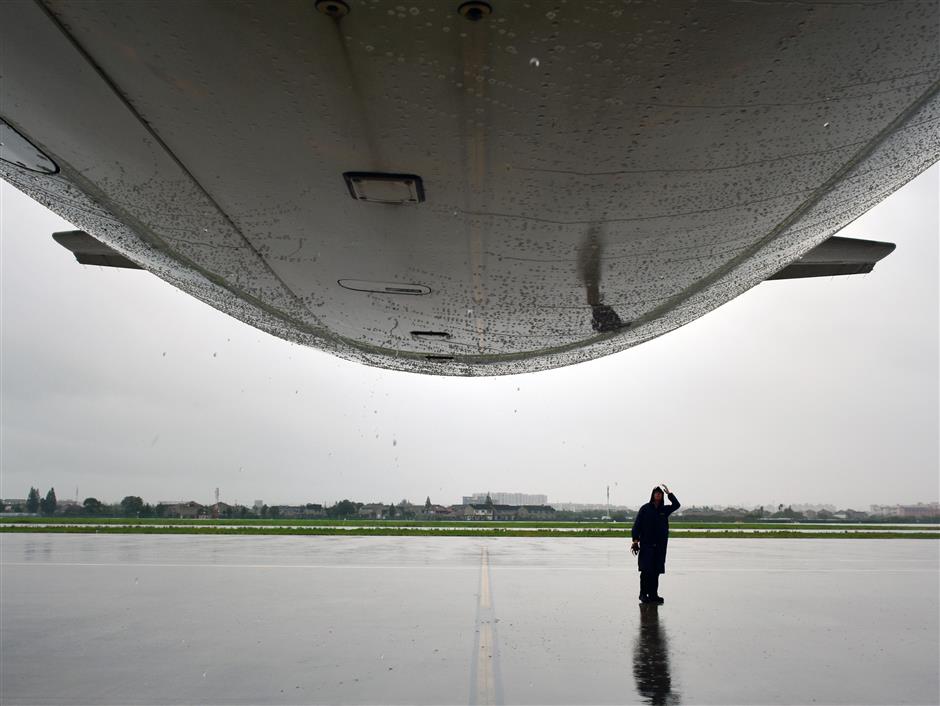 An engineer braves the weather to inspect an aircraft being berthed at Hongqiao on Friday.