After the typhoon, hot weather is back 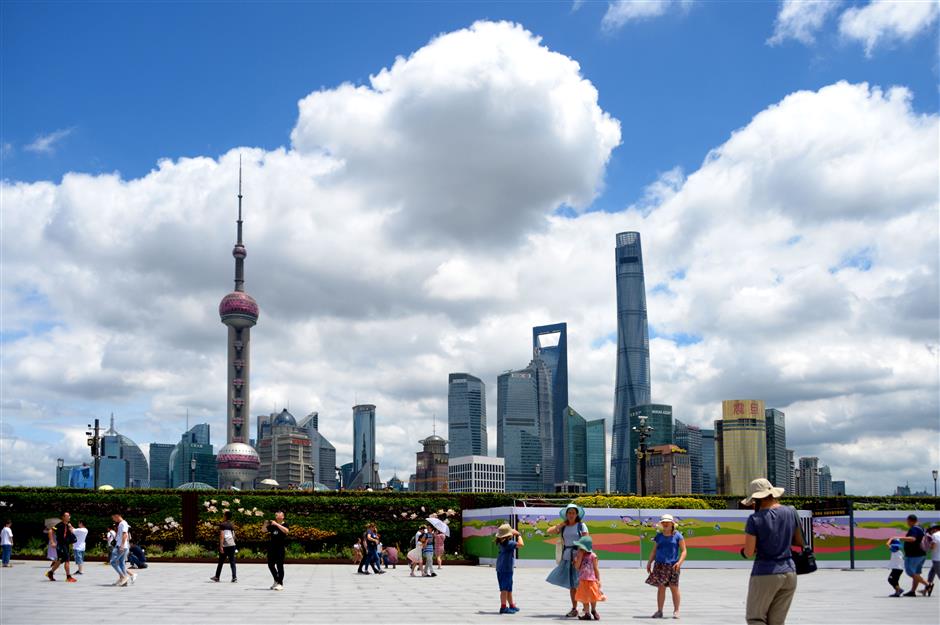 People enjoy the clear sunny skies on the Bund yesterday after typhoon Lekima lashed the city over the weekend. It is forecast to be mostly cloudy and hot this week.

Sunny and sizzling weather will be back this week after typhoon Lekima lashed the city over the weekend, the Shanghai Meteorological Bureau said.

The bureau lifted the yellow typhoon alert and blue rainstorm alert at 6am on Sunday, and the blue alert for gales at 5pm as Lekima moved north toward Shandong Province, and the city began to get back to normal.

Shanghai was lashed by rainstorms caused by Lekima from Friday and the total rainfall of most areas was between 150 and 250 millimetres with an average of 167 millimeters, according to the city's flood control office.

A total of 259,000 people were evacuated, and about 2,400 hectares of farmland was flooded. Power lines were also cut and roads flooded.

Fengxian, Minhang, Jinshan districts and the Pudong New Area were the worst hit, and the Zhonggangzha rainfall station in Fengxian District recorded 272 millimeters of rain, the heaviest of all.

The biggest hourly rainfall was recorded by the Qibao weather station in Minhang District — 102 millimeters.

Pujiang Town in Minhang had a total of 276 millimeters of rain, the biggest among all sub-districts and towns.

Winds were strongest at Yangshan Port and nearby coastal areas, hitting gale force 13 to 15.

Water levels in the Huangpu River, Suzhou Creek and Jiading, Qingpu, Songjiang and Jinshan districts were 0.15 to 0.55 meters above the alert level. Zhaotun weather station on Suzhou Creek hit a record 4.01 meters, according to the office.

After the typhoon, the city's air quality was excellent, and the AQI stood at 27 at 6pm on Sunday.

It should be cloudy on Monday with the temperature ranging between 27 degrees Celsius as a low and 34 degrees as a high, according to the bureau.

On Tuesday, the mercury should remain the same and it will be cloudy as well. Wednesday's high will be two degrees lower and thunder and showers are forecast.

Thursday should be cloudy with thunder and showers, with a high of 33 and a low of 27 degrees. Friday is expected to be cloudy.