Word on the street is true love runs smooth 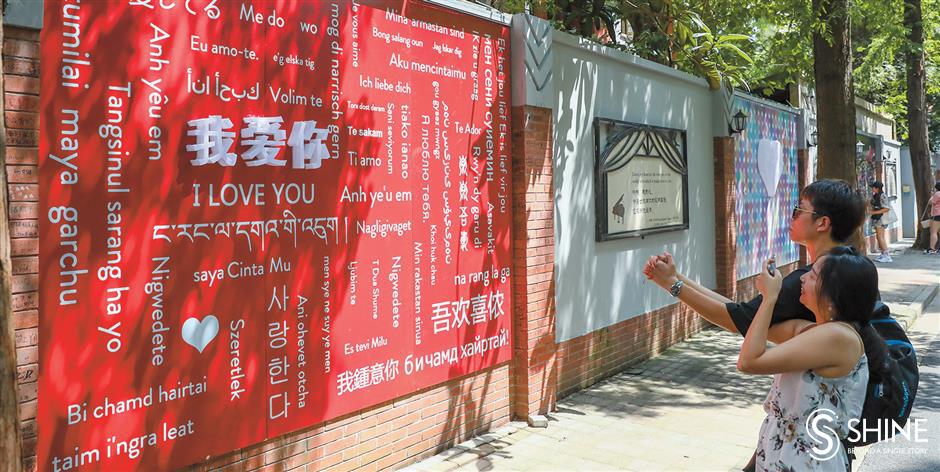 A young couple take pictures of the newly unveiled wall featuring multilingual expressions of “I love you” in Hongkou.

A graffiti wall has been unveiled on the city’s popular “sweet love road” in north down­town to encourage the romantic outpourings of the city’s Rome­os and Juliets.

Tian’ai Road in Hongkou Dis­trict, which translates as “Sweet Love,” has long attracted couples thanks to its name, and also led many to draw their loved one’s initials, as well as hearts, ar­rows, and general declarations of eternal love on walls and buildings.

The designated “graffiti wall” was erected in the middle of the 600-meter-long road on Qixi Festival, or Chinese Valentine’s Day, last Wednesday.

There is also a “wall of love” featuring multilingual expres­sions of “Ilove you,” as well as a “wall of hearts” with a heart-shape lamp for couples to pose in front of.

The graffiti wall aims to keep the road a popular destination for local love birds while sty­mieing scribbled declarations of love that once plagued it, according to the Sichuan Road N. Subdistrict. Red-color pens have been placed beside the wall.

The road has also been adorned with 28 marble plaques of verses by famous poets both in Chinese and English.

More attractions are planned. They include a love museum which will display marriage certificates, wedding photos and traditional dowries from all ages, as well as romantic tales and stories which occurred on the road.

The road is also known for its unusual mailbox. Letters and postcards dropped in the box are sent with a unique heart shape postage stamp.

Many young couples braved the scorching weather on Wednesday to pose in front of the newly unveiled attractions.

Li Chunxiao and Xi Huijun, who met and fell in love on the road, became one of the first couples to pose in front of the wall of love.

“We have witnessed the development of the road, and the road has also witnessed our feelings to each other,” said Li. 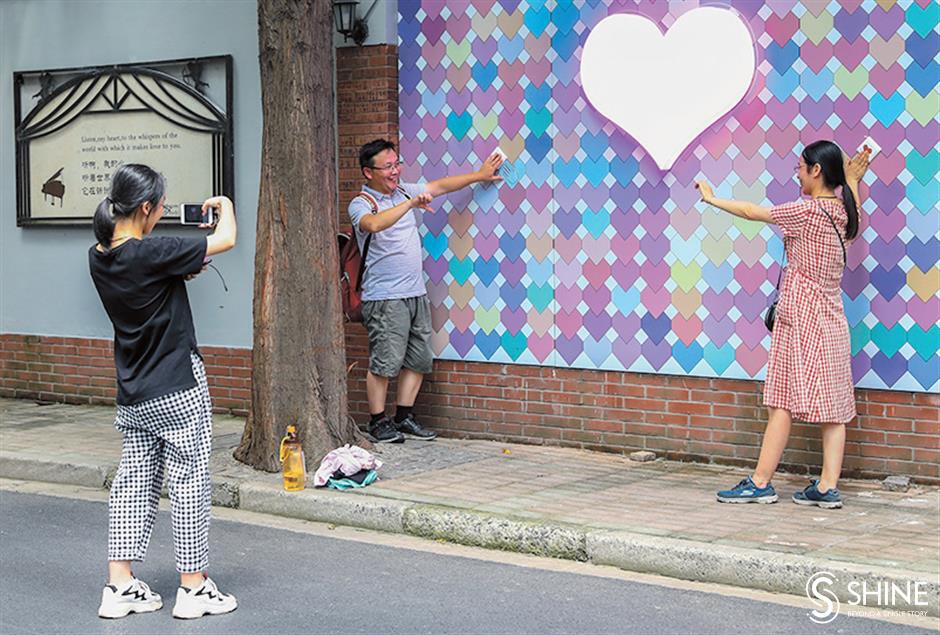 A woman takes a photo of her parents in front of the “wall of hearts.”

Shanghai residents have a long tradition of celebrating Qixi Festival, dating back to the Qing Dynasty (1644-1911), said Xue Liyong, a senior researcher at Shanghai History Museum.

In one of the traditions, women would pray to the Zhinu and Qianniu stars, known as the “stars in love” and then wear a needle and thread under moon­light, Xue said.

Local families also made Qiao cake, or fried dough, to celebrate the festival, he added.

It is also known as the Magpie Festival as in another tradi­tion, on the seventh day of the seventh lunar month magpies form a bridge to unite banished lovers.

The street is nicknamed “the sacred land of love,” mostly because Tian’ai literally means “sweet love.” Abelief has aris­en that young lovers walking down the street hand in hand can keep their love fresh for life.

In the past, people from all over the city would come to the road to scribble or carve messages on the bricks.

The notes ranged from expressions of hopes and feelings, such as finding true love, confessing to unrequited adoration, mending a broken relationship or cursing ex-lovers. Many tour­ists also came to walk along the street, reading messages that conjured up all sorts of emo­tions, both sweet and bitter.

However, the graffiti became so prevalent it was unsightly and the district government sta­tioned security guards as well as volunteers along its length to deter would-be scribes — to no avail.

So it decided to install the official wall. Artists have also been invited to create paintings on it to encourage citizens to write their messages there, rather than disfigure the street.