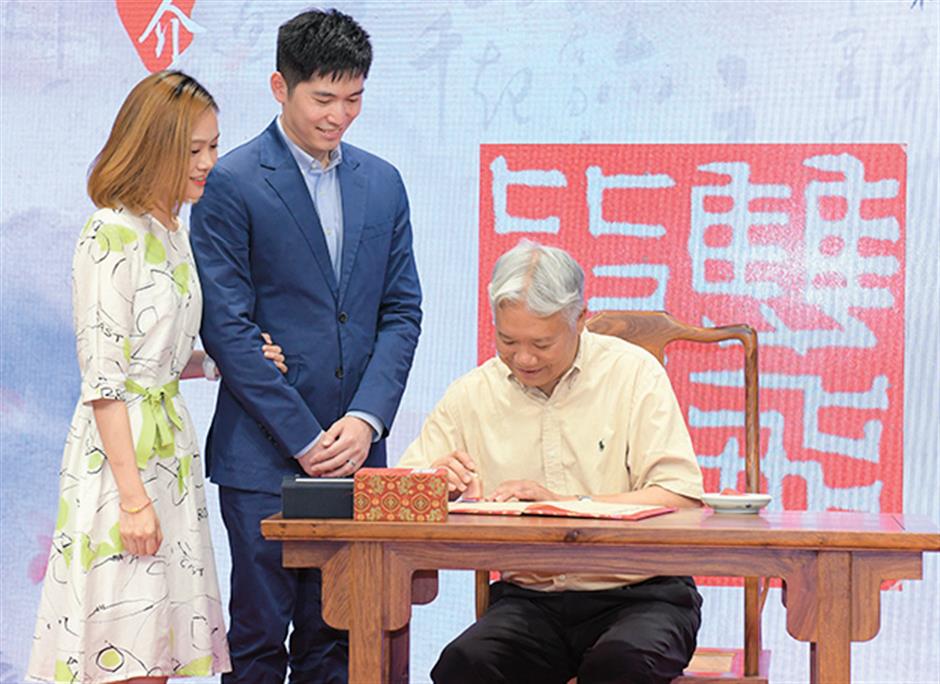 Calligrapher Liu Yiwen (right) presses a seal on a certificate to a newly-wed couple with best wishes for a happy marriage.

The event was held at the Haipai Culture Center within the Sichuan Road N. Park on Qixi Festival.

A competition was also held for romantic poem calligraphy. Winning works were displayed to visitors at the center.

Atotal of 388 people applied to take part in the contest, which attracted more than 600,000 votes and over 3 million online visits.

The 10 best calligraphy works have been selected along with an­other 10 most popular works.

The event was jointly or­ganized by the Shanghai Federation of Literary and Art as well as the publicity depart­ment of the Hongkou District government.

Shanghai’s Haipai Culture Center in Hongkou has become a key site to promote and develop Shanghai-style culture with a number of lectures, exhibitions and other cultural events.

The center, the first of its kind in the city, is intended to become a new cultural landmark, based on the history and culture of Hongkou.

It will drive the inheritance, innovation and prosperity of haipai (Shanghai-style) culture.

Haipai, or the East-meets-West Shanghai style, originated in Shanghai in the 20th century and is often used to describe theater, paintings, novels and architecture with a strong Shanghai angle.

Like the city, Shanghai-style is considered inclusive and diverse.

Hongkou was the birthplace of contemporary haipai culture.

There are 57 historic sites near the cultural center along the commercial road. They include the Memorial Site of the 4th National Congress of the CPC, the League of Leftist Writers Museum and homes of renowned writers and intellec­tuals from early last century.