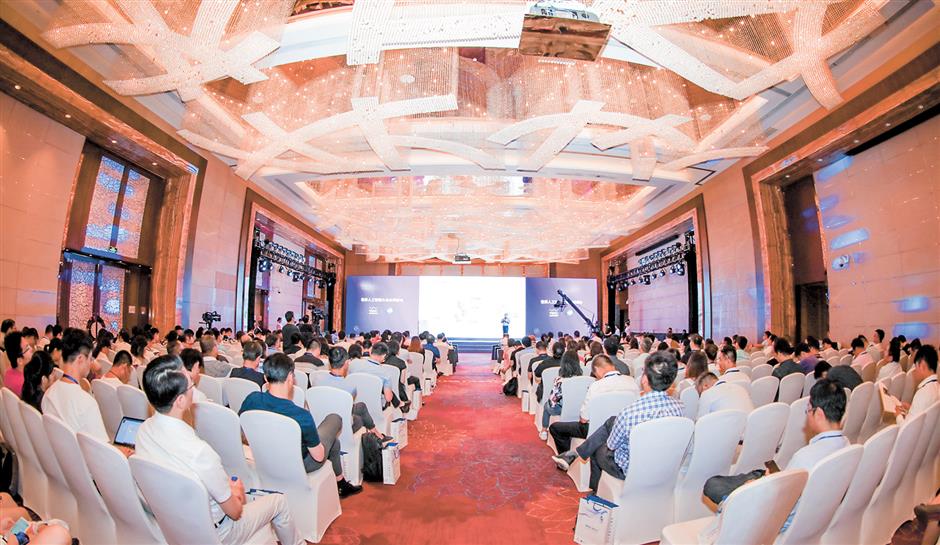 The “Data Driven Universal Intelligence” forum was held last week in Putuo focusing on how AI can promote quality development of the brand economy as well as the evolution, product upgrading and new momentum of AI. The forum, a leading event for the 2019 World Artificial Intelligence Conference, scheduled later this week, attracted 500 global experts and industrial leaders in artificial intelligence.

Nearly 500 global experts and industry leaders in artificial intelligence shared opinions on its development at a forum in Putuo District on August 20.

It was a leading event for the 2019 World Artificial Intelligence Conference, scheduled for August 29-31 in Shanghai.

Titled “Data Driven Universal Intelligence,” the forum focused on how AI can promote quality development of the brand economy as well as the evolution, product upgrading and new momentum of AI.

Keynote speakers included Wu Zhiqiang, vice president of Tongji University and an academician with the Chinese Academy of Engineering, Gerard Tellis, a professor at University of Southern California, Song Zheng, general manager of the Universal Software Park which hosted the forum, as well as the heads of leading local high-tech firms such as DeepBlue Technology and UCloud.

“Shanghai has been increasing its strategic layout in AI since the 2018 World Artificial Intelligence Conference,” Zhang Ying, chief engineer of the Shanghai Commission of Economy and Information, told the forum.

The city has been driving breakthroughs in policy innovation, and launched the nation’s first AI innovative application demonstration zone. The city has brought together all kinds of leading enterprises such as Alibaba, Tencent, Microsoft and Amazon. Local firms such as Yitu Tech, DeepBlue and UCloud are also growing rapidly, Zhang said.

Shanghai has become one of the leading regions for AI development in China, Zhang said. In the next stage, the city will start building a batch of AI research centers and platforms as well as release China’s first AI application development blueprint.

As the organizer of the forum, Putuo has been actively promoting the AI industry. It is developing the city’s first industrial park for Internet security to focus on cyber-security in the industrial sector.

The Shanghai Industrial Internet of Things Security Industry Pilot Park, to be based in the Universal Software Park in Putuo, will gather leading companies from both home and abroad, as well as national research institutes, to boost the city’s cyber-security industry. Furthermore, the China-Israel Innovation Hub (Shanghai) has been launched at the Taopu Smart City in Putuo where China and Israel are stepping up collaboration on scientific innovation.

The first batch of well-known enterprises and institutions, including Israeli incubators Trendlines and StartupEast as well as China’s National Eastern Tech-Transfer Center and PricewaterhouseCoopers, have signed contracts to set up bases in the innovation park, targeted to serve the Yangtze River Delta area and across China.

Scientists from China and Germany plan to carry out joint research in AI and augmented reality at the new AI research platform to drive industry and technology forward.

Through technological cooperation and innovation, the centers will help drive the transformation and upgrading of the manufacturing industry, Putuo District government said.

At the latest forum, the organizer has also initiated a promotion campaign for the SAIL awards of WAIC.

The 2019 SAIL awards will have four categories — the Superior Award to be conferred to the highly praised and welfare-linked program; the Applicative Award for application program for improving social efficiency; the Innovative Award presented to the program that uses the world’s leading technologies in the field; and the Leading Award for pioneering basic theories, methods and models in the AI field.

The foundation will focus on investments in AI, the applications of 5G, company cloud service, the intelligent office and other core parts on the industrial chain of AI.

It aims to discover and promote growth projects to drive the progress and industrialization of AI.