Since the end of March, bilingual officers from the Nanjing Road W. station have visited 29 office buildings in the area.

“What we can offer meets the growing awareness of companies to help their employees get up-to-date safety tips from the police,” said team member Feng Juwei.

Apart from the basics, such as the requirement that all foreigners register with the police within 24 hours of their arrival in China, Feng and his colleagues also give advice on topics of current concern.

These include: How can a woman protect herself from sexual harassment? How to safely ride a taxi hailed on the Internet? How to stay safe when jogging at night? How to prevent credit card theft when on a business trip or traveling?

“For example, we advise credit card holders to smear or cover the 3-digit CVV number on the back of the card so criminals won’t be able to ‘copy’ your card for their use,” Feng said. 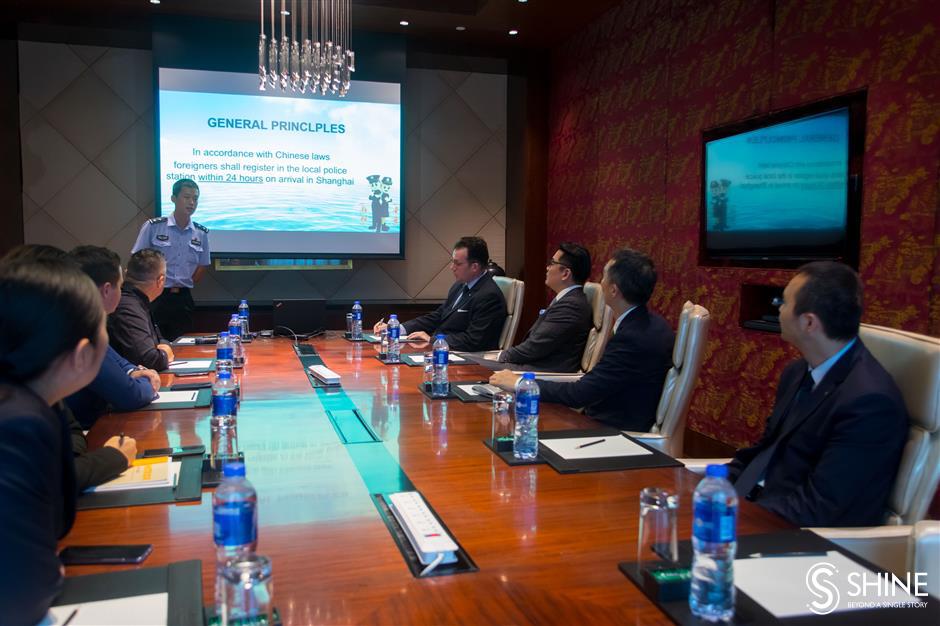 Officer Yu Qijie gives a talk to a group of workers of the Jing'an Shangri-La hotel on Monday.

He said his team is also preparing a talk on how to discover pinhole cameras in hotel rooms — gadgets used by peeping toms that have aroused much public attention.

Team member Yu Qijie, who has a bachelor’s degree in English, can give talks entirely in English.

Earlier this week he spoke to expat and Chinese workers at the Jing’an Shangri-La Hotel.

“Our talks to expats usually include basics of their accommodation registration and work visa issues as well safety tips on how to avoid teahouse or bar scams,” Yu said. “We make the lectures interactive and involving, almost like conversations.” 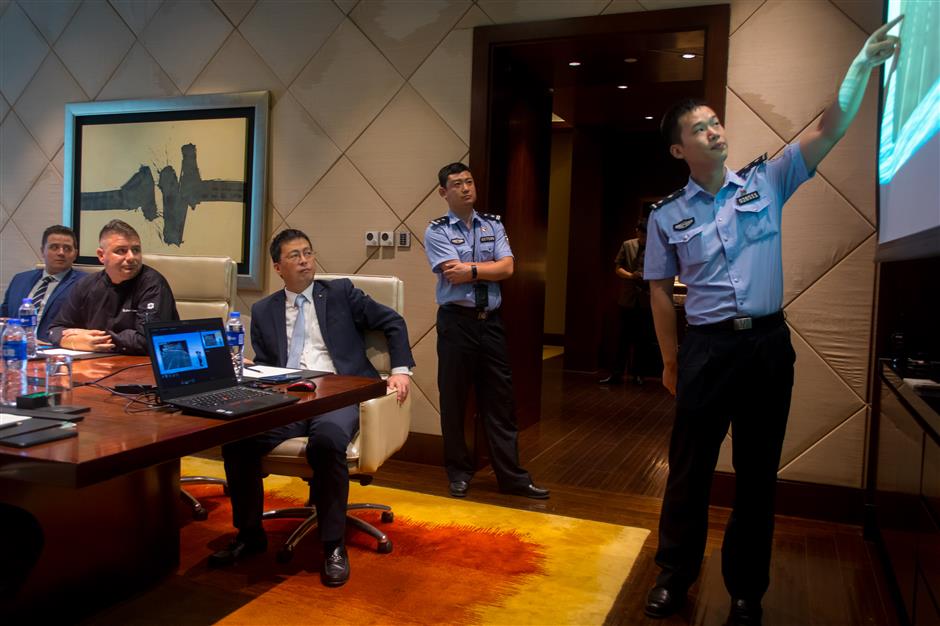 Nicholas Smith, the British general manager at the hotel, welcomes the police talks at his workplace.

“It’s always best to have the police come and give our teams a briefing. Sometimes people can interpret things differently, but when the police share their comments, I think it’s more effective,” he said.

Having lived in Shanghai on and off for 10 years, Smith said the support of the Jing’an District Public Security Bureau to the business was “fantastic.”

“We are very close neighbors and we have been working with them for the past five years to make sure our business is a safe place,” he said.

Emiliano Bernasconi, executive chef at the hotel, also attended the session. The Italian expat has been in Shanghai for almost a year.

“We’ve been instructed on the basics the first day we join the company through our security department, but police can help us learn better,” he said.

Apart from lectures, in cooperation with the district’s legal services, police also hold consultation sessions for office workers in their buildings on Tuesdays and Thursdays.

Safe community for all

Police at the station have also stepped up a crackdown on those who prey on drunk people in bar streets which are the haunts of tourists, expats and locals alike.

To make visitors feel safer, officers in plainclothes have been deployed to the two streets at night to watch out for pickpockets.

On August 18, officers caught one red-handed. The suspect, a man with a backpack who was walking up and down the street without entering any of the bars, inevitably aroused their suspicions. When he knelt down beside an unconscious man near the intersection of Julu Road and Xiangyang Road N. and took a mobile phone from the person's pocket, police caught him before he could flee.

Earlier this year, police also solved a case in which a tourist from Japan claimed that he was introduced by a stranger to a shop where he was blackmailed. Four suspects were caught in May.