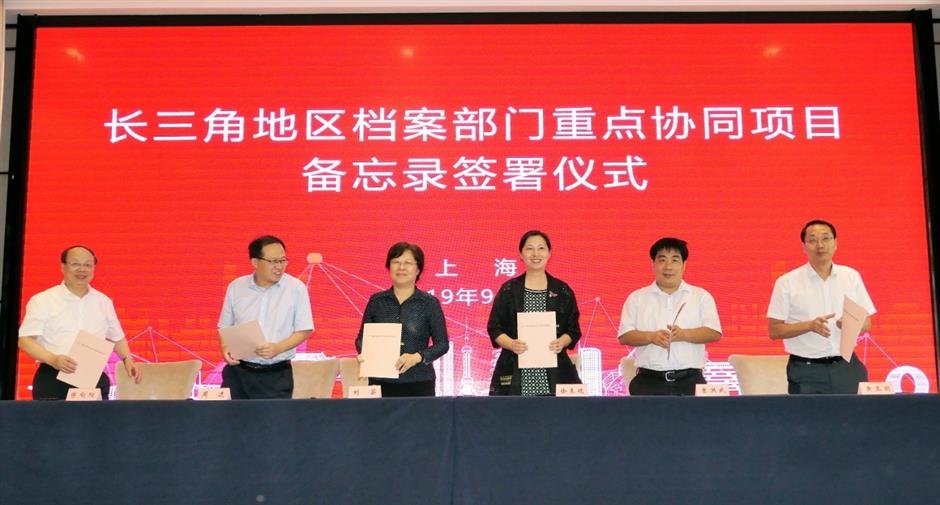 Xu Weiwan (3rd right), curator of the Shanghai Archives at the signing of a memorandum with counterparts in neighboring Jiangsu, Zhejiang and Anhui provinces in Shanghai on Wednesday.

Information from over 300 archives across the Yangtze River Delta are to be made available through an integrated website after a memorandum was signed by Shanghai Archives and its counterparts in neighboring Jiangsu, Zhejiang and Anhui provinces on Wednesday.

The online service, to enable the public to check personal records across provinces and cities, will be initially launched at the “ecological green development demonstration zone” as well as the G60 High-Tech Corridor, two key development zones in the region.

The service will be gradually extended to cover the over 20 cities in the region.

A meeting of the curators of the 345 archives in Shanghai and neighboring provinces will be held annually to ensure progress. An initial symposium of curators was held in Shanghai on Wednesday.

The Yangtze River Delta cities will also cooperate on innovative archive protection technologies and develop culture resources about the history of the Communist Party of China as well as Jiangnan, the area south of the lower reaches of the Yangtze River.

Some 70,000 residents have had access to historical documents at local archives since January this year, a 31.2 percent increase year on year, said Xu Weiwan, curator of the Shanghai Archives.

It signed an agreement with the archives in Jiangsu, Zhejiang and Anhui provinces in March 2018 to allow people check more records at city or district level across the region.

However, the documents needed to be delivered by mail or courier.

An integrated website will make it more convenient for local people to check their personal records from other cities, Shanghai Archives said.

Shanghai's city and district level archives have helped people apply for documents from other cities 186 times since the cooperation was signed.

In one of the latest cases, a woman surnamed Feng living in Jiading District was unable to find her marriage certificate when she was about to apply for a local residence permit early this year. She sent an application through the Jiading archives to its counterpart in Hangzhou’s Xihu District, where she got married, and received her marriage certificate within a week.

More categories of archives will be available for checking this year at Shanghai Archives, the archives of 16 districts and nearby community service centers.

Last year, some 87,000 residents got access to historical documents at local archives, a 42.8 percent increase year on year.