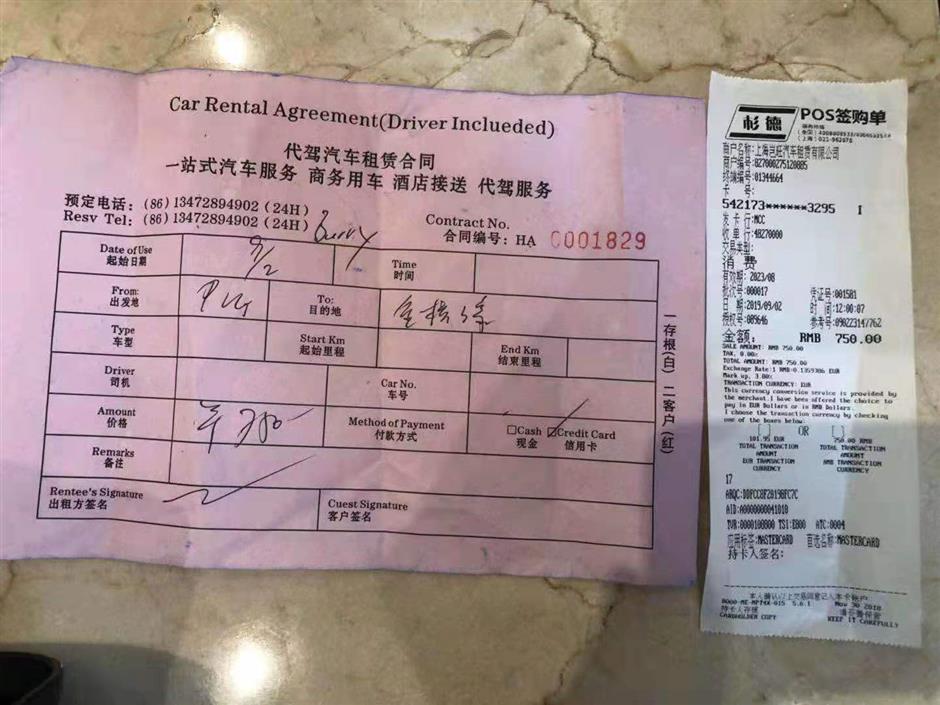 The receipts show Ranjani paid 750 yuan for a "high-end taxi service" taking her from the hotel to the airport.

Two scalpers Shen Chao and Shen Wei, who directed visitors at Pudong International Airport to illegal taxis and rental cars were caught on Friday after an Indian businesswoman reported them to Knews, a local TV news channel.

Ranjani arrived at Shanghai on September 2, but could not find the rental car her company had booked for her, so she decided to find a taxi and was approached by Shen Chao.

“I told him I was going to the Shanghai Marriott Hotel Pudong East,” Ranjani told the TV news. “They told me the price was 750 yuan (US$105).”

On her first visit to Shanghai, Ranjani had no idea whether the price was too high or not.

Ranjani paid the fare with her credit card before the trip.

On arrival at the hotel, the receptionist told Ranjani the normal taxi fare from the airport was only 100 yuan. The pick-up service that the hotel offered was about 300 yuan.

Using the information on Ranjani's credit card receipt, Knews reached car rental company, Qiwang, which a man on the phone described as providing "high-end services," with price not related to distance.

But when officers from traffic authority and police looked into the matter, they found that Qiwang had no license to operate a car rental service. The company was registered by Shen Wei and another man, Sun, in 2017, with capital of 1 million yuan.

While car rental was within the business scope of the company,  regulations state that a company should register their cars with the police before picking up passengers.

“The price would not be a problem if the cars and company were properly registered,” said Zhou Guangyu from the traffic authority. “We cannot interfere in a company's conduct in the market and they are free to charge whatever they like.”

When Shanghai Daily called Qiwang, a company representative refused to give any further comment.

Law enforcement officers told Shanghai Daily the money was returned to Ranjani after the two scalpers were caught. Driver Huang Jun turned herself in.