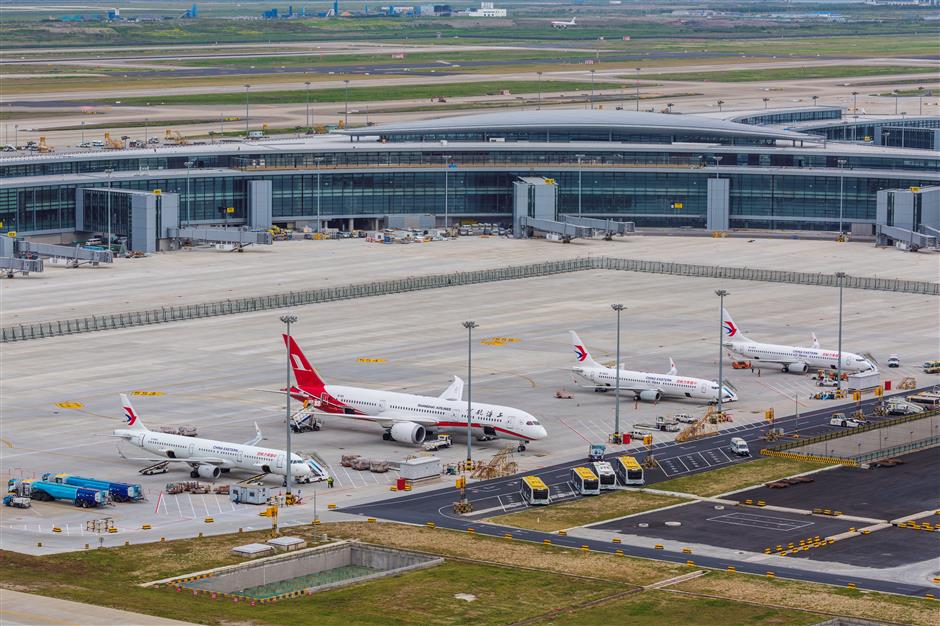 Aircraft berth on apron around the new satellite terminal at the Pudong airport.

Pudong International Airport's new satellite terminal, the world's largest, will open to the public on September 16, the airport's 20th anniversary.

It will expand the capacity of the one of the world’s busiest airports, while improving the flight on-time rate and streamlining transfer procedures.

The core project of the third-phase of the airport's expansion, which began in December 2015, the H-shaped terminal building, known as S1 and S2, covers 620,000 square meters and is about 700 meters from terminals 1 and 2.

Passengers leaving from the satellite terminal will check in at one of the two existing terminal buildings and then take a two and a half minute subway trip to get to the new facility.

Arriving passengers will take the subway to T1 and T2, before receiving entry inspections and picking up luggage. The subway trains run every five minutes. 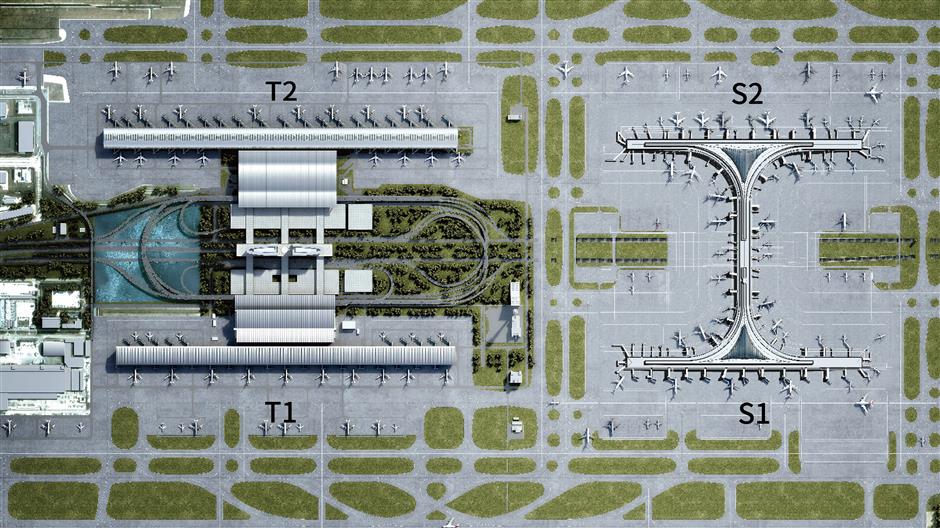 The H-shaped satellite terminal building, known as S1 and S2, covers 620,000 square meters and is about 700 meters from terminals 1 and 2. 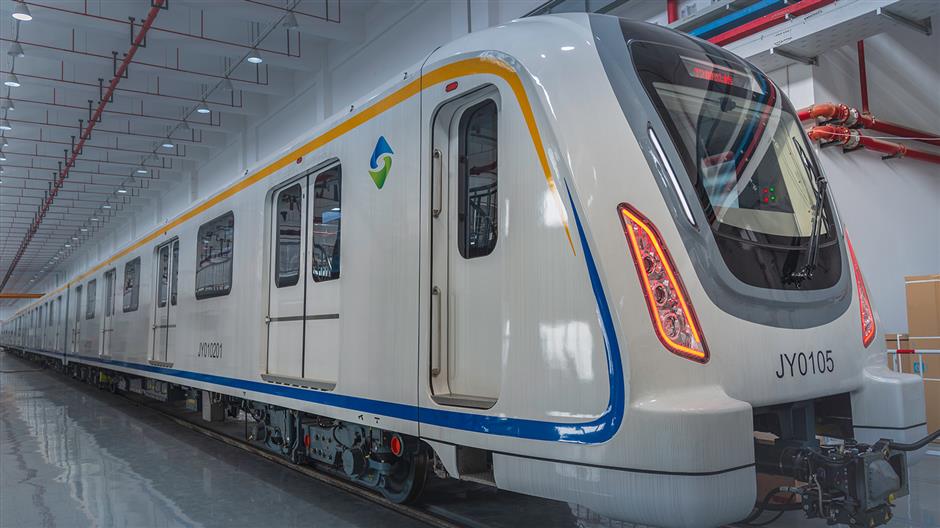 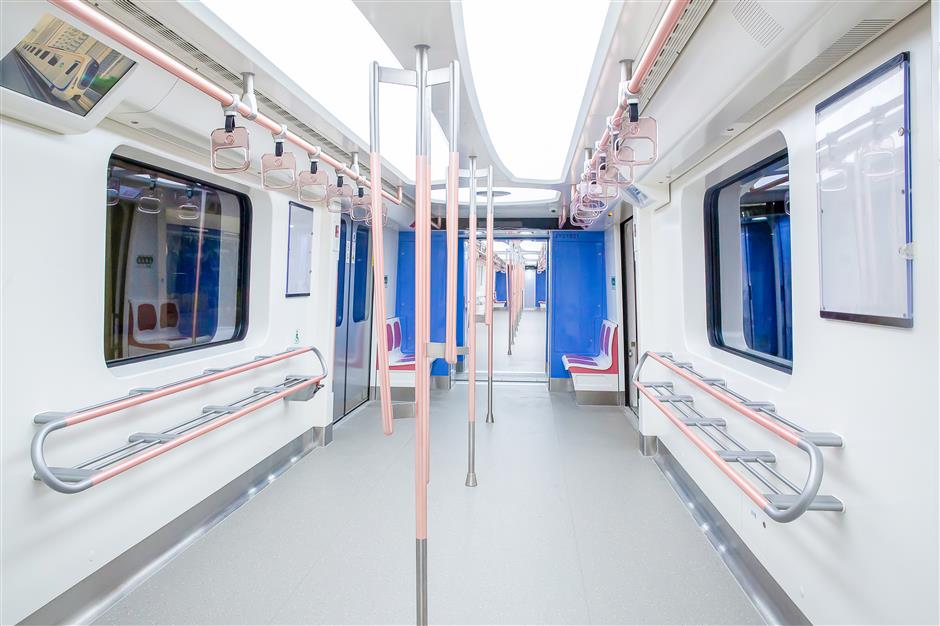 “It will be clear and convenient for passengers to reach the new terminal and get familiar with the new procedure with sufficient guidance and volunteers,” said Feng Xin, president of the Shanghai Airport Authority.

“Fast return routes have also been prepared in case they enter the wrong terminal,” he added.

The satellite terminal has 90 boarding bridges and 125 aprons. Passengers can board over 90 percent of domestic and international flights from terminal buildings directly, rather than take shuttle buses to boarding on tarmac, said Hu Zhihong, general manager with the Pudong airport.

Other new facilities have been built along with the satellite terminal to ensure better punctuality and faster transfers. They include an automated luggage transport system which can handle 5,000 pieces of luggage per hour, additional aprons, taxiways, navigation lighting, a long-term garage, an energy center and other infrastructure. 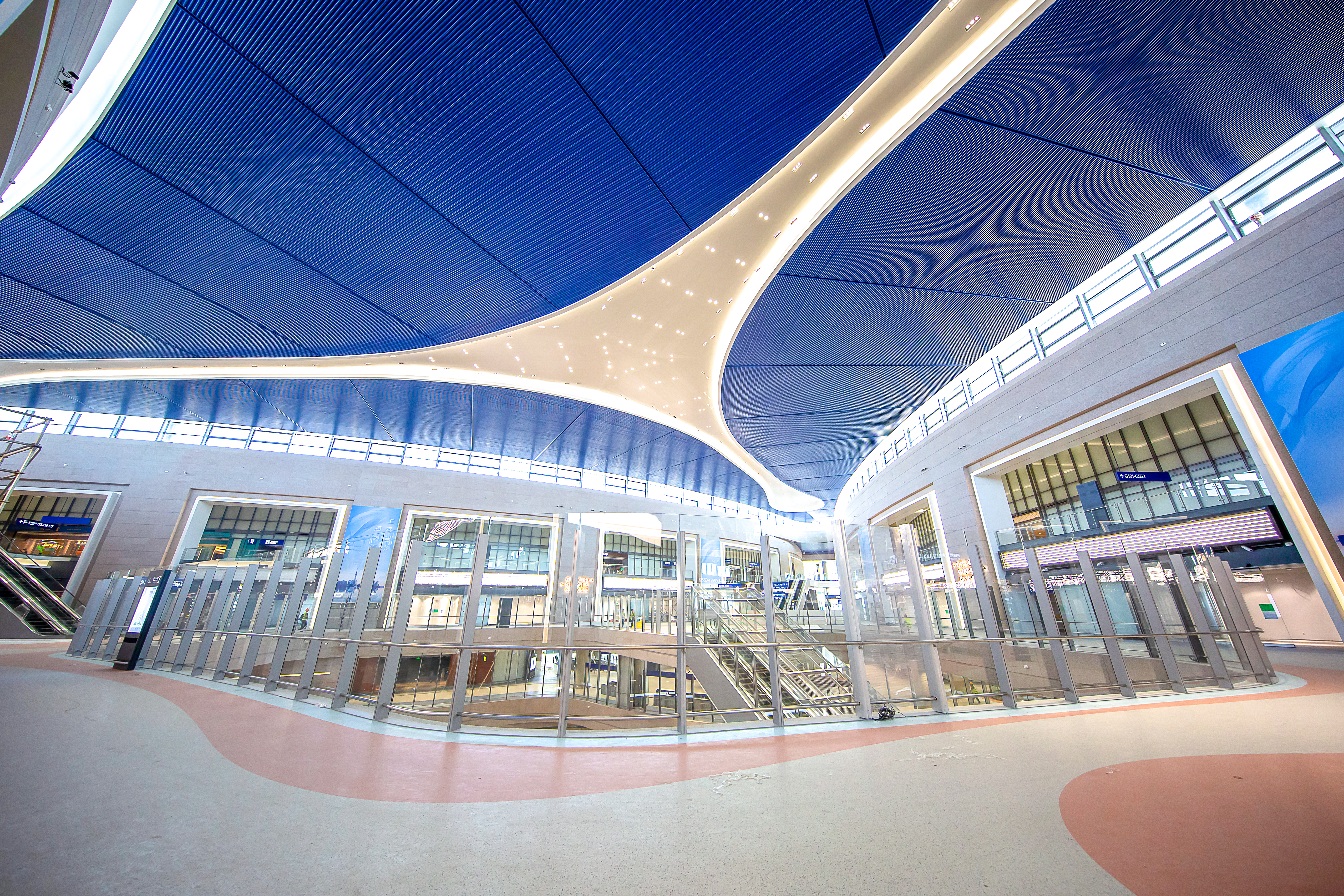 Two tunnel projects have been completed to serve luggage, shuttle and service vehicles between terminals. They’ve largely reduced the taxing distance for airliners and improved punctuality, according to the authority.

The flight on-time rate at Pudong is above 80 percent on average with the new facilities, and there are better communications with the air traffic controller and airlines as well as more precise weather forecasts, Feng said.

Last year, the average flight punctuality at the Pudong airport reached 82.73 percent and that of Hongqiao airport was 89.22 percent, better than most domestic airports, he said.

After the terminal is fully operational, S1 and T1 will mainly serve China Eastern, Shanghai Airlines and other SkyTeam Alliance airlines. It can handle 36.8 million passengers a year.

With the new terminal open, Pudong will be able to handle 80 million passengers a year, 6 million more than last year.

Each train is about 94 meters long with four compartments, two for domestic flight passengers and two for international travelers. They have screens for flight information and luggage racks. 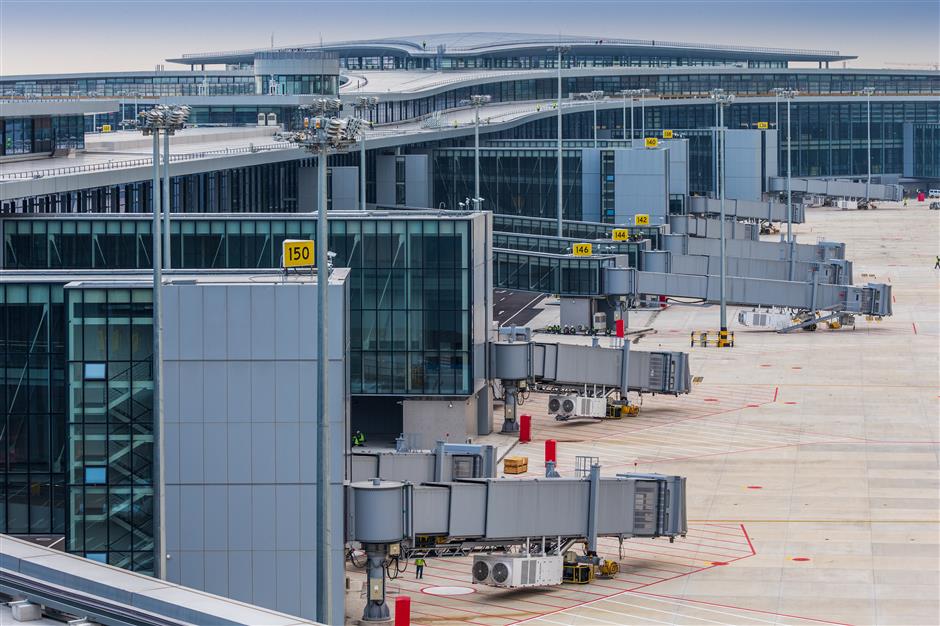 The boarding gates at the new satellite terminal 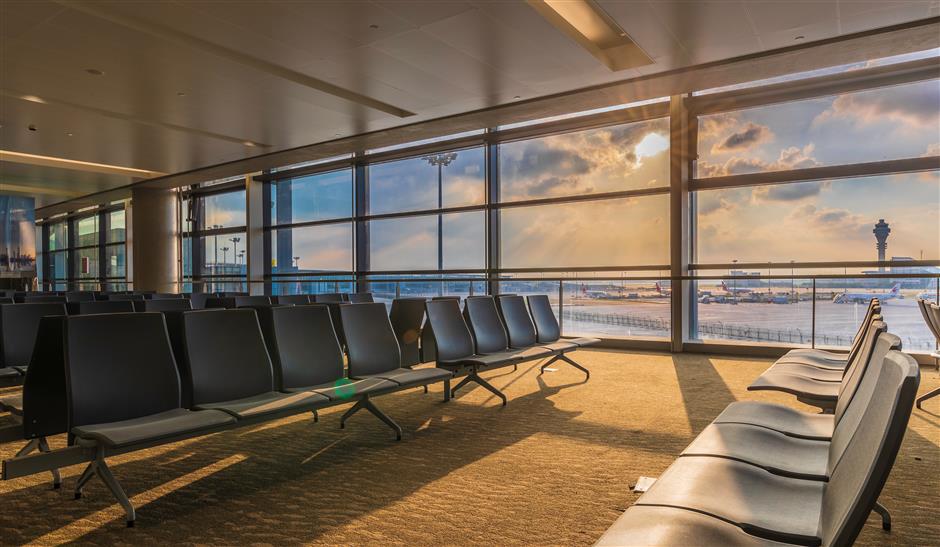 The wide sightseeing glass curtain wall at the satellite terminal

Passengers will feel more comfortable at the new terminal, Feng said. The S1 follows the blue hue of T1, while S2 is decorated with yellow like T2. Various chairs and sofas have been prepared for passengers, along with Internet sections and wireless charging facilities.

“More international duty-free brands will open at the new terminal to meet the demands of an international mega airport,” Feng said.

The satellite terminal also features energy saving designs, which can save some 9 million kwh of electricity, 216,000 tons of water, 1,600 tons of diesel from support vehicles and cut carbon dioxide emissions by 115,000 tons annually.

Shanghai's two airports have become overburdened with passengers and cargo. Together they handled over 117 million passengers in 2018, making Shanghai the world’s fifth-busiest air hub after London, New York, Tokyo and Atlanta.

A series of expansions and renovations, including the building of the satellite terminal and a three-year renovation of Terminal 1 at Hongqiao are helping to make services more efficient.

Meanwhile, a 68.6-kilometer express line to connect Pudong and Hongqiao airports will start operation in 2024 to shorten the traveling time between the two airports to less than 40 minutes, said Xie Feng, director of the Shanghai Transportation Commission.

An aerial look at the satellite terminal at the Pudong airport