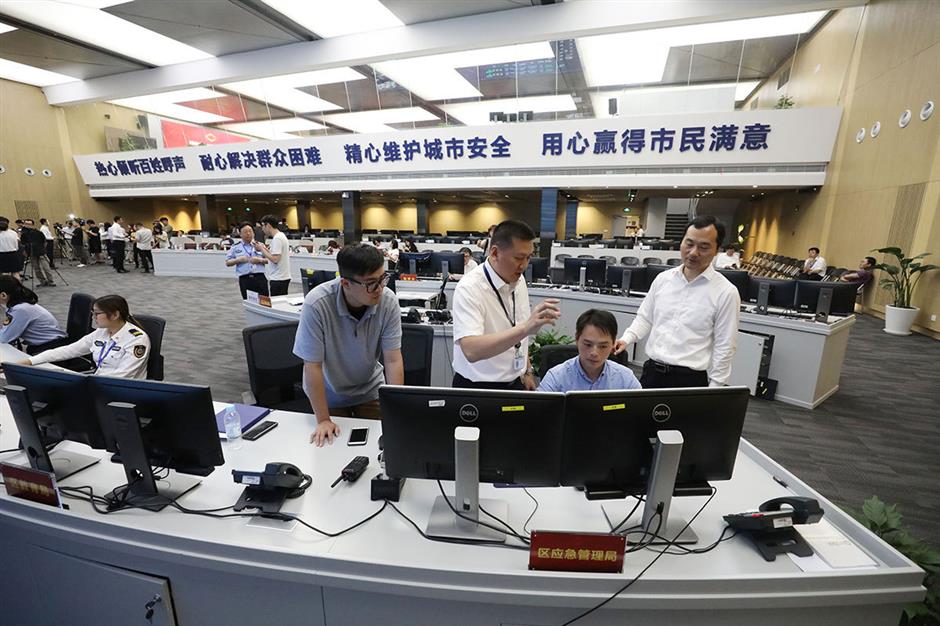 In Zhoupu Town, on the rural-urban fringe in Shanghai's Pudong New Area, the management of public facilities has been advanced by a database that has been running since earlier this year.

Instead of manually checking the status of facilities, supervisors will be alerted by pop-up information on their mobile phones if facilities need maintenance, whenever they are within 5 meters of the facilities.

"It substantially bolsters work efficiency," said Wu Bei, deputy director of the urban management Zhoupu subcenter, which was established in 2018.

The public facility database is one of 11 aspects of city management, including transportation, garbage sorting and more, that can be monitored at the subcenter through an online platform based on cloud computing, big data and artificial intelligence.

In Pudong, 36 such sub-centers have been built and connected with the central urban management center, launched in 2017, with the aim of upgrading the comprehensive ability of urban management through the application of modern information technology.

Xi also stressed the need for careful urban management in Shanghai during his meeting with the Shanghai delegation of the National People's Congress in March 2017. He urged the delegates to "develop a new path of social management that fits the megacity's characteristics" and "city management should be done as carefully as 'doing embroidery'".

Working as a city brain, the central center's data show its online management system has connected with 341 working systems in Pudong, including public security, city administration and environmental protection departments.

About 40,000 sensing devices linked to the system are available to monitor the district in real time. A total of 11.8 petabytes of city data have been utilized so far.

According to Wang Lei, deputy director of the emergency management department in Pudong New Area, management content is categorized into 60 scenarios in the system, such as bus route optimization, noise control and flood prevention. The department is in charge of the central center operation.

In terms of truck management, Chen Gang from the command office of the center said 24-hour probes have been set up on roads used by construction trucks.

"If any infraction is observed, the system immediately sends the truck's information to corresponding supervising systems, such as law enforcement departments and the operation agencies of the trucks, without any redundant communication between each sector," Chen said.

Over 30 irregularities involving construction trucks were recorded on an average day when the system was launched in 2017. Official data reported only two cases in August.

"People are just behaving much better than ever before," he added.

"If gas leaks and smoke occurs, or the elderly person remains motionless for a long time, the sensor will signal the local neighborhood committee where staff members will be sent to assess the situation. Emergencies will be automatically reported to the subcenter and central center," said Wang Bo, director of the subcenter.

Currently, the service has benefited those aged over 65 in two neighborhoods since June 2018.

Since technology has changed the way people work, Wang Lei emphasized how important people are to the process, regardless of their backgrounds.

"Professionals in multiple domains are always in demand to refine the city management systems," he said. "Officials who stay on top of problems should cooperate with each other and take on the responsibility of effective supervision and law enforcement."