Carried away by teachers' devotion 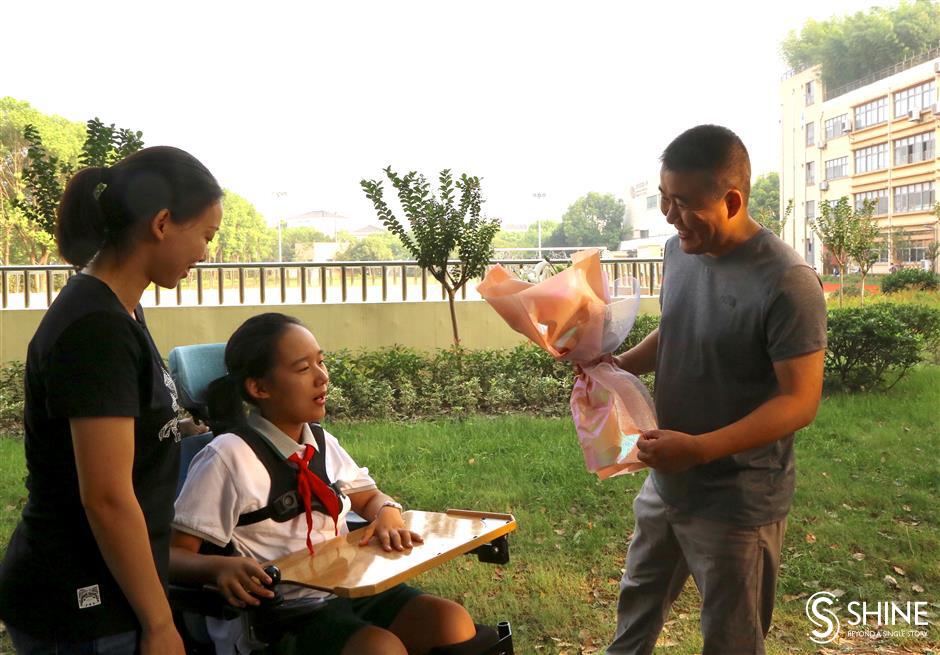 Zhang Yilin and her mother talk to Zhou Aifeng about her new middle school life after extending her best wishes for the teacher on Teachers’ Day.

Zhang Yilin graduated from the Chuncheng campus of Minhang Experimental Primary School in June, but she returned on Tuesday, the 35th Teachers’ Day, to express her gratitude to the teachers who had carried her upstairs and downstairs over the past three years.

At the school gate, she presented a bunch of flowers to Zhou Aifeng, one of the teachers, wishing him a happy Teachers’ Day, and talked to him about her middle school life.

Zhang was diagnosed with spinal muscular atrophy when she was 2 years old, a condition leading to progressive loss of leg and arm functions.

“We found she was not as good as other children at learning to walk when she was 1 year old, and when the genetic tests showed she had spinal muscular atrophy, I felt it was the end of the world,” said her mother, Lu Yunjin.

But her parents were determined she would enjoy the same life as her peers as much as possible. Lu has been with her at kindergarten and school, carrying her into and out of the classrooms and helping her with other daily needs.

This wasn't too difficult when she was in kindergarten or lower grades in primary school as she was not that heavy and the classrooms were on the first floor.

But when she entered third grade, her classroom was on the second floor, and there was no lift in the building. Lu couldn't carry her up and down the stairs.

Zhou Aifeng, a teacher and deputy director of the school’s administrative affairs office, came to her aid.

From September 1, 2016, Zhou waited at the first floor almost every morning to pick Zhang up, walk upstairs and put her in her wheelchair in the classroom. When school was over, Zhou was waiting to take her down.

When Zhou was busy or absent, his colleague Xu Yunqing stepped in.

When Zhang became a fifth-grader, her classroom was on the fifth floor and another two school faculty members, Wu Chengshan and Song Zaili, joined them. Zhang weighed nearly 40 kilograms and her muscles had deteriorated, so the task was much more difficult.

Sometimes, they had have to move her to other rooms for different lessons, such as for music. So the teachers had to carry her up and down several times a day. 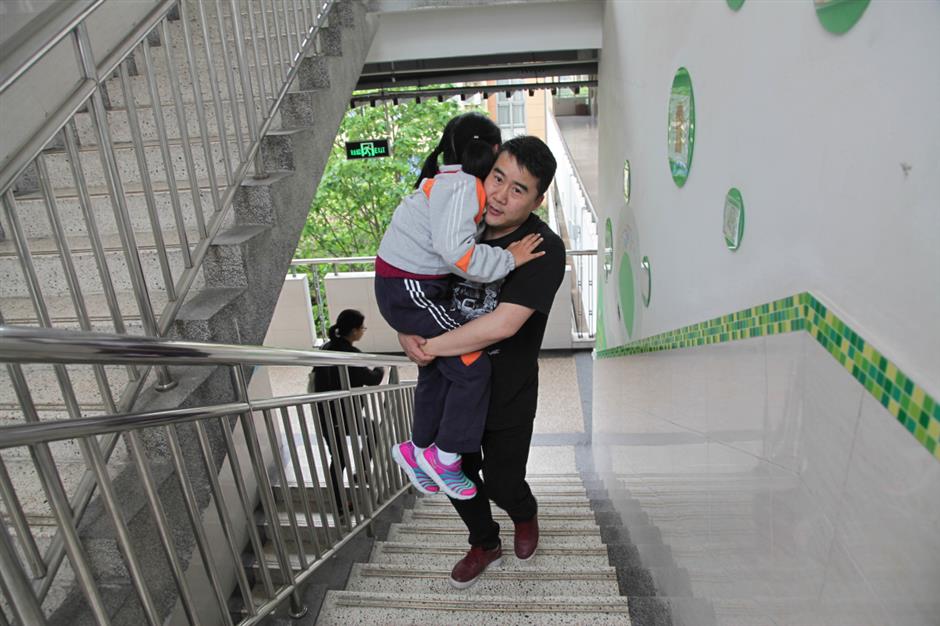 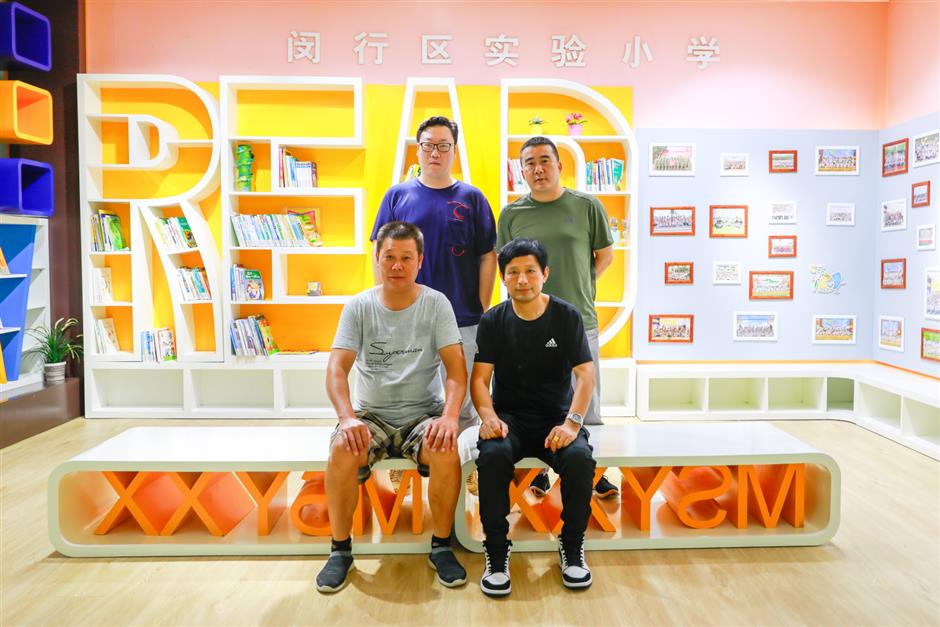 The four faculty members at the Chuncheng campus of Minhang Experimental Primary School who carried Zhang upstairs and downstairs over the past three years.

“I remember clearly that they needed to climb 104 stairs to the fifth floor. I know it’s strenuous as they were tired and out of breath after carrying me upstairs,” she said. “I’m grateful from the bottom of my heart.”

Zhou said: “Although suffering from the rare disease, the girl has been eager to learn and has been performing well, we are glad that we could help her."

Her mother said she would like to thank the whole school as they not only helped her with moving her daughter, but also allowed her to use empty libraries and lab rooms when the girl was having classes.

“The teachers were also very kind and her classmates were helpful in everything from collecting homework to fetching lunch for her,” Lu said. 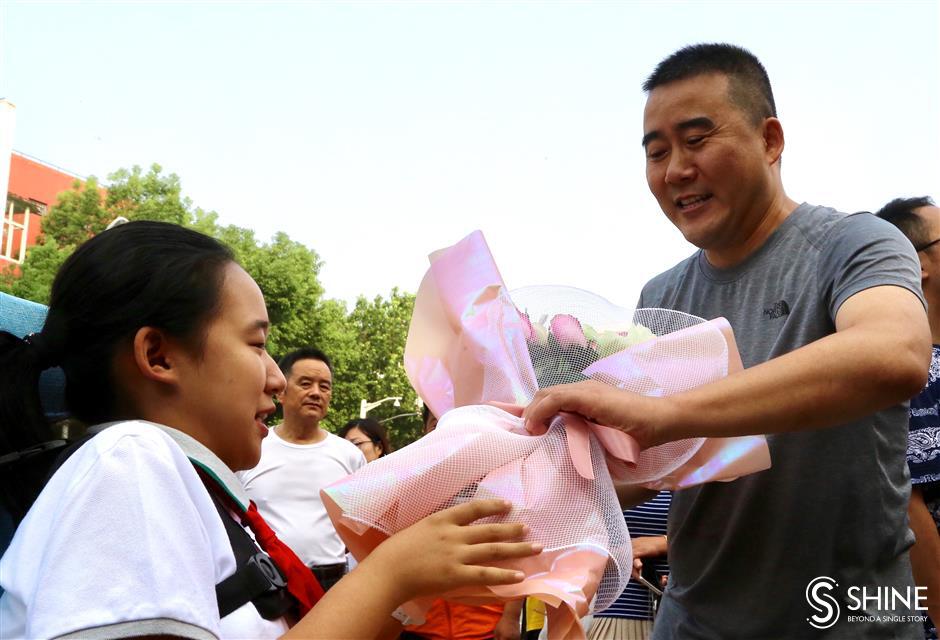 Zhang Yilin presents a bunch of flowers to Zhou Aifeng.

Such kindness from the primary school did not end when Zhang graduated. The school contacted Xinsong Middle School to tell them about her condition, asking them to make arrangements for her.

Ding Shuyan, vice principal the middle school, said they arranged for her to be in a classroom on the first floor closest to the school gate and the toilet. Security guards would put out temporary ramps  for her wheelchair every time she arrived at the school or left for home.

There is also a designated area for Lu to put the wheelchair and she can use a meeting room with air conditioner and a computer while her daughter is having classes.

A special corner has been set up with a curtain in the toilet and a cleaner helps Lu when she has to tend to her daughter.

“The school is very considerate as my daughter is growing up and cares more about privacy,” Lu said. “They have also told me there were special exam rooms and time extension for city or national level tests for students like my daughter and helped me to apply. I’m sure she will have a good time here in the following four years.” 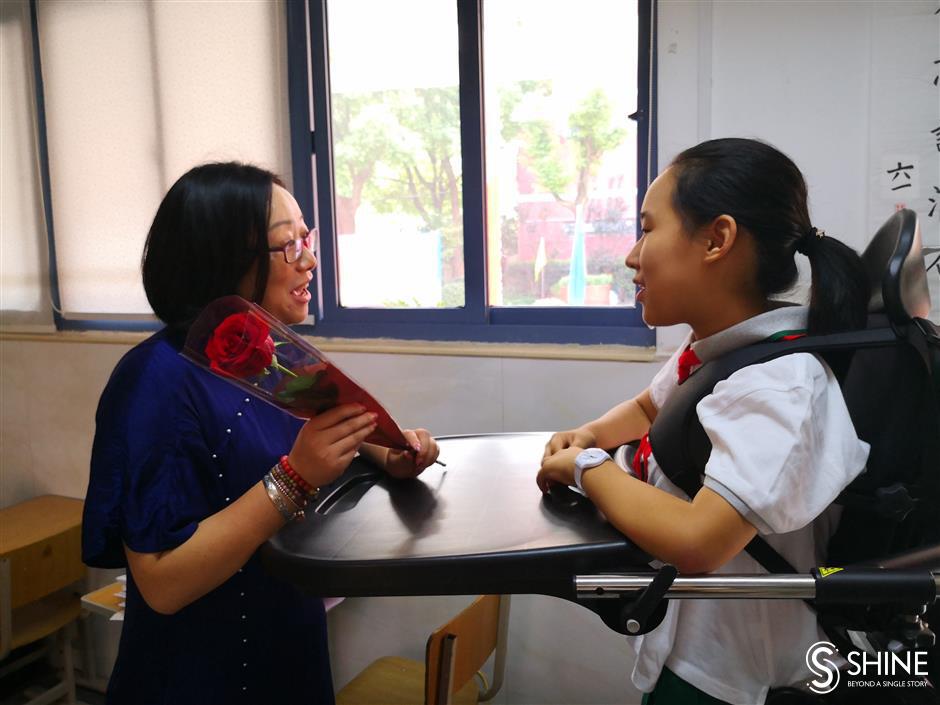