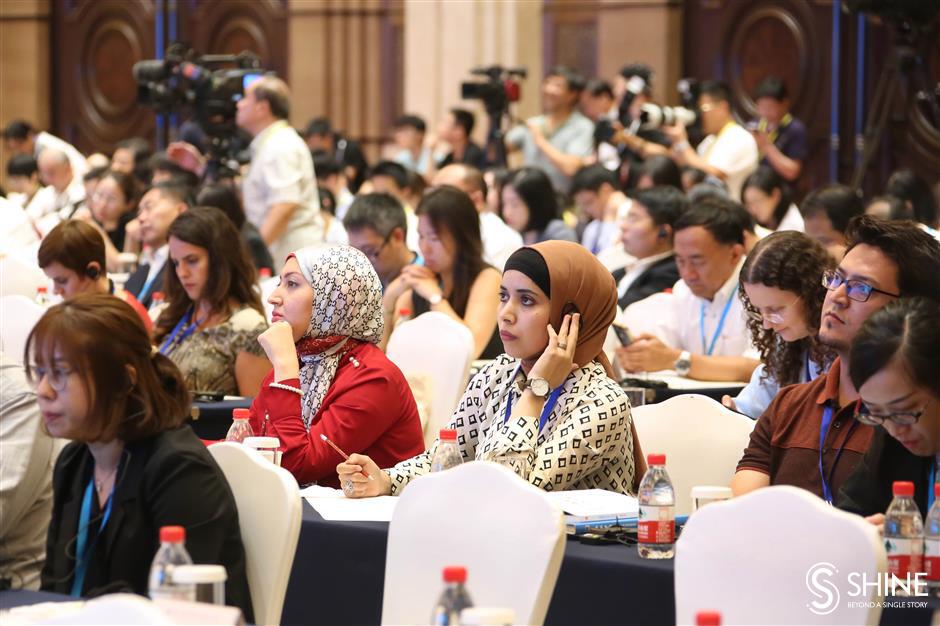 More than 300 scholars and opinion leaders from home and abroad attended the 8th World Forum on China Studies on Tuesday.

China’s development and success over the past 70 years have been a result of its close, evolving links with the world, according to a high-profile forum that opened in Shanghai yesterday.

More than 300 scholars and opinion leaders from home and abroad attended the 8th World Forum on China Studies, a biennial intellectual event that will run till today.

In his opening remarks, Shanghai Party secretary Li Qiang said this year’s forum is appropriately themed “China and the World: Progressing Together over 70 Years,” as the country will celebrate its 70th anniversary in about two weeks.

“Seventy years may not be long in the annals of human history or the Chinese race, but the changes that took place in this period have profoundly changed the destiny of China and its people,” Li said.

Observers of the so-called “Chinese miracle” need to look no further than Pudong New Area, which underwent a complete makeover from a swath of rice paddies 29 years ago into a thriving modern financial hub teeming with skyscrapers.

Since China’s top leadership mapped out its blueprint for Pudong in 1990; now its annual economic output has expanded from a mere 6 billion yuan (US$860 million) to top 1 trillion yuan as of last year, a jump of 166 times.

Li noted that traditional theories attributing China’s success to demographic dividends, reform incentives and other factors are only partially correct, as the fundamental force underlying the Chinese economy comes down to the leadership of the Communist Party of China. With doctrines such as scientific development and commitment to stability, meritocracy and people-centric principles, China has managed to weather tough times and maintained its vitality, Li noted.

The Shanghai Party chief encouraged global thinkers to contribute to the continued development of China. “Great theories lend force to great practices, and great practices lead to great development,” said Li. “Shanghai and China today are eager for the wisdom of outside thinkers.”

Former prime minister of the Czech Republic Jiri Paroubek recalled his multiple visits to China when in office and as opposition leader in the central European country.

As a front-row witness of China’s growing economic ties with other countries, Paroubek observed that China’s economic success in terms of higher standards of living have shown the attractiveness of its model.

China’s economic clout has grown in tandem with its deepening involvement with the global financial and trade system. A typical example is the Belt and Road Initiative proposed by President Xi Jinping in 2013. To date China has allocated tens of billions of dollars in the project, helping to improve the livelihoods of people along Belt and Road countries. “What’s good for the people is good for the country; for this reason, I see it (the initiative) only as positive,” Paroubek said.

Despite some groundless criticisms circulated in Western media about BRI, it stands as an open, cosmopolitan initiative, said Huang Kunming, Head of the Publicity Department of the CPC Central Committee.

He said China will never impose its growth model on others. Instead, the BRI is an effort to deliver a bigger share of the growing Chinese economic pie to its intended beneficiaries, foreign or domestic.

Six years since its inception, the BRI has evolved into a gigantic platform for global cooperation and become “one of the most welcome global public goods,” said Huang.

His claims are backed up by numbers. The volume of trade going in and out of countries along the Belt and Road amounted to US$6 trillion by the end of 2018, accounting for 27 percent of the world’s total trade.

The opening ceremony of the forum was followed by the presentation of the Award for Outstanding Contributions to China Studies. This year, four China scholars were honored. They include Nicholas Platt, President Emeritus of Asia Society, Hamashita Takeshi, Research Department Head of Japan’s Toyo Bunko, Kristofer Schipper, member of the Royal Netherlands Academy of Sciences, and Tu Weiming, Professor and Director of the Institute for Advanced Humanistic Studies at Peking University.

The two-day forum also consists of a number of panels and roundtables on BRI, China’s reform and opening-up in globalization, and socialism with Chinese characteristics.