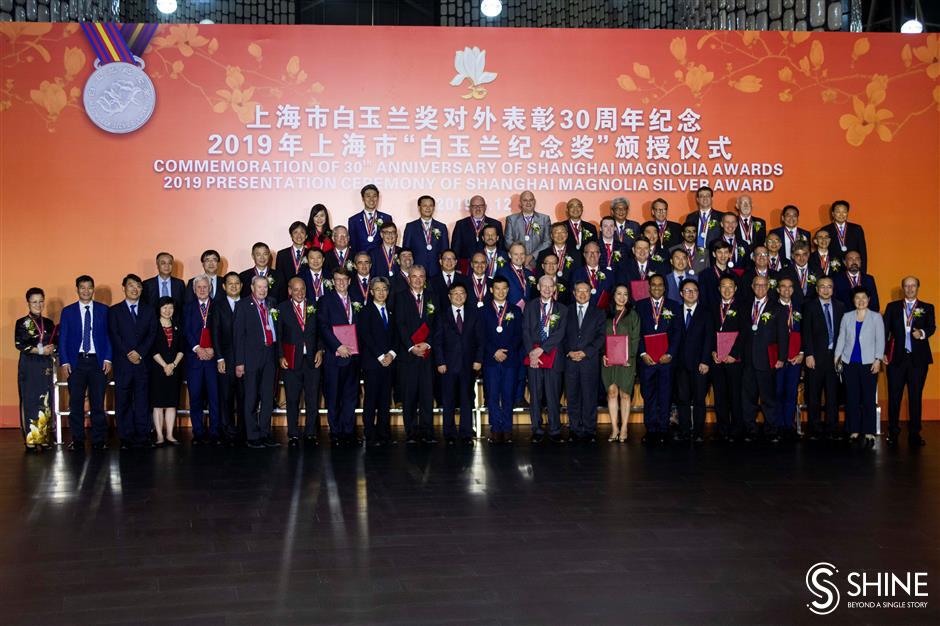 Fifty-eight people from 18 countries and regions were given the Magnolia Silver Award yesterday in recognition of their contribution to Shanghai’s development.

Those honored include senior managers of companies, such as adidas, L’Oréal China, Schaeffler Group and Dassault Systèmes, as well as scientists, artists, educators and a football coach.

Their contributions have injected vitality into the city and built bridges for Shanghai with the rest of the world, creating opportunities for its development, Zhang Xiaosong, director-general of the city foreign affairs office, said at the awarding ceremony.

Since 1989, Shanghai has successively used the Magnolia Silver Award, Magnolia Gold Award and Honorary Citizenship to honor foreigners for their contribution to the city, one of the most dynamic and rapidly growing in the world.

In the past 30 years, a total of 1,216 expats have received silver awards, according to Zhang.

“On behalf of the Shanghai people and the government, I would like to extend our gratitude to every winner of the award for the wisdom and hard work you have contributed to the development of Shanghai, we will always remember the contribution you have made,” he said.

“Our city is now dedicated in building itself into a global center for science and technology, and a world hub for finance, trade and shipping, promoting its brand in manufacturing, shopping, culture and service and accelerating the integrated high-quality development in the Yangtze River Delta Region,” he said.

“Making Shanghai an innovative, humane and ecological city is our shared wish.

“I hope that all the winners here will gather more people to join hands in building and witnessing a brighter future for Shanghai.”

Kevin Bogardus, general manager of Chubb Insurance and who has been in Shanghai for more than 17 years, said he felt honored to win the award.

“I love this city, it is my home,” he said. “I’ve spent more time here than in any other place in the world. It’s a pretty much international city for people from everywhere. The city, the government and the people are all very welcoming. It’s vibrant and safe. It’s a great place to raise your families.”

He is satisfied with the company’s development in the past seven years as it’s now not only here in Shanghai, but has also expanded into Beijing Guangzhou, Wuhan, Chengdu and Shenzhen. Since it registered in the Pudong New Area in 2005, its revenue had grown by 11 times in 10 years and now has more than 200 partners, serving over 5,000 companies and paying taxes over 100 million yuan each year.

The company has also established partnership with key industries in the city and in China, such as the aviation, automobile and marines.

“From the perspective of the company, I like Shanghai for the young generation and for the capacity of local universities that ensure we have the right people with right skill,” he said.

“Everything moves fast here and every time you have something to do. I like the dynamic and passion.”

Ivan Ruvidic-Michaux, an associate professor of the school of humanities at Shanghai Normal University who has been living in Shanghai for 12 years and dedicated in drama performance, also praised Shanghai for its dynamic for all kinds of arts.

“People in Shanghai now wants to discover new things, not only theater performance or movie, it’s a paradise for artists to be in Shanghai,” he said.

Rashid Qureshi, Chairman and CEO of Nestlé China, said that the award was not only his personal honor, but also the recognition of Nestlé.

“The connection between Nestlé and China has lasted more than a hundred year and will be continued and deepened with the further opening up of China market,” he said.

A charity concert was also staged by the Shanghai City Symphony Orchestra to raise money for autistic children after the awarding ceremony. 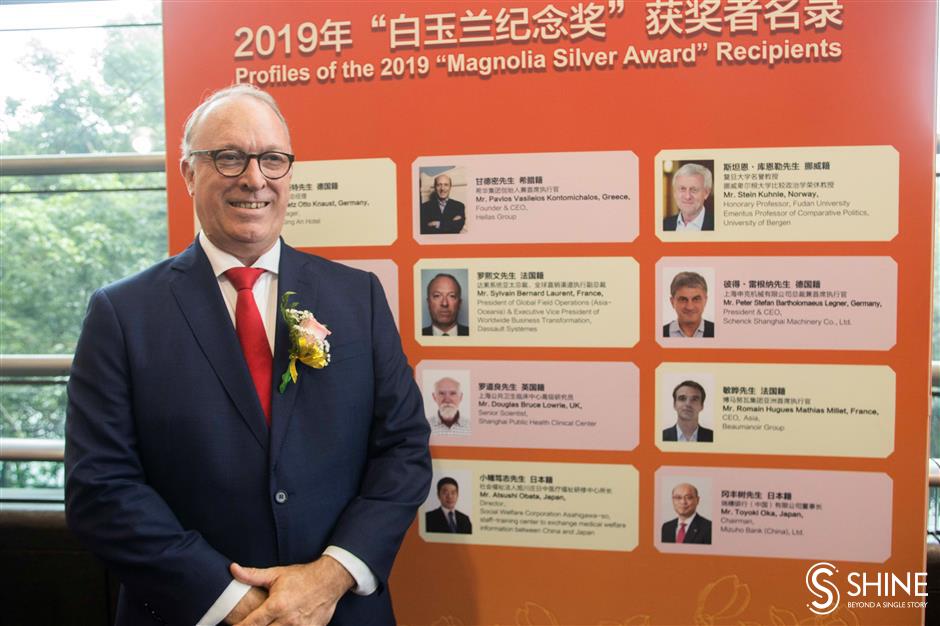 Sylvain Bernard Laurent, president of Global Field Operations (Asia-Oceania) Dassault Systèmes, takes a picture with a board with his name and photo.