New schools for students as their semester begins

Education is a major support for the core competitiveness of Jiading, Lu Fangzhou, director of the district, said at an opening ceremony, adding that the district will be doing its best to promote the healthy and allround development of students.

Jiading New Town Experimental Primary School will join with Penglai Road No. 2 Primary School in downtown Huangpu District in implementing the star education courses of the latter. Parents of the students at the Jiading school expressed their support of the philosophy of “letting you foresee the future in childhood.”

The new Jiading New Town Experimental Primary School will develop a new series of courses with the name of “new town” with Penglai Road No. 2 Primary School, aiming to cultivate a habit, an interest and a vision for students in practice.

The school will also set up mini courses in philosophy, Chinese, math and English to assist the children’s everyday studies.

Students in the newly opened Jiading New Town Experimental High School have the chance to join STEM courses from Datong Junior High School in Huangpu District. Huangpu, with its rich education resources, plans to send 10 experts in course setup and research to provide guidance for the new school.

students on September 1. The school will be offering courses for students from grade one to nine in the future. In the school, there are libraries, laboratories, drama spaces and 17 classrooms for special lessons, including drama, painting and calligraphy, traditional Chinese studies.

Districtwide, primary and middle school students witnessed the opening of the new 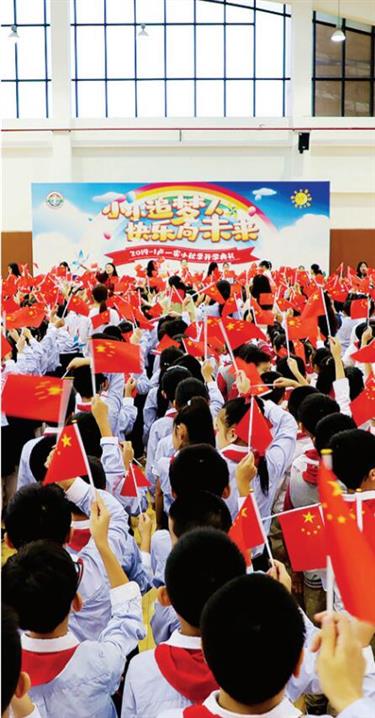 Pupils at the Luwan No. 1 Central Experiment School wave national flags as they celebrate the opening of the autumn semester on September 2.