Bravery wins the day as typhoon blows in 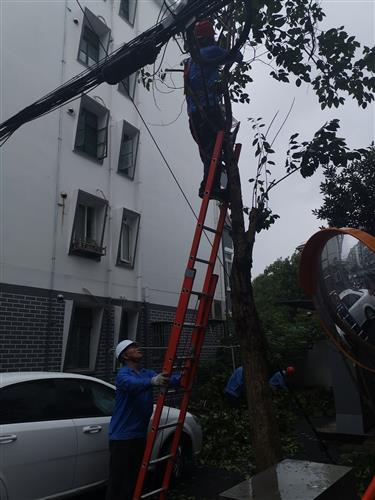 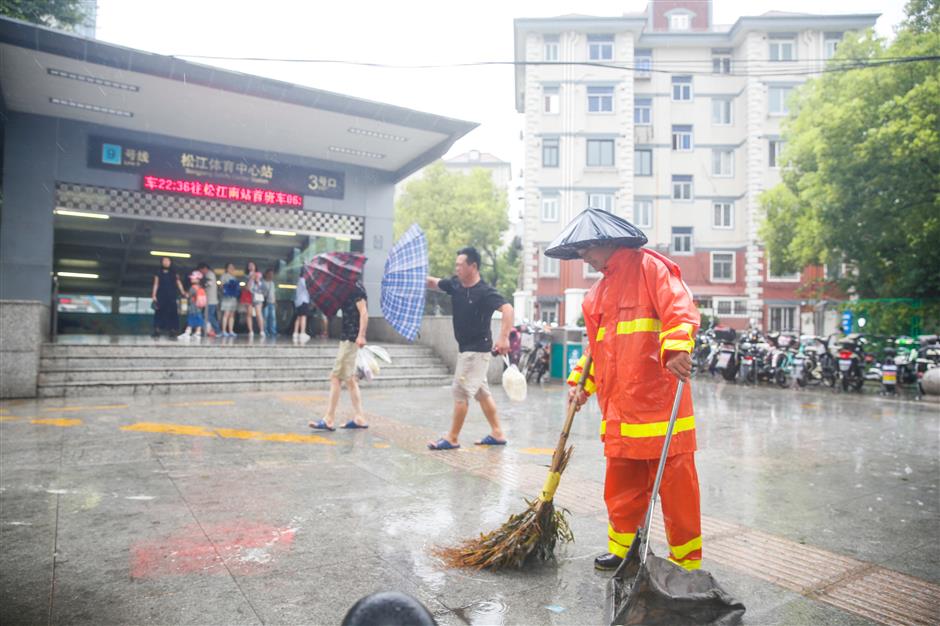 A cleaner sweeps ground on the day typhoon Lekima struck the city.

When super typhoon Lekima swept eastern China in early August, a group of people in Songjiang faced up to the challenge of safeguarding life and property. The following is a review of how these ordinary people behaved extraordinarily when they resisted the storm.

Getting farmers out of danger

Jinglingqiao Village in Yexie Town is a cluster of nursery gardens and flower bases. Farmers, worried about their plants, would feel reluctant to move even when faced by natural disasters such as typhoon.

During typhoon season last year, Gui Jingjing, Party secretary of Jinglingqiao Village, and her colleagues were persuading farmers to relocate well into the early hours of the morning. Farmers, believing a typhoon would never hit Shanghai severely, didn’t take her seriously.

So she decided to take “iron-hand” action this year.

Gui visited managers of various planting bases and signed urgent relocation agreements with them before typhoon Lekima approached on August 9. In the agreements, farmers were asked to leave before 4pm, otherwise managers would cut electricity to force them to move. Managers, if they didn’t fulfil their duties properly, would risk losing their renewal contracts next year.

The majority of farmers working at the bases were living in make-do sheds built of galvanized-steel boards. In addition, they had their children with them as it was summer vacation time.

“People’s life safety weighs against anything. Faced with natural disasters, I will take every measure possible to ensure their safety,” said Gui.

With her efforts, more than 300 farmers at the planting bases transferred successfully.

To avoid anyone being left behind, Gui and her colleagues took turns to patrol the place.

And to ensure the relocated people had board and lodging, Gui and her colleagues used their village committee offices to make way for them.

Gales blew and torrential rain kept falling at 2pm on August 10. A tall camphor tree near the east gate of the Shixianyuan residential area of the Fangsong Community was surrounded by a group of people who were fortifying the tree. Among them were Wang Fei, head of New Forest Property Management Co, and his colleagues.

Wang’s eyes were red and bloodshot for working nonstop the night before and his clothes were soaked through.

Throughout the night of August 9, the raging typhoon had blown down four trees. Wang and his colleagues reacted immediately in spite of the bad weather.

A villa area, the green coverage rate of Shixianyuan residential area amounts to over 50 percent with the majority of the trees growing large and densely. Rows of camphor trees stand on both sides of three main thoroughfares near the east gate. Some are quite near residential houses and high-voltage cables.

“We actually trimmed some branches and fortified some trees before the approaching of the typhoon. In spite of this, quite a few trees were blown down this time,” said Wang. “To reduce accidents, one silly but effective solution was to guard the residential area around the clock and be aware of potential safety hazards there at any time.”

Working round the clock

A call reached the Songjiang flood-prevention headquarters on August 10, informing staff members of water-logging under the overpass of the G60 Kungang Highway due to drainage pump that stopped working because of a power failure.

On receiving the call, the flood control office issued instructions to the district’s power supply company and the water works bureau.

With urgent repairs, the pump resumed its function at 3pm. Flood prevention work actually started on August 8. Staff members of the district’s flood control office were on duty throughout the following nights.

“Our task is to find risks and react to them in time before danger arrives, and scientifically organize our personnel and use the emergency resources to ensure life and property safety of our people,” said Fei Xin, a staff member with the district’s flood control office.

Three phones at the office rang constantly. Its staff members took records while answering the phones. Within hours, dozens of phone calls had reached the office.

The members stuck to their posts throughout the night. Some didn’t go home and some resumed work after a little nap in the office.

Besides landline orders, emergency reports from the 12345 public service hotline reached members through their cellphones.

“We are multitasking. No emergency call or order should be overlooked,” said a staff member.

The rain eased at 3pm on August 10. Staff members then started to collect statistics about the damage in 18 of its communities, towns and economic development zones.

Statistics were updated about where a tree fell down, where an electricity cable broke down and where water-logging was forming.

As long as the wind blew and the rain poured down, statistics were updated and emergency staff dispatched.

Firefighters without a safety rope

A solar water heater on the roof of No. 453, Tuanjie Village in Yexie Town was overturned by typhoon Lekima and hanging dangerously at noon on August 10.

Upon receiving an emergency call, the fire and rescue squadron of Yexie Town dispatched firefighters to the scene.

It was a two-story farmhouse with a small rooftop space and no anchoring point for a safety rope.

The overturned heater was swaying on the roof and was about to fall down at any moment.

“We’ll climb on the roof first and the rest of you wait at the balcony on the second floor,” Gu Binlian and Shen Shunyi, both firefighters at the squadron, told their colleagues.

They then set up a ladder and climbed onto the roof without the protection of a safety rope.

They finally dismantled the heater. After fastening it with a rope, they passed it to their colleagues on the balcony.

“We didn’t have the protection of a safety rope just now, so we could only bear against each other when we were on the roof,” said Gu and Shen after they climbed down to the ground.