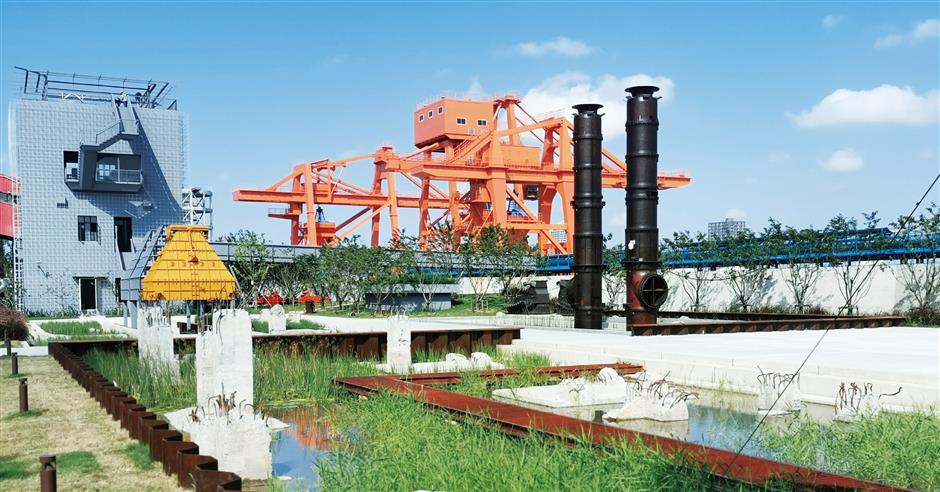 A footpath along Huangpu River stretches eastward in Yangpu District to complete a 5.5-kilometer promenade for joggers and cyclists.

The river bank twists and turns to give way to a historical past and yet nurtures the future and birth of innovation. The 2.7 kilometers of public space to the east of Yangpu Bridge is now open.

As part of the Binjiang Scenery Belt, which passes through five Shanghai districts, Yangpu has emphasized transforming its waterfront area into an ecological landscape.

Industrial relics, left at the former site of Shanghai Power Plant’s Yangpu Wharf, such as cranes, are now part of the landscape.

The narrow piece of land along the Huangpu River has been recognized as one of the cradles of China’s modern industry and once home to several of China’s earliest industries — many of them dating back over 100 years.

UNESCO experts consider it to be the world’s largest riverside industrial belt and it is defined as a central activities district in the Shanghai Urban Master Plan (2016-2035).

The previously closed riverside industrial hub is now an open and shared waterfront with historical accumulation and intelligent management, and is ecologically friendly.

Along the southern segment of the waterfront path, people can witness public spaces and industrial relics on the riverbank renovated into platforms for cultural exhibitions, sports and leisure.

The former sites of a power station auxiliary equipment manufacturer, a cotton mill, a soap factory and the iconic Yangshupu gas plant and power plant are surrounded by air filled with a strong industrial wind now.

Eastward from Yangpu Bridge, the first stop is the ruin of a once 17,000-squaremeter Shanghai Power Station Auxiliary Machine Factory (the former Yangshupu Workshop of Anderson Meyers & Co) at 2200 Yangshupu Road.

It was founded in 1921 and after that became the largest power station auxiliary equipment manufacturer with the most varied products throughout the country.

A change of history

A tunnel-shaped leisure space built near the landmark chimney of the former Yangshupu Power Plant.

The century-old workshop survived a change of the history.

The trusses and cranes are retained. Huge industrial buildings scattered around make people feel as if they have traveled back in time amid an extremely shocking visual impact.

The next stop is the former soap factory, which has become an experience center of soap production.

The Shanghai Soap Factory was formerly known as China Soap Ltd, founded by Unilever, at the beginning of the 20th century.

An exhibition hall based on the previous sewage pool is now displaying the history of the factory, traditional manufacturing process and the once bestselling product series. Visitors may also enjoy a cup of coffee with different flavor here.

The former No. 12 National Cotton Factory integrates the concept of “textile” into its layout.

Newly planted shrubs constitute an interesting labyrinth, creating a public space of “green weaving, waterfront maze.” Visitors may feel like passing through a time tunnel weaved by the passing of time.

The Yangshupu Power Plant was formerly known as Shanghai Electric Company built in 1882, which was the first such business in China and one of the earliest power plants in the world. In 1893, it was acquired by Shanghai Municipal Council.

Twenty years after the acquisition, a new plant was launched. By 1923, it had become the biggest coal-fired power plant in the Far East.

Its 105-meter-tall chimney featured the highest building in China, proudly trumpeting the success of Shanghai’s industrialization.

The plant played a major role in the modern industrial history of China.

Many revolutionists, such as the martyr Wang Xiaohe, once worked here. Wang, a leader of a workers’ movement, sacrificed his life days ahead of the liberalization of the city.

In front of the power generation workshop on the wharf, a tower crane, ash tank, coal conveyance stack and pump pit are well preserved, together with various industrial relics around. A cultural complex in the workshop now occupies the commanding height in the area.

Floodwalls have been moved backward to make way for the best waterfront view. Every inch of space is carefully designed. Here is a collection of design firms from home and abroad, dozens of excellent designers competing together, different ideas colliding and merging, to produce brilliant works. 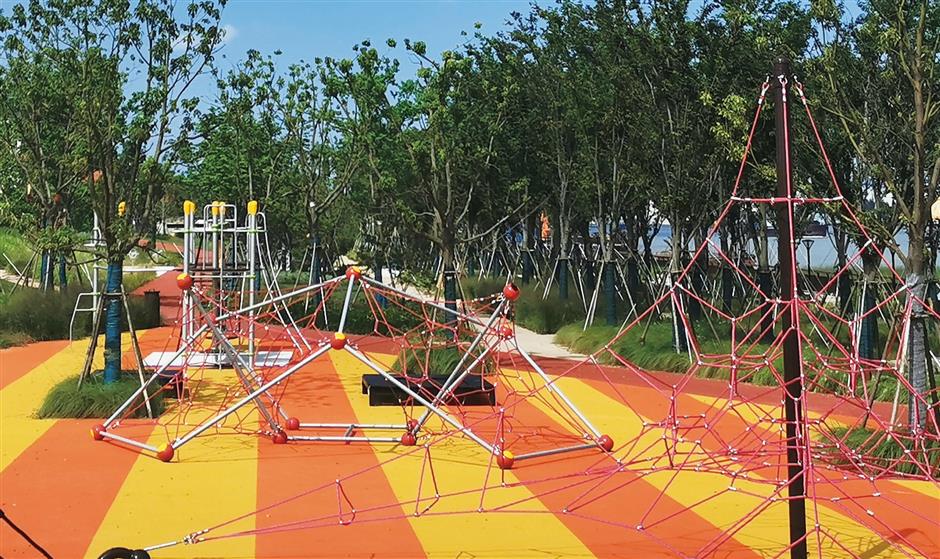 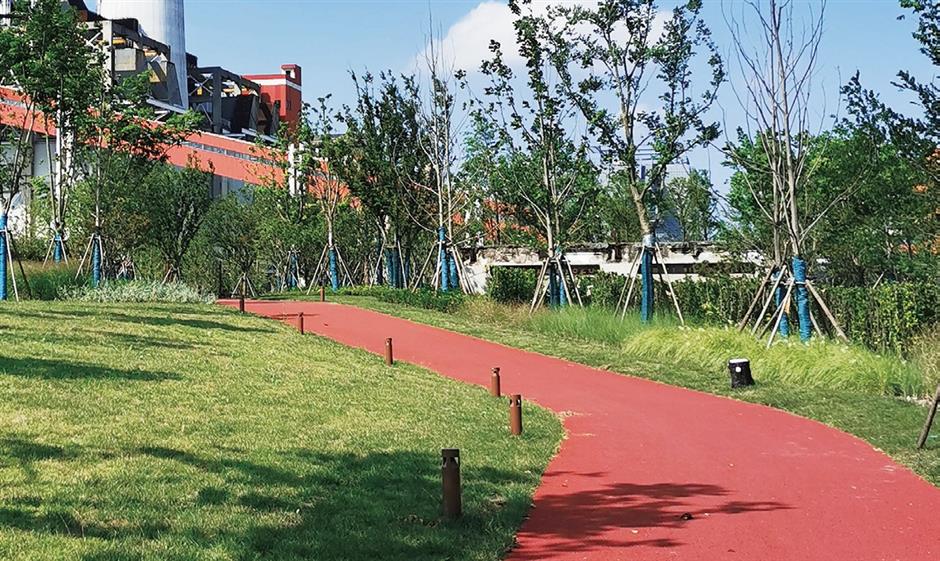 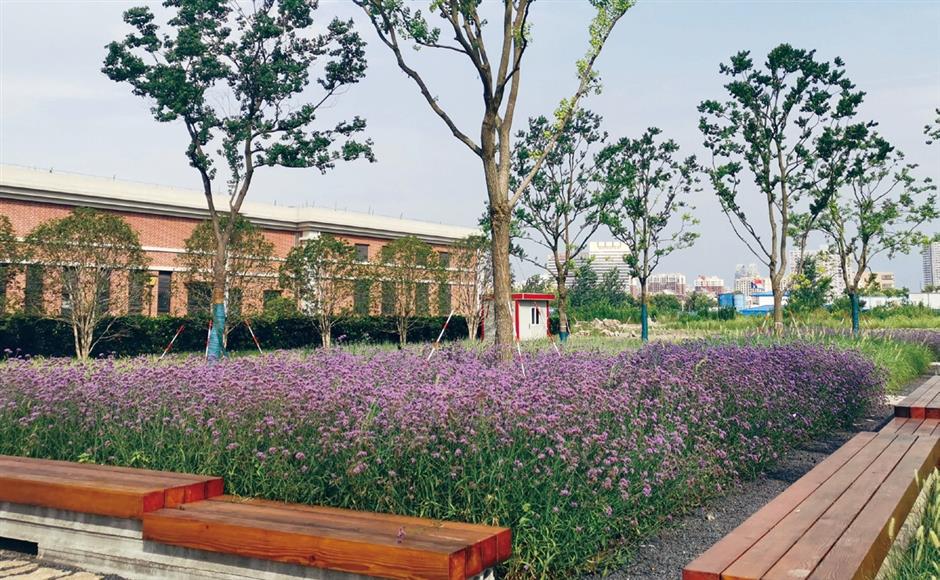 At the same time, Yangpu is hosting the “Shanghai Urban Space Art Season 2019,” and 20 artists from 11 countries and regions in the world have been invited to create permanent public works of art in Yangpu’s Binjiang area.

The 2.7 kilometers of promenade has a green space of 120,000 square meters. Hundreds of trees and shrubs were planted, featuring rare species, such as Blue Ice Arizona Cypress, Cast Iron Plant and Blue Snowflake.

The southern segment is also equipped with outdoor sports and recreational facilities, such as tennis and basketball courts, a beach volleyball court, skateboard ground, roller skating rink and climbing wall.

Meanwhile, an intelligent Binjiang command center has been put into operation together with the Binjiang management platform to overview the area in a smart way.

The 2.8-kilometer riverside area in Yangpu that has opened to the public since 2017