Extra buses brought in to carry record number of tourists

The cruises and shuttle boats on the Huangpu River carried over 317,000 passengers on the first three days of the National Day break, the marine safety administration of Huangpu District said on Friday.

Because of Typhoon Mitag, the passenger flow only surged from October 2. More than 130,000 people boarded shuttle boats and cruises on October 3 alone, which set a new record.

The dense passenger flows have put 30 percent more traffic on the river, the administration said.

The first 105 minutes after the first sightseeing cruise began operating on October 3 alone saw numbers exceed 3,500. By the end of the day, over 43,000 people took cruise tours, 30 percent more than last year.

Meanwhile, many passengers also flooded to the Bund on Thursday night for the light show, which will last until October 6. By 6pm on Thursday, there were over 180,000 people walking along Zhongshan Road.

Because the East Nanjing Road Station of Metro Lines 2 and 10 were closed from the afternoon and the Bund was under traffic control, bus route 71 became the only means of public transportation to take the visitors out of the area.

At 10pm, the line waiting at the terminal station of route 71 stretched out for more than 100 meters. Officers from Jiushi Bus Group and volunteers rushed to the station to help maintain order.

The bus company originally allocated six extra buses on the day, which turned out to be insufficient. Another six buses that had already clocked off for the day were called in, all in all helping take 70 extra runs on the route. 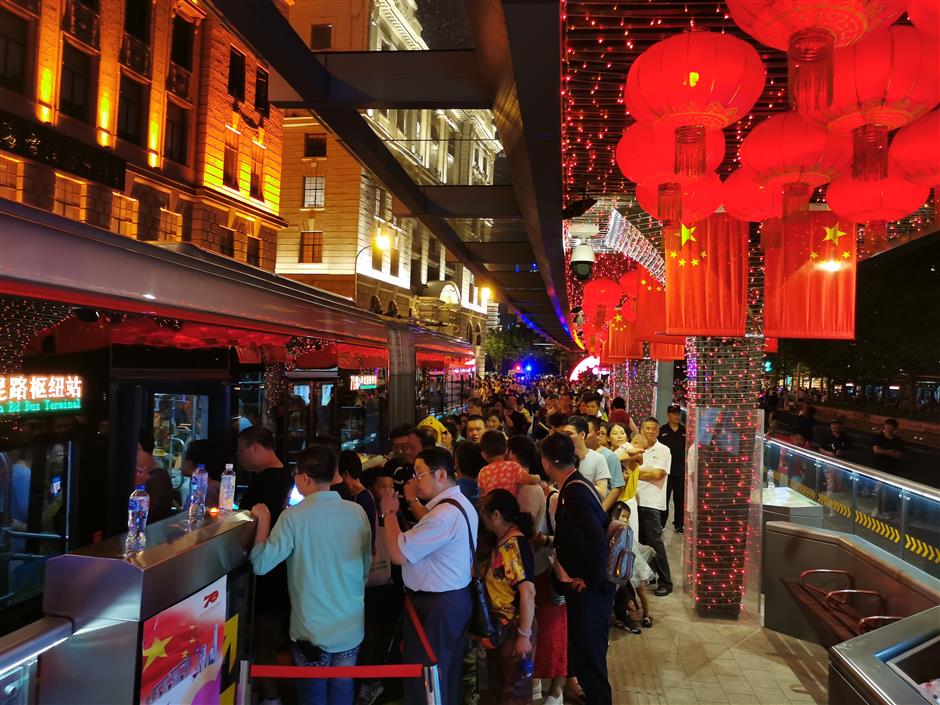 The long queue waits to get on bus 71 on the night of October 3.