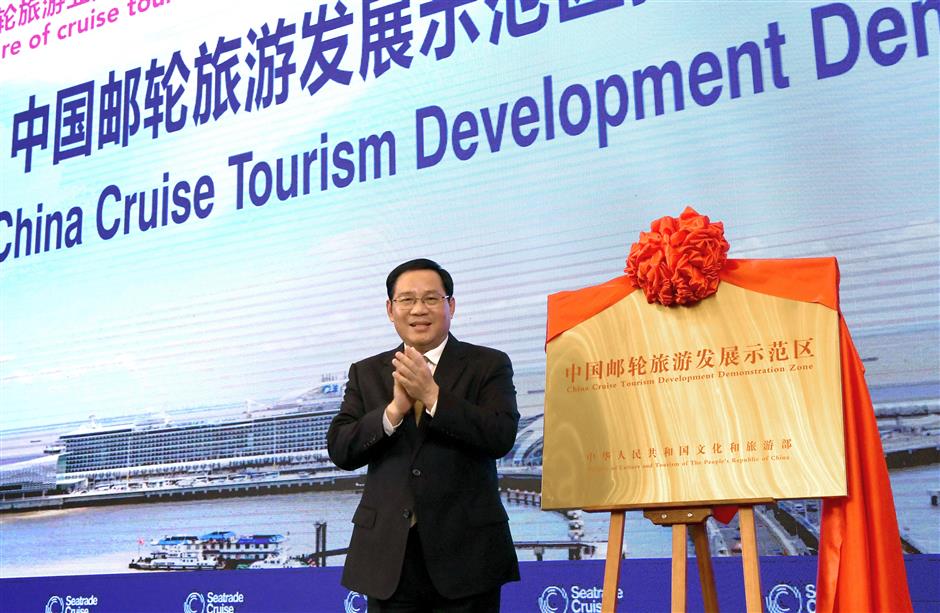 Shanghai Party Secretary Li Qiang unveiled the zone approved by the Ministry of Culture and Tourism at the 2019 Seatrade Cruise Asia Pacific conference.

The cruise liner market in China and Shanghai has great potential and leading cruise liner companies are welcome to increase their investment, expand business and industry as well as cooperate with Chinese companies, Li said.

"Shanghai will further optimize its business environment to drive the development of cruise liners companies in the city," he added.

The new title, an upgrade of the previous “experimental zone” gained in 2012, is a milestone for the city’s cruise liner industry and will help to make “great leaps” in policy innovation, influence scope, growth potential and service standard, according to the city government.

"Baoshan has set an example for other Chinese cities to develop cruise liner business and contribute to the world's cruise liner economy," said Wang Xiaofeng, a ministry official.

The conference, the region's leading cruise industry event, features the latest developments in China's cruise industry via exhibitions, forums and exchanges. It will run through Friday.

Executives from the world’s major cruise lines, government officials and cruise industry stakeholders are discussing the current position of the Asian market,  challenges facing the region and the next steps to ensure sustainable growth.

It is the fourth time Baoshan has hosted the conference since 2016.

The district also released a plan for the development of the demonstration zone and a three-year plan to further develop its cruise liner business.

Shanghai has become the biggest port for cruise liners in Asia and overtook Barcelona to become the world’s fourth largest in 2016 since the Wusongkou International Cruise Terminal in Baoshan opened in October 2011.

According to the plan, Baoshan will focus on the tourism, consumption, market, operation and the whole industry chain of the cruise liner sector to develop the demonstration zone. It aims to become a "highland" for innovative institutions and policies, international cooperation and further opening up to become models for other Chinese cruise liner ports. 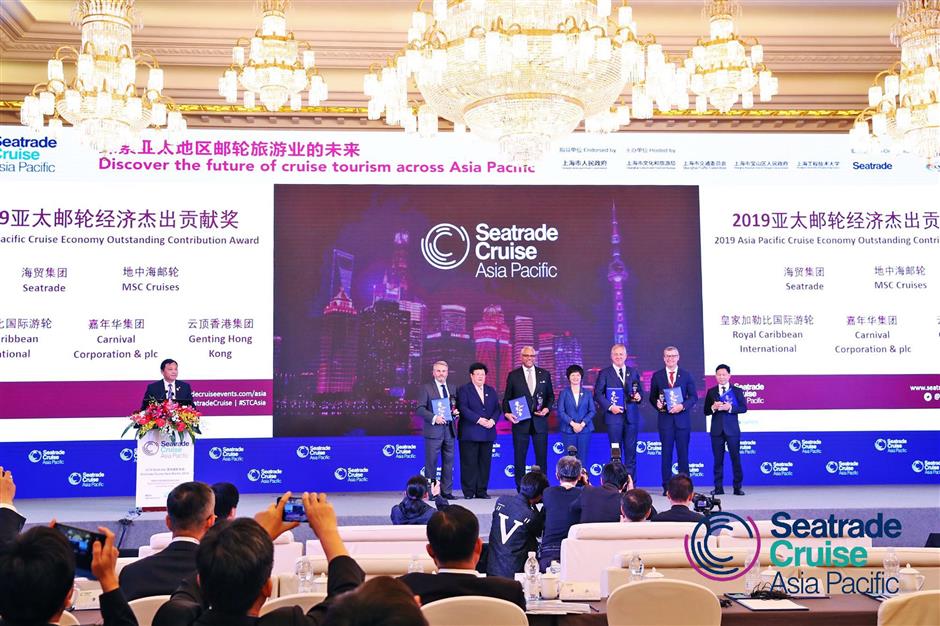 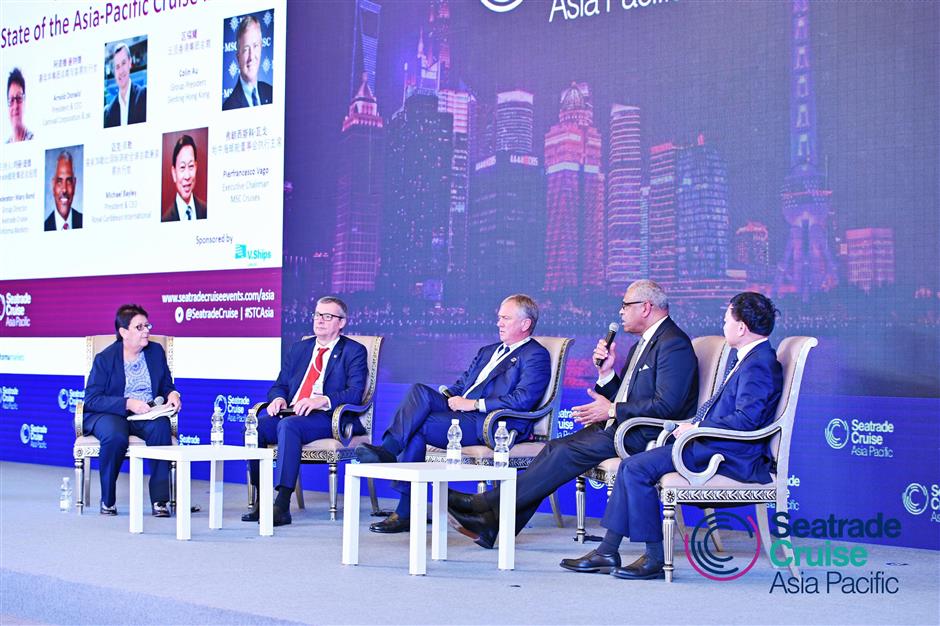 A total of 2,255 cruise ships have been berthed at the Wusongkou terminal as of the end of September, handling 13.48 million travelers from across the world, according to the district government.

A 620-meter new approach bridge and a riverside berth covering 82,000 square meters have also been built to boost capacity and services. Extra electric generators have been installed to power liners while berthed.

China's first inbound duty-free store at a cruise port, to cover 1,700 square meters, will open at the Wusongkou terminal before the second China International Import Expo in November to serve arrival passengers.

The world’s leading cruise liner companies, including MSC, Carnival and Royal Caribbean, announced at the conference that they would deploy their biggest, newest or most high-tech cruise liners to the Chinese market.

Senior officials of the companies said Shanghai had a firm foundation and condition for the development of the cruise line economy.

MSC Cruise said it will operate its flagship MSC Bellissima from the Baoshan port on June 17, 2020, while Costa, Star Cruises and Royal Caribbean plan to base brand-new vessels at the Baoshan port around 2021.

The 172,000-ton MSC Bellissima has a maximum capacity of 5,686 passengers. It will become the largest cruise ship deployed in Asia by the time of its maiden voyage in Shanghai, the company said.

"Adjusting strategies to meet the latest trends in the Chinese market, offering high-quality products and working to ensure the sustainable growth of the Chinese cruise industry will now be the focal points for cruise lines operating in this market," Huang said. 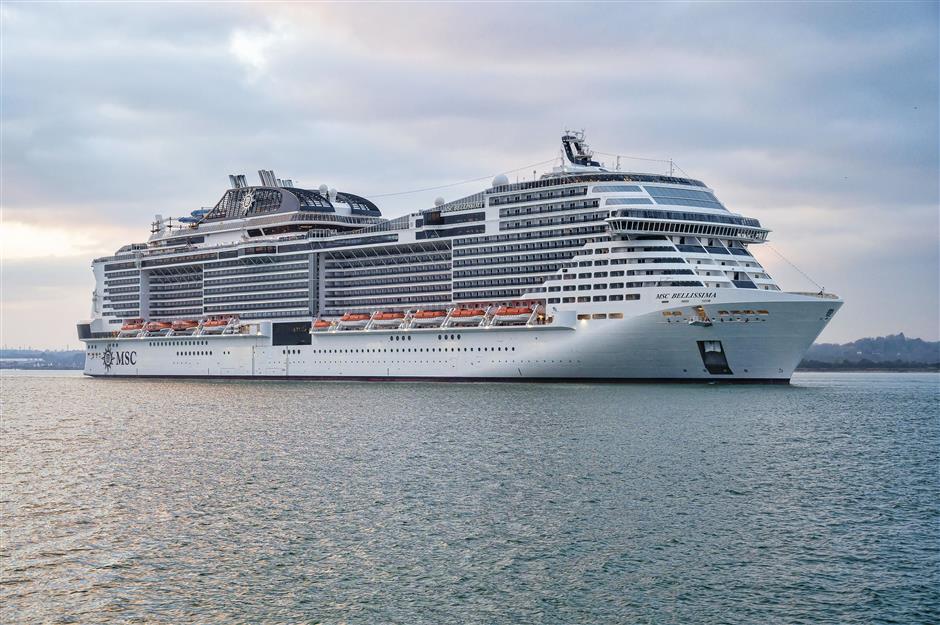 The 172,000-ton MSC Bellissima will be the largest cruise ship deployed in Asia when it sets off on its maiden voyage from the Wusongkou terminal on June 17, 2020.