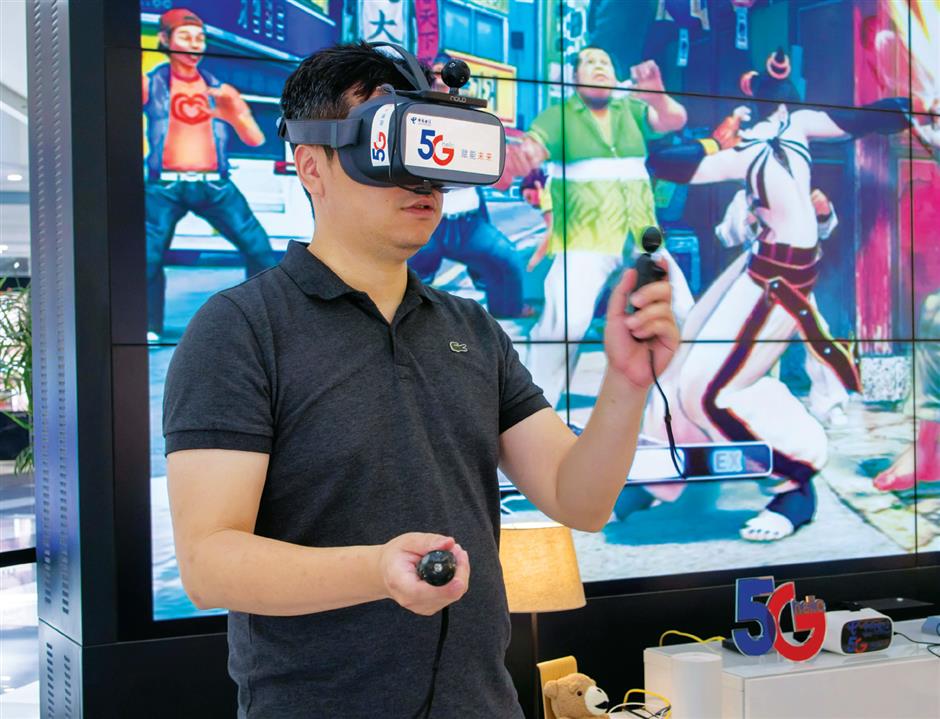 A visitor gets a try on an online game with 5G network.

Hongkou District is striving to become the world’s first district to be covered with gigabit 5G connectivity and broadband network.

The district finished the yearly target of the major carriers, China Mobile, China Telecom and China Unicom, on the 5G base station installation by the end of August to have the most dense 5G network among local districts.

The Hongkou government initially started the arrangement of the new-generation information infrastructure in January 2017 with the support of the city’s Commission of Economy and Informatization. It was approved to build the Superfast North Bund Comprehensive Demonstration Zone, a smart city area, in September 2017.

It signed a strategic cooperation agreement with China’s telecom giant Huawei in July 2018 and started the infrastructure construction in January 2019.

By the end of June, Hongkou has initially finished 5G coverage across the district. It has also optimize the connectivity of 4G network. Neighborhood committees have released posters to encourage Hongkou citizens to report weak signals at local public areas, office buildings, communities and innovation parks.

Hongkou has also improved the Internet speed for key office buildings as part of the efforts to optimize its business environment. The three major carriers have preferential policies to help companies based in Hongkou upgrade their Internet speed. By the end of August, over 120 companies in the district, such as the 1st Engineering Co of China Railway Construction Electrification Bureau Group, Donghai Securities and Golden Education have finished the Internet upgrading to initially enjoy the gigabit Internet connectivity.

Hongkou has also become the first local district to establish an Internet demonstration zone. By the end of September 6, the district had built 610 5G base stations, including 333 from the China Mobile, which means every square kilometer of land has 14 base station of 5G connectivity. Key areas such as the North Bund and Sichuan Road N. commercial street have had the fastest download speed of 1.6 Gbps, while the average downtown speed is above 800 Mbps.

Shanghai General Hospital, for example, has been working with China Mobile on patient information transmission and communication between ambulance doctor and hospital via 5G.

The Hongkou government has released a series of industry guidelines to accelerate the construction and application on 5G network while promoting industrial development. The district aims to become a demonstration area for the city as well as a leading global 5G application zone with preferential policies, complete facilities, open scenarios, technological services, funds, incubation and other services, according to the government.

Regarding the World Artificial Intelligence Conference this year, Hongkou district government signed an agreement with Huawei to develop the innovation center. It will focus on the Internet of things, cloud computing, big data, block chain and AI to serve Hongkou-based companies and attract more to the district.

As a highlight, a 5G industry application exhibition center has been planned at the Huawei innovation center to showcase the latest achievements on 5G applications. There will be various events such as exhibitions, global developers’ meeting and forums for innovation and startup firms from around the world.