From quantum computers to new materials, to climate change and the secret of longevity, there was not an area of science that was not open for discussion at the WLA Young Scientists Forum.

More than 200 young scientists sat down with the Nobel Prize winners to brainstorm the possibilities of science beyond their wildest dreams.

“What brings international scientists here are the central purposes of support for junior scientists,” said Kornberg.

Michel Mayor, a Nobel Prize winner in Physics told Shanghai Daily in an exclusive interview that the most important reason for him to attend the forum was to get in contact with young people.

Akira Suzuki, a Nobel laureate in chemistry in 2010, said that fundamental science was something one should never overlook. Suzuki’s finding, the Suzuki Cross-coupling Reaction, is now widely used in a variety of industries from medical research to new material manufacture. Yet, he insisted, that what he did was simply basic science research.

“Commercialization of science is good, but I always focus on the basics,” said Suzuki, who refused to patent his findings. “I was fortunate that other researchers used our reaction in their productions.”

Though retired, Suzuki said he kept his eyes wide open so that he could spot young talent and give them a hand.

Ten young scientists were invited to share their research achievements on the stage — each of them allowed only five powerpoint pages.

The young scientists shared their insights on medical issues such as looking for a cure for Alzheimer's and the reasons behind premature delivery. They also discussed popular topics like artificial technology and new material.

“It is a rare opportunity for all of us to interact with so many big names,” said Li Weidong, a brain scientist from Jiao Tong University who was also the secretary of the WLA Young Scientist Forum. “More often we meet people from our field but miss out on chances to talk to scientists from other disciplines.”

Wang Liping and Zhu Yingjie, two brain scientists based in Shenzhen in Guangdong Province, sat with Li and one of the Nobel laureates Gregg Semensa.

“We do not worship those who win the prize,” said Zhu. “Instead, we hope to know more about the details or even anecdotes of their findings that can inspire me and other young scientists.”

Li said by focusing on different parts and functions of the human brain, the table found a common ground to talk — sleep.

“It was fascinating to see the insight of other scientists on issues of sleep,” said Li. “It might hold the secret of longevity.” 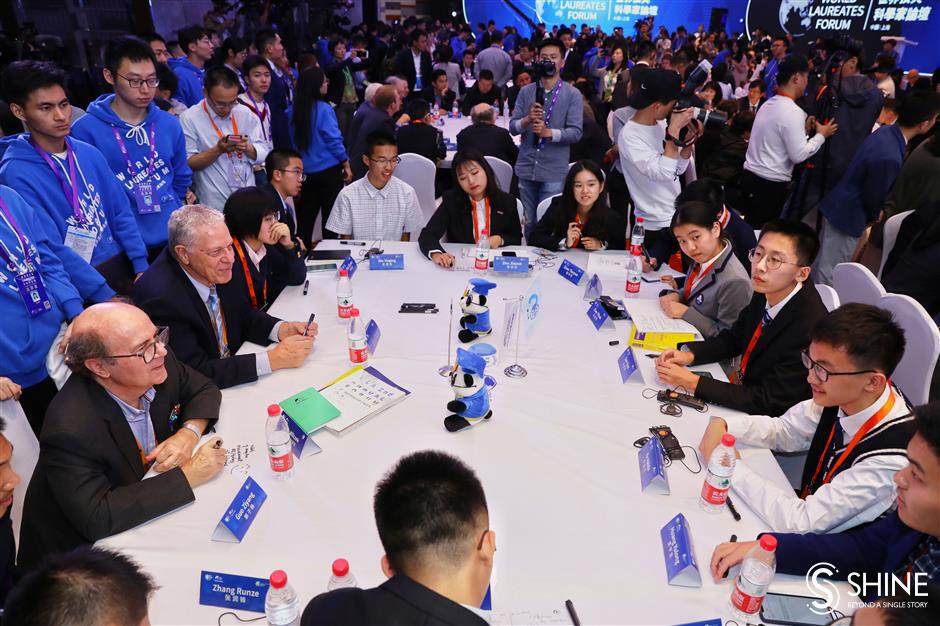 “Everyone brought good ideas to the discussion,” said Taylor. “We discussed topics as diverse as quantum computers to new materials.”

He said the best thing for young scientists was to be curious and be passionate about solving problems.

Zou Jiayun was on the table with Taylor and Wilczek. The second-year student from Jilin University is a chemistry major.

“I majored in chemistry, but the two professors are physics experts, which forced me to come up with interdisciplinary ideas," Zou said. She quizzed the experts if it was possible to generate hydrogen from water with physical methods as the chemical way was too expensive to be commercialized.

“It was really a thought-provoking discussion and pushed me to think outside the box,” said Zou.

One of the topics of discussion was the struggle that young scientists had to go through, both financially and mentally, as they had to spend a considerable amount of time and energy — and money — to get their works published and recognized.

Serge Haroche, who won the Nobel Prize in physics, said the forum should discuss the issue.

“The WLA can keep money aside for young scientists so that they can do their research,” said Haroche.

Li also addressed the possibility of helping young scientists financially through the forum. He told Shanghai Daily that compared with the last year's forum when they had only weeks to invite the scientists, they started preparing for this year's forum more than two months ago.

“I think the next forum will be even better, as we are thinking about raising more funds for young scientists worldwide with the influence of all these established scientists.”

Kornberg was glad to see that the forum was well-connected with the Shanghai government this year, and expects more collaboration and interaction in the future for sure.