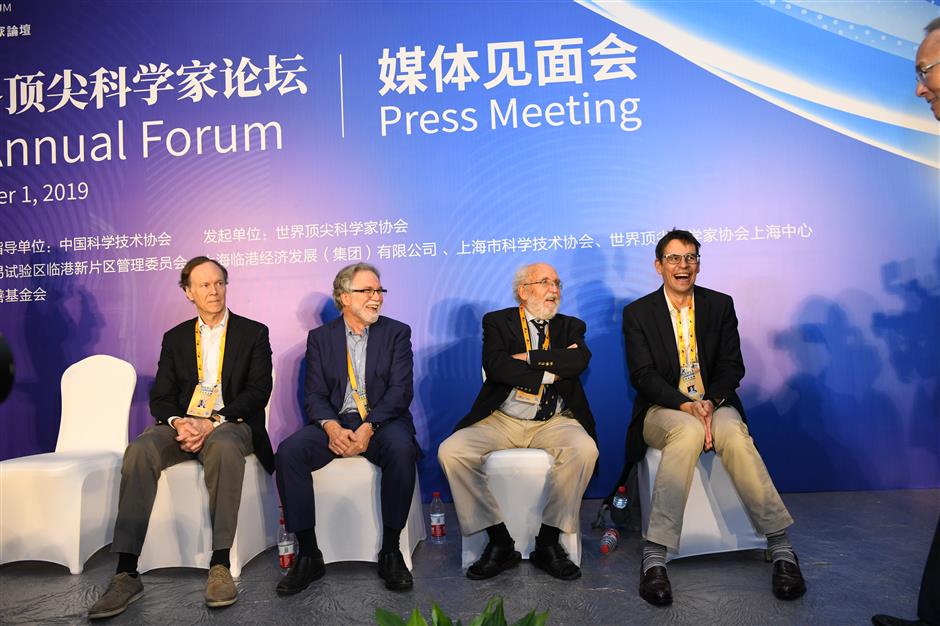 Four Nobel Laureates said that science had no boundaries and called for more global collaboration at the WLA Forum in Lingang new year on Wednesday.

William Kaelin Jr and Gregg Semenza, Nobel Prize winners in medicine, and Michel Mayor and Didier Queloz, Nobel laureates in physics, sat down together to trace the roots of their inspirations for doing the academic research. Kaelin and Semenza focused on one of the smallest properties possible in the universe while Mayor and Queloz looked up into the vast scope of infinity.

Mayor said he was working with scientists from China over 30 years ago before he and Queloz, who was his Ph.D. student, discovered 51 Pegasi b, the first extrasolar planet orbiting a sun-like star, 51 Pegasi.

“At that time scientists from Russia, China, and South America were all working together,” said Mayor. “Science doesn’t belong to one country.”

Queloz said the ideal world for science would be one where scientists can set up international cooperation without restrictions.

“Scientists should be able to travel, to have access to documentation,” he said. “It is the only way to mobilize all the brains and ensure progress.”

Samenza added that scientists should have the freedom to challenge the well-established norms so that they can make real breakthroughs. A cultivation system encourages creative thinking that can be vital for a youth seeking a career in academics.

Kaelin argued that scientists should be citizens of the world. It was a topic that all scientists had been talking about at the forum. He said the world has seen unprecedented investment in science by China, so his expectations were high that China will continue to be a leader in science.

But he also sounded a cautionary note, saying people who invest in science should never overlook the fundamental researches. Some investors may be looking only at short-term returns.

“Many countries are tempted to tie their science investment to the so-called ‘deliverables,’” Kaelin argued. “Investing fundamental science with applied science is the only way forward.”

Steven Chu, former United States Secretary of Energy and the winner of Nobel Prize in physics, expressed concern about the rise in populism in some countries, including the United States, on building borders to prevent immigrants and students from studying overseas.

“It was always a great advantage to the United States that we had such outstanding students from all over the world,” said Chu, himself a child of immigrants.

Chu said he hoped it was only a temporary factor and that it would pass away soon.

“I hope things will return to normalcy with open borders and sharing ideas,” said Chu. “Students all over the world, and us, all benefit from it.”