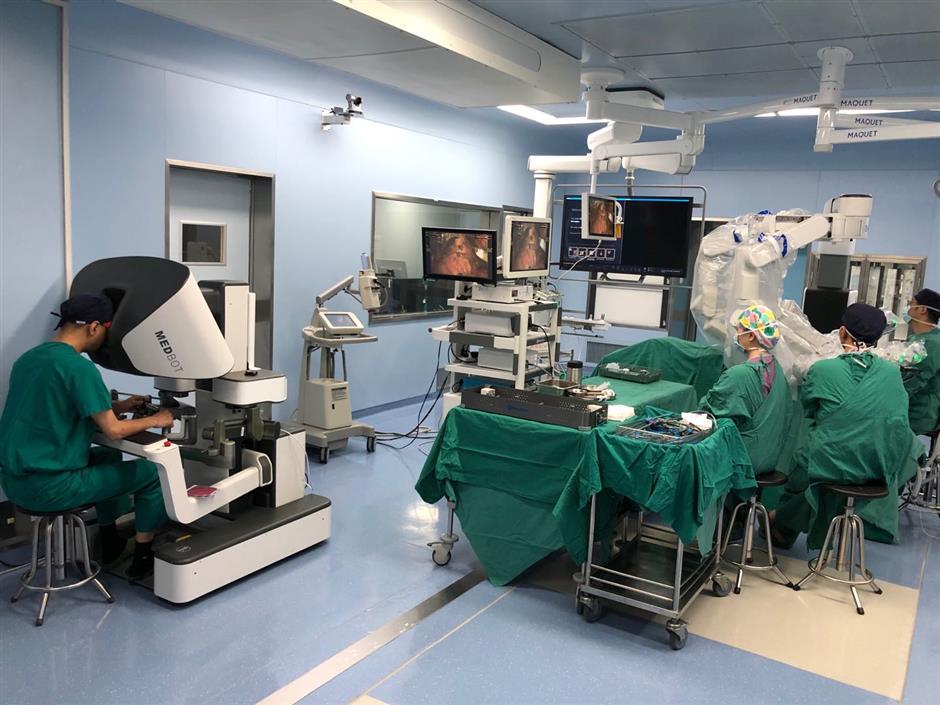 A Shanghai-produced surgical robot completed its first prostatectomy on a 65-year-old cancer patient in Shanghai on Friday, a milestone in breaking a foreign monopoly.

The Toumai laparoscopic surgical robot, developed by MicroPort based in Zhangjiang High-Tech Park in the Pudong New Area, helped Sun Yinghao, of the urology department at Changhai Hospital, to complete a robot-assisted laparoscopic radical prostatectomy. The surgery at Shanghai East Hospital in Pudong took about 1.5 hours.

Robotic surgery has become an effective treatment for prostatic cancer, with less trauma and quicker recovery. A 3D view allows doctors to perform more precise and accurate surgery without cutting the patient open.

Since the first robot-assisted prostatectomy was conducted in 2000, over 85 percent of such procedures in the US have been being performed by surgical robots.

"Robot-assisted surgery offers a better solution for various diseases, such as prostatic and kidney cancers," Sun said after the operation. "The Toumai system can fully meet the demands of surgeons with high-definition 3D views and smart robotic arms," he added.

Currently, laparoscopic surgical robot systems are monopolized by foreign manufacturers. China has imported about 100 such robot systems that have helped complete over 115,000 operations. The top eight hospitals with the largest number of robot-assisted surgeries are in China.

However, imported robots are expensive to buy and to maintain. It costs 25 million yuan (US$3.6 million) to buy one with another 1.2 million yuan in maintenance costs every year. Chinese patients have to pay about 26,000 yuan for supplies for a single operation.

Laparoscopic surgical robots are one of the most important research directions and among the few fields still monopolized by foreign manufacturers, said He Chao, general manager with MicroPort.

Hong Kong-listed MicroPort Scientific Corporation was established in Shanghai in 1998. It has become a leading medical device company, releasing the world's first targeted-drug-delivery heart stent and China’s first pacemaker made to international standards.