Rail shipping between China and Europe about to get even faster 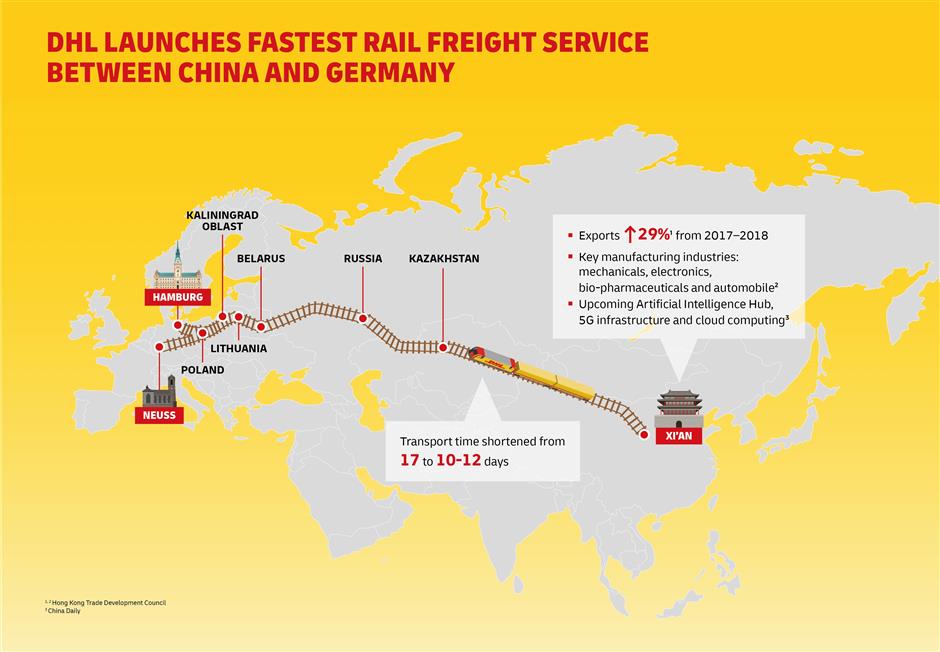 A map of the newly launched rapid rail freight service between China and Europe.

A new rapid rail freight service between China and Europe will be unveiled at the upcoming second China International Import Expo (CIIE) to help boost trade along the Belt and Road Initiative.

Global logistics giant DHL will highlight the new rail freight service between China and Germany at its exhibition at the CIIE, along with other logistic services involving artificial intelligence, robotics and blockchain, the company said on Monday.

The rail service connects Xi’an in northwest Shaanxi Province with Hamburg and Neuss in Germany, and cuts the transit time to about 10 days, down from at least 17 days previously.

The new express rail service is the first of its kind between the two regions to break new ground in the speed and efficiency of China-Europe rail freight. It shortens total transit time by traveling through the Mamonovo-Braniewo railway border between Russia and Poland, according to the company.

“Xi’an is at the heart of the New Silk Road Economic Belt, taking on the same important role as it once did during the ancient route of Marco Polo’s era,” said Steve Huang, CEO of DHL Global Forwarding China.

The new rail service follows a 9,400-kilometer route through Kazakhstan, Russia, Belarus and Lithuania to Kaliningrad Oblast, part of the Russian Federation on the south coast of the Baltic Sea, before entering the European Union via the Mamonovo-Braniewo crossing.

The final stretch of the route crosses Poland into Germany to the port city of Hamburg, and to Neuss, an important logistics hub on the Rhine River across from Düsseldorf.

Two test operations have been conducted on the new route, assuring that transit time and quality can be ensured, Huang said. The service will offer a third option besides more expensive air freight services and slower shipping services, he added.

DHL began researching the railway service between China and Europe in 2008 amid increasing trade volumes between the two regions. It launched the first China-Euro rail service in 2013 and has continued improving and expanding the route to facilitate the Belt and Road Initiative.

Meanwhile, special economic zones in Xi’an are attracting growing foreign investments as the city positions itself as a hub for Artificial Intelligence, 5G infrastructure and cloud computing to enhance its manufacturing capabilities.

Apart from the new rail connection, DHL will showcase its charter flight and rail-shipping freight services at the CIIE, which will run between Tuesday and Sunday at the National Exhibition and Convention Center.