Chen Xingzhi, 70, has been making sachets for 17 years since her retirement.

Fragrant sachets, or perfume pouches, were essential daily items in ancient times. They date back to the Warring States period and were used to guard against disease, according to historical records.

"In May, it is the plum rain season in Shanghai and the Jiangnan area (regions south of the lower reaches of the Yangtze River) and our ancestors used traditional Chinese medicine and herbs to fill sachets, to expel insects, exorcise evil spirits and dispel dampness since ancient times," said Chen.

"In Jiangnan, there is the tradition of wearing sachets during the Dragon Boat Festival," she added.

"Making sachets involves eight to 10 procedures, and it is complicated from cloth selection to pattern," said Chen. "The thickness, texture and pattern of cloth are all taken into consideration.

"It can take half a day for sachet embroidery depending on the complexity of patterns," said Chen. 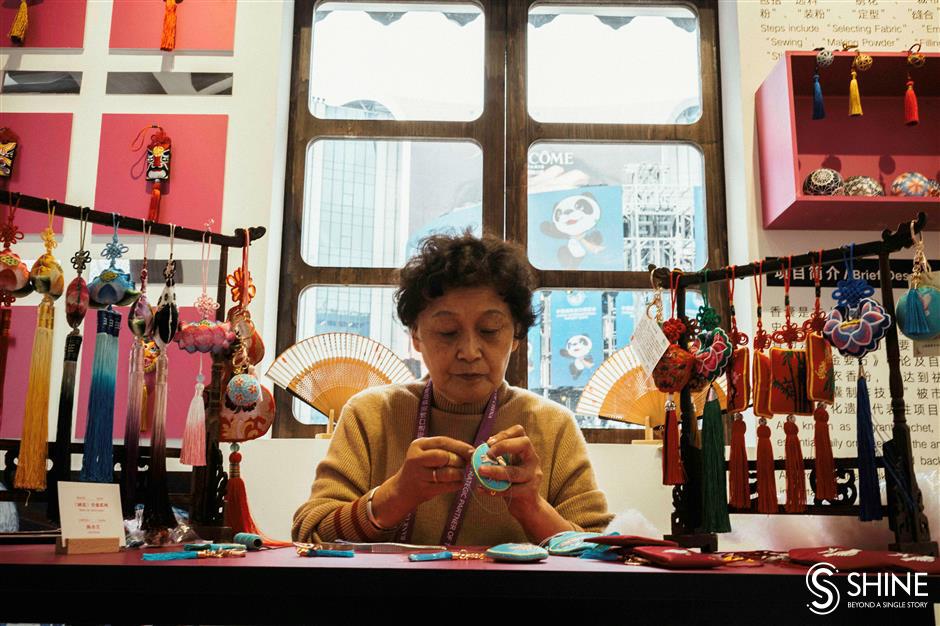 Chen Xingzhi, 70, is displaying her sachet making skills at the expo.

Auspicious patterns such as dragon and phoenix or those bearing the wish for prosperity in the new year are commonly used on sachets, said Chen. "Sachets in Shanghai also embody haipai (the unique Shanghai style of East-meets-West) culture and Jiangnan culture."

"During my childhood, the older generation taught me how to make sachets, and after retirement, I have kept making sachets for 17 years out of interest as I want to preserve it," she said.

Chen has designed a sachet for the expo with patterns of four leaves, the shape of the National Exhibition and Convention Center in Qingpu District, and white magnolia, the flower symbolizing Shanghai.

It also has a shaking hands pattern, expressing a warm welcome to guests from home and abroad, she said.

She teaches people how to make sachets at schools and residential communities in her spare time.

"I am happy that many youngsters love it," said Chen.